Gun Sales Spike in 2020, Driven by New Purchases by Black Men and Women

Gun sales have spiked in the first half of 2020, driven by a large increase in sales to black men and women. Overall, gun purchases were up 95% over this time last year, and ammunition sales were up 139%. The largest increase in gun sales by demographic came among blacks, with purchases up 58%.

The National Shooting Sports Foundation (NSSF) released a survey of firearms retailers that broke down the sales surge by demographic. “Firearm and ammunition retailers have been busy, really busy, during the first six months of 2020,” NSSF writes, “and they are not just selling to what many thought to be the traditional customer, older white males – as new NSSF research shows customers of all demographic backgrounds are part of this ongoing sales surge.”

How much higher are gun sales in America? A record 10.3 million firearms were purchased in the first half of 2020, according to NSSF’s adjusted NICS data. They report, “The highest overall firearm sales increase comes from Black men and women who show a 58.2 percent increase in purchases during the first six months of 2020 versus the same period last year.” They previously estimated that 40% of all gun sales went to first-time buyers.

NSSF lists the overall demographics for gun sales in the first half of 2020:

Another report from NSSF goes into a bit more detail about gun sales to blacks, women, and other non-traditional groups:

For any number of good reasons, women and minority firearm ownership are on the rise and growing quickly.

Maj Toure, founder of Black Guns Matter, promotes African American gun ownership and spends his time advocating firearm ownership and teaching gun safety in urban and minority communities. He spoke to Business Insider about the growth and success of his efforts. “People somehow forget that we have the right to defend our lives with firearms,” Toure said.

The National African American Gun Association boasts membership growth of 15,000 new members in 2020 so far. “A lot of times in our community, we hear a lot of our politicians, unfortunately say, don’t have a gun. You don’t need a gun,” explained NAAGA founder Philip Smith. “Well, I pushed back on that and say, that’s the very thing that we do need.”

Women aren’t just standing by either. In 2003, only 13 percent of women identified as gun owners. Fast forward to 2020 and that number totals nearly 25 percent. According to a recent Pew Research Center survey, 25 percent of those female gun owners say self-protection is their main reason for owning a gun, and 70 percent say owning a gun is essential for their personal freedom.

NSSF provided an infographic for download to show all the ways in which gun sales have spiked in America: 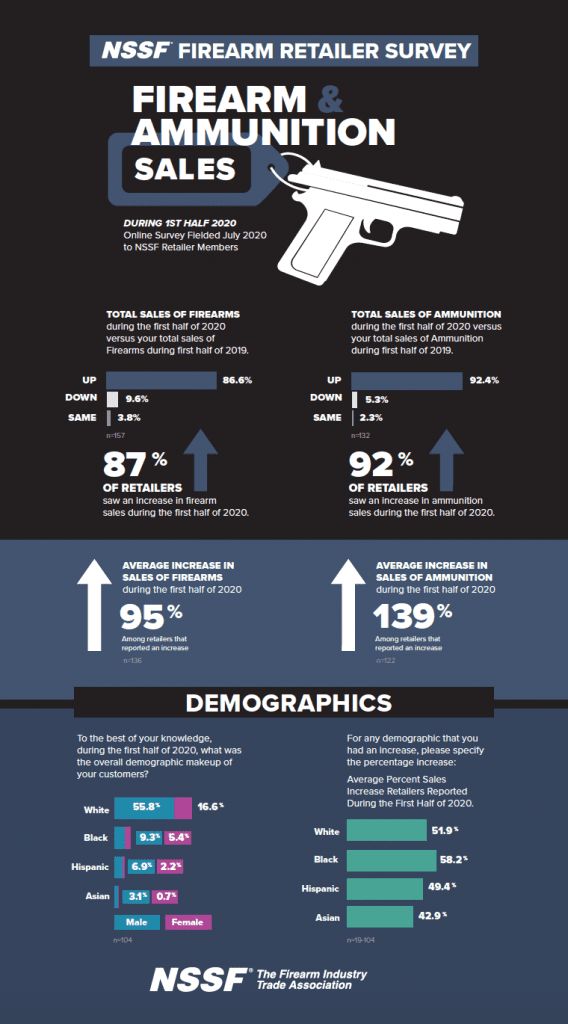 Jeff Reynolds is the author of the book, “Behind the Curtain: Inside the Network of Progressive Billionaires and Their Campaign to Undermine Democracy,” available at www.WhoOwnsTheDems.com. Jeff hosts a podcast at anchor.fm/BehindTheCurtain. You can follow him on Twitter @ChargerJeff, and on Parler at @RealJeffReynolds.

State-Level Gun Restrictions: Get Ready for a Conservative Wave In 2020 Elections