A 29-mile convoy through southern Oregon, followed by a rally, followed by a direct appeal to the White House, and a decision by the Department of the Interior. That’s what it took to open up irrigation water for farmers in southern Oregon last week. It all started with one of the biggest protests you probably didn’t even notice.

In a June 9 press release, the Bureau of Reclamation announced that it had restored the 140,000-acre-feet of water originally promised to farmers in the Klamath Basin at the beginning of the season:

Today, the Bureau of Reclamation confirmed the 2020 water supply for the Klamath Project. The Klamath Project delivers irrigation water to approximately 230,000 acres in southern Oregon and northern California.

On June 2, the Natural Resource Conservation Service forecast for Upper Klamath Lake inflows increased from the May 1 forecast. Based on the updated forecast and ongoing stakeholder input, Reclamation will deliver approximately 140,000 acre-feet to the Klamath Project from Upper Klamath Lake in 2020. Additionally, Reclamation is convening an emergency meeting of the Flow Account Scheduling and Technical Advisory team to discuss flow measures that will benefit endangered fish on the Klamath River.

“This has been a devastatingly dry year and difficult for all stakeholders in the Klamath Basin,” said Commissioner Brenda Burman. “Reclamation has worked to find achievable solutions for the limited water supply in the basin. Although the project remains at a painful, record low allocation, I am pleased that the recent improvement in lake inflow allows Reclamation to stabilize water supplies for Klamath Project water users this year. Continued input from stakeholders and resources agencies will be important as we navigate the immediate drought and seek long-term solutions.”

The Klamath Project water supply supports farms and the hard-working communities that depend upon agriculture as a way of life, in addition to migratory bird refuges, endangered fisheries and Tribal needs. As the details of the water year unfold, Reclamation will continue to adaptively manage the basin’s limited water supply with input from stakeholders.

This follows a large rally held by farmers, ranchers, and residents all across southern Oregon to protest the broken promise of water for irrigation. One of the rally organizers, Bob Gasser, told PJ Media in an interview that he expected maybe 500 trucks and tractors to arrive for the rally, but they ended up with over 2,200 vehicles in the convoy. Gasser says they chose a convoy over a rally due to concerns over COVID-19. The convoy took place over Memorial Day weekend and attracted more than 4,000 people.

Normally the farms in the basin use 350,000 to 400,000 acre-feet of water. This year, due to drought conditions, the Bureau of Reclamation agreed to release only 140,000 acre-feet. Farmers made plans based on that amount and set about preparing their fields for planting. This preparation involves a significant investment in fertilizer, pesticides, and other materials used to maximize crop yield.

After farmers made these investments early in the spring, the biologist who works for the local Native American tribes called for a flushing flow downriver to rid it of a parasitic bacteria, Ceratonova Shasta, that infects salmonid fish species. This action imperiled the plans to release irrigation water. The amount dedicated to farming was reduced to 80,000, and then later, 50,000 acre-feet. The farmers in the basin were devastated.

Upper Klamath Lake has been the center of a decades-long dispute over water use, a controversy that echoes much of the history of Western states. The lake is very shallow, with an average depth somewhere between ten and fifteen feet. It’s 20 miles long and 8 miles wide. The federal Bureau of Reclamation built the Link River Dam in the early 20th century to supply water for farms by diverting some outflow from the south end of the lake. However, local Native American tribes have claimed that they should have control over Upper Klamath Lake, and two endangered suckerfish have brought environmental concerns into the fight over who gets to use the water.

Complicating matters further, the National Marine Fisheries Service controls the water in the river, while the Oregon Department of Fish and Wildlife administers the lake water.

So when Gasser and the other organizers put together the rally, farmers were faced with financial devastation. People came from all over the region to show their support. They described the scene on their website, ShutDownAndFedUp.org:

By the time the line of machinery made it to downtown Klamath Falls, the convoy was reaching 29 miles long and participants were being asked to reroute to Scalas’ field in Midland. As the convoy made the loop through downtown, crowds of supporters lined the sidewalks, cheering as the log trucks and hay haulers blasted their air horns. Between the din of the machinery and the crowds enthusiastically trying to match decibel for decibel, the streets had the air of celebration. The motorcade was courteous, staying the right lane while letting other cars in out of the area.

As people started heading to the rallying point in Midland, intersections near the site started to clog up. Eventually another opening was created to allow convoy into the field. Approaching the field and looking towards the highway, it looked like a farm show with everything from old tractors to combines crowding the parking lot and lining the field around the crosses. Two buckets from the 2001 Bucket Brigade were onsite, reminding us all that we’ve been here before.

Speakers were supposed to start around 1 pm; but the enormous mass of the convoy pushed it back for nearly two and half hours. Dust filled the air like a warning of what was to come if the water was shut off, and people patiently waited for the convoy to get its entirety into the field and the speakers to begin.

Over the last 20 years, various Federal agencies enforced regulation throughout the Klamath Basin, putting communities up and down the river in peril without providing any results. While that was one of the messages of the Convoy For Change, our tractor rally also highlighted another message – when Klamath Basin ag stands together, our friends join us and we unite as a force to be reckoned with. A 29 mile long motorcade is proof.

Rally attendees helped to plant 2,000 white crosses in a field. The website explains the reasoning:

At our rally following the Convoy For Change, we encouraged attendees to plant a cross. With 2,000 crosses planted in the field, we plan to leave them up as a protest and to draw attention to why we’re here and what the Shut Down & Fed Up movement is about.

We chose white crosses because of what they represent to our community – loss. Each cross represents a farm or farmer lost in the 2001 Klamath Project shutdown as well as the family farms and ranches we stand to lose in potential 2020 shutdown. And if you happen to drive along Hwy 97 through Midland and see the field of crosses, you can see we’ve lost a lot and stand to lose more.

The Klamath Basin also had a lot of young men fight for our nation in World War I and World War II. Since the Tulelake homesteads were settled by veterans of those wars, it only seemed fitting to use crosses, much like those used in the monument at Normandy representing the allied forces taking of that beach from Nazi Germany.

The rally organizers also invited Congressman Greg Walden (R-Ore.) to speak. Later, Walden made contact with the White House to express his concerns over shutting off the irrigation water. President Trump’s Department of the Interior, under Secretary David Bernhardt, responded by ordering the full original 140,000 acre-feet of water to be released for irrigation, as planned.

The huge rally ended up being a huge success. The farmers in the region still face smaller crop yields this year due to the drought. At least they haven’t had the rug completely pulled out from under them, thanks to the Trump administration restoring the original promise of irrigation. 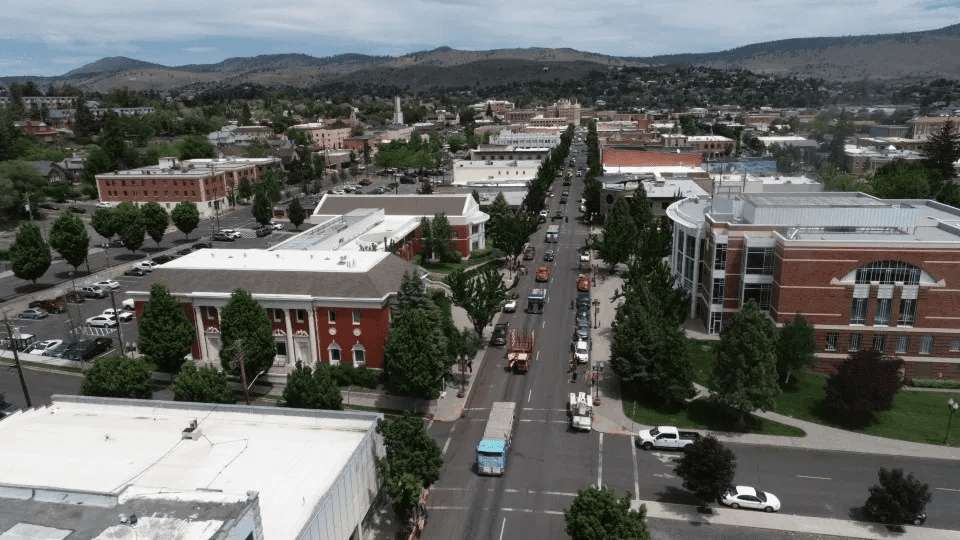 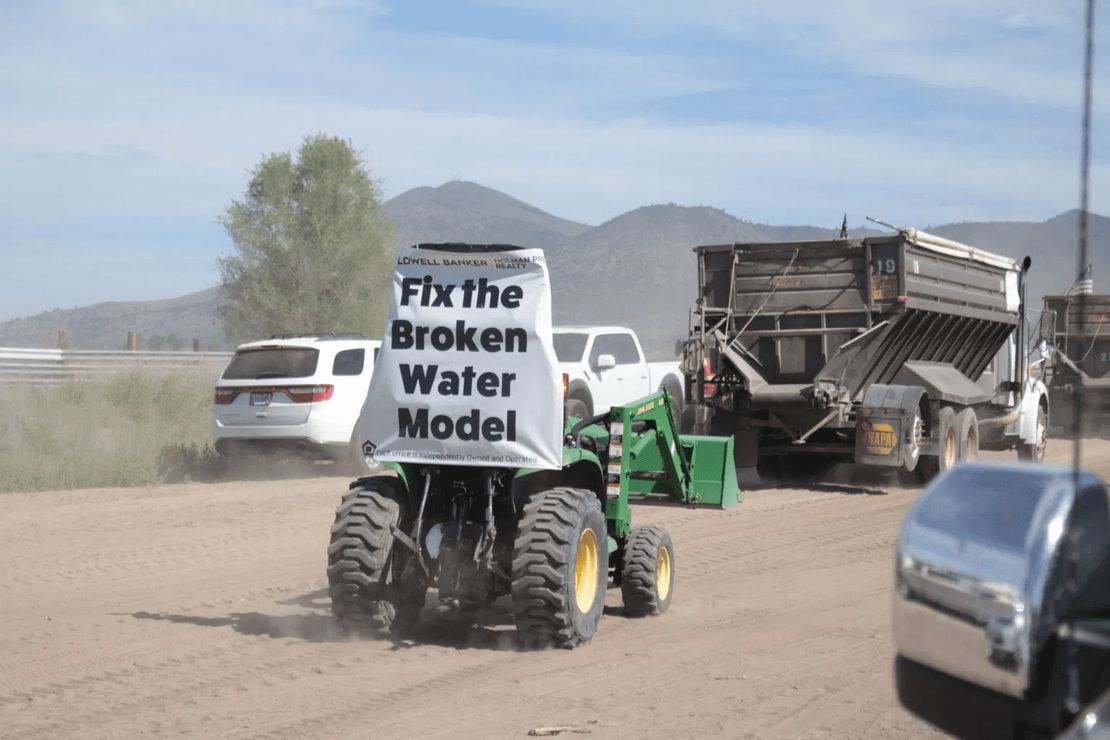 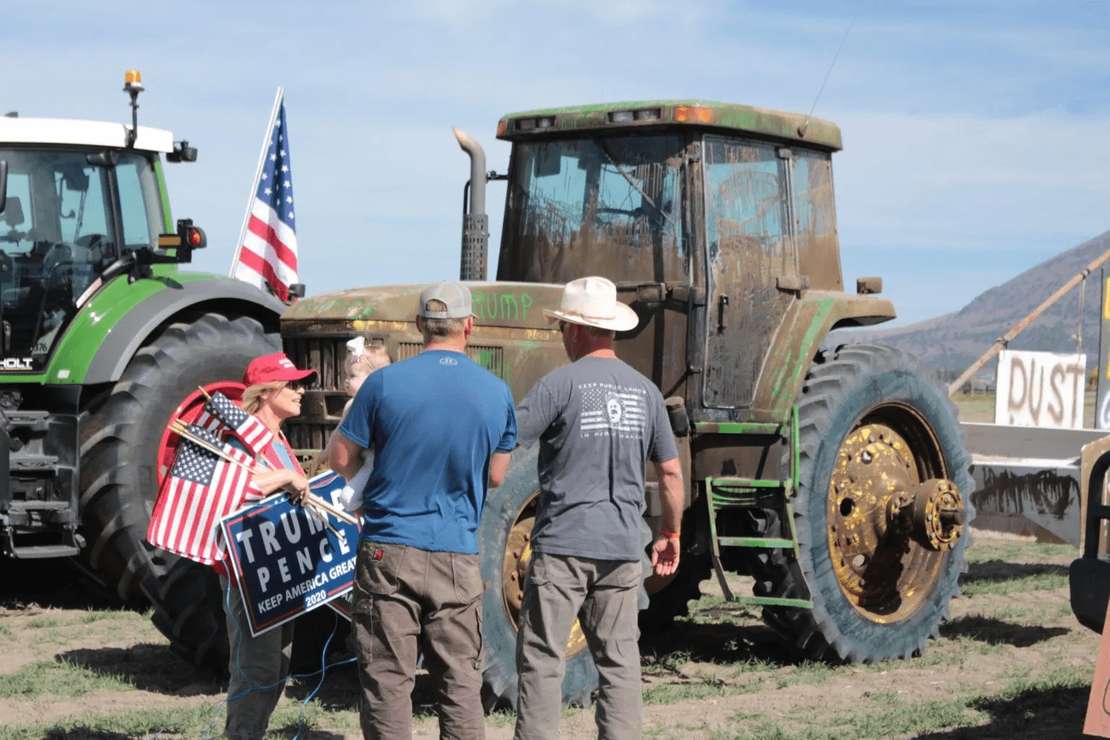 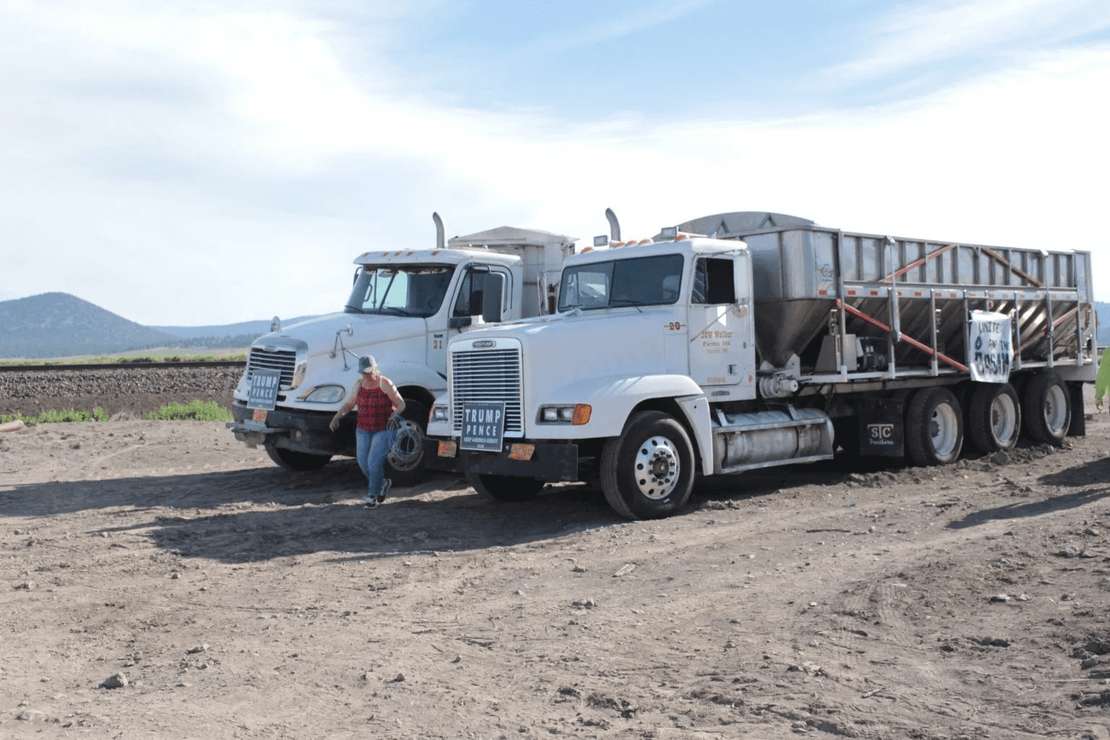 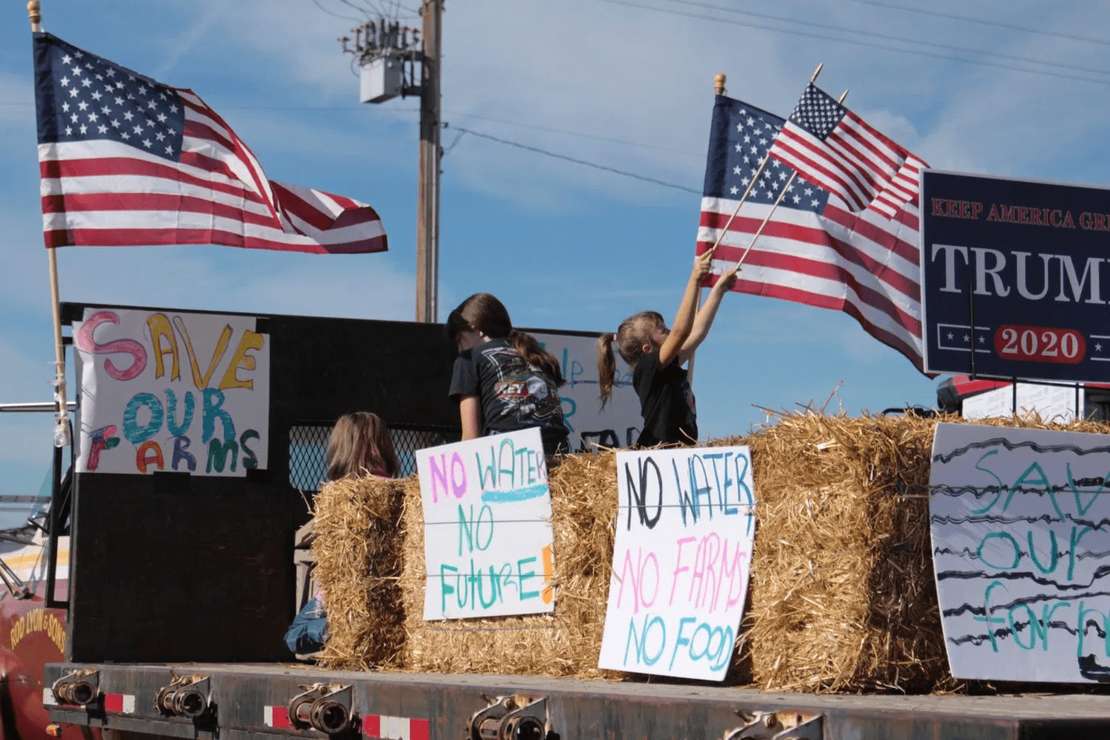 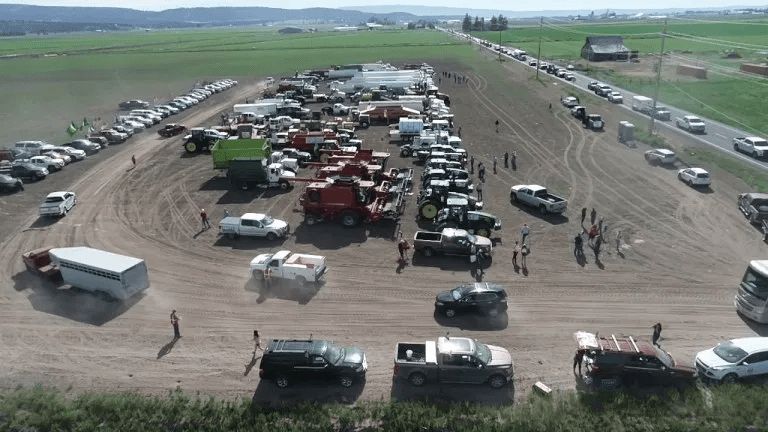 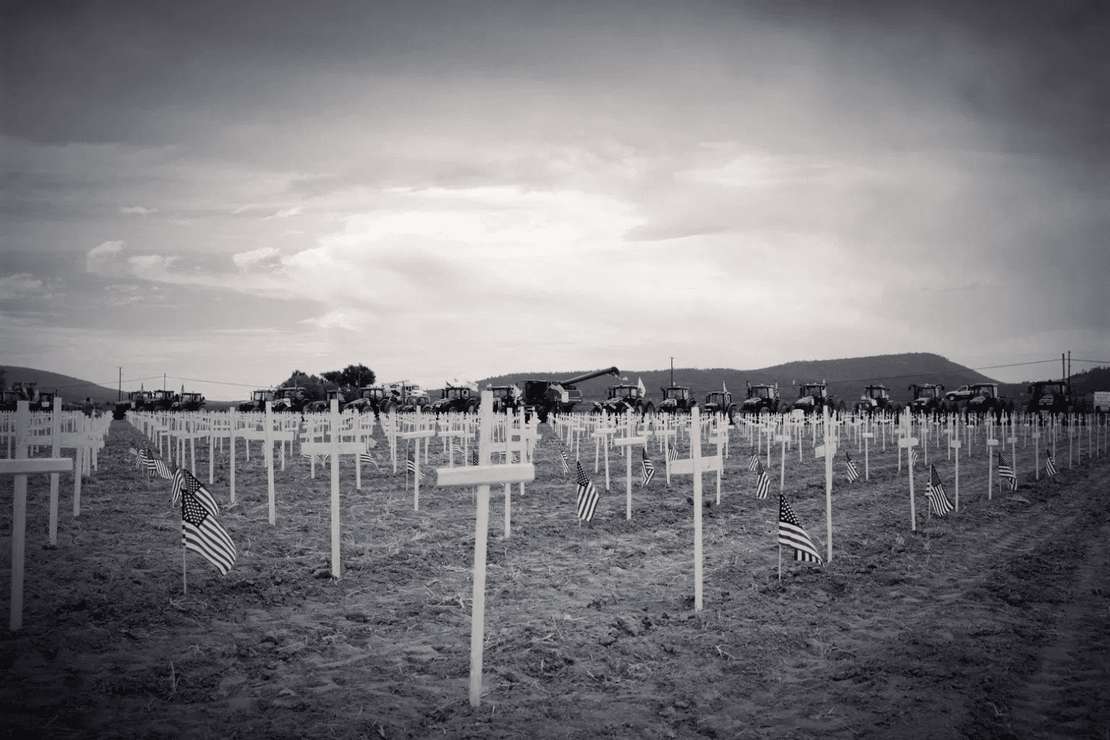 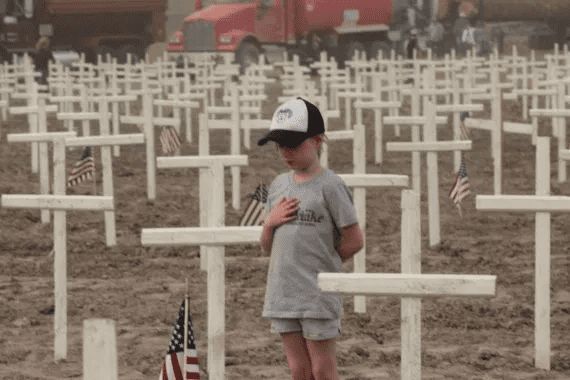