Before getting into the meat of this piece I should disclose a thing or two. I know Aaron Peña pretty well. We’ve worked together in state government. Before that, when he was a Democrat state representative from the Rio Grande Valley, I knew him from the opposite side of the aisle. I was communications director at the state Republican Party. I knew state Rep. Peña then to be a thoughtful, smart Democrat who was well-liked in both parties and conservative in philosophy. He also seemed a little out of place with the Democrats. When he officially switched parties several years back, I was pleased to be at the switching ceremony in Austin. The Texas GOP had won a good man who was switching on principle for the same reasons Ronald Reagan and then-Gov. Rick Perry had both switched parties: The Democratic Party had gone too far left and left them and their values behind.

The same can be said for Texas Hispanics — “Tejano” or “Tejana” — who are redshifting. The Democrats of Texas have long, as in 30 years or more, believed that the Hispanic vote would eventually hand them total control of Texas forever. They believe they need not adjust their policies on faith, family, life, the Second Amendment, taxes — anything — because the party brand itself was enough. If it wasn’t, then they would resort to bullying. They could go all the way left to Wendy Davis and Karl Marx if they wanted to — and they have — and the Hispanic vote would save them.

But a funny thing happened along the way. People like state Rep. Aaron Peña switched parties on principle and others followed them. And more are following them. His daughter, Adrienne Peña-Garza, is quoted in this Texas Monthly story regarding how the Democrats operate when it comes to independent-minded folks like her father and herself.

Peña-Garza, the Hidalgo County Republican chair, said Hispanic South Texans, who have long been conservative, “have become liberated” to vote on their long-held beliefs. “People have been bullied into voting Democrat. If you got involved [in conservative politics], people said, ‘I’m not going to give you this contract; I’m not going to give you this job.’ But I think the bullying has backfired. People are more empowered and courageous.”

She’s on the cover too. 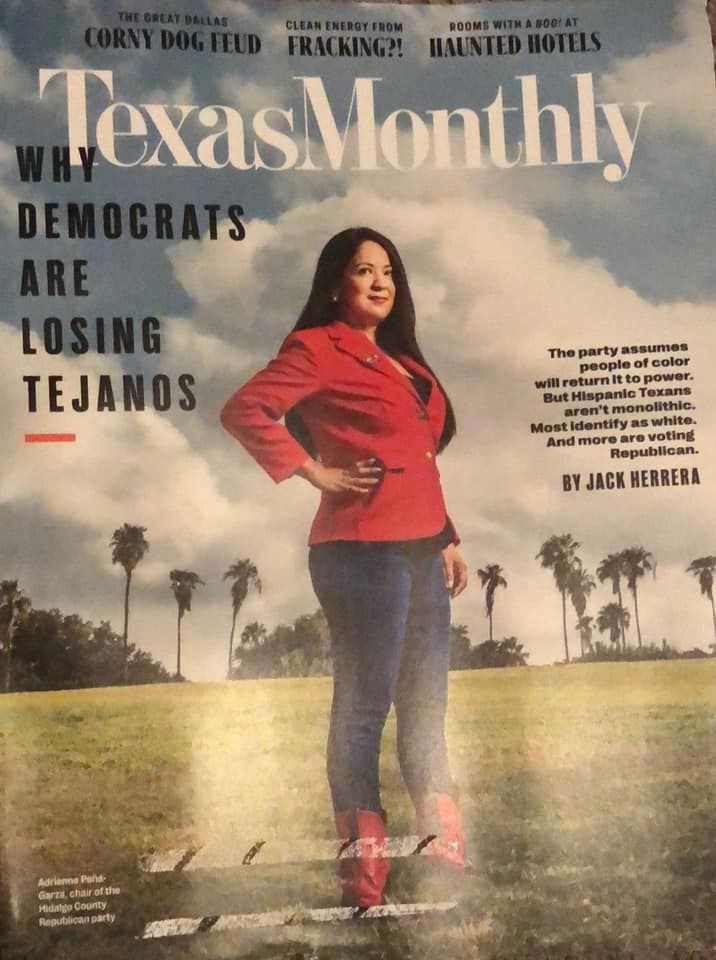 When I was reporting on border issues in Hidalgo County during my first stint with PJ Media, I’d hear about the bullying she mentions but it wasn’t provable. Rampant and endemic, but hidden with no paper trails. Tejanos and Tejanas started standing up to it a decade ago, some by running for office, others by working courageously together underground and actually going after some of the political criminality. People noticed. Groups like Hispanic Republicans of Texas and the Conservative Hispanic Society rose up to answer the call outside any party structure. One of the most popular and successful talk radio hosts in the Lone Star State is my friend Chris Salcedo, the “liberty-loving Latino.” The conservative juggernaut is heard expounding on the joys of freedom and how Democrats would take it away on the air every day in Houston and Dallas and nationally on NewsmaxTV.

Related: The Man from Lampasas: A Cinco de Mayo Story

People are noticing how embarrassingly paternalistic and out-of-touch the Democrats are when it comes to South Texas. They really don’t know Texas at all and haven’t bothered to understand.

Banking on an identity-based appeal, Democrats last year trotted out the sort of bilingual messaging in South Texas that has played well among Mexican Americans in Los Angeles and Puerto Ricans in New York, focused on a celebration of diversity and immigration. Republicans, by contrast, recognized that Hispanic South Texans share many of the same values as non-Hispanic white voters elsewhere in Texas and swept in with a pitch about defending gun rights, promoting the oil and gas industry, restricting abortion, and supporting law enforcement. Republicans proved more persuasive.

Well, yes. That’s how it works.

Many of the present-day residents of Starr County claim a lineage back to the time when Mexico was Nueva España and when both banks of the Rio Grande were Mexican territory. While “Tejano” means different things to different people, many use the word to telegraph a specific message: their ancestors are the early Spanish settlers who colonized the province of Tejas for the Spanish Crown. They don’t see themselves as immigrants.

That’s because they’re not immigrants. Treating them as immigrants cancels their ancestors and their heritage. Tejanos have been in Texas for generations, from the time when it was part of the Spanish Empire. Badly misunderstood and under-reported is the fact that Tejanos are and have been part of the culture of Texas long before we Anglos showed up. By the time my ancestors arrived in Texas in the 1850s and 1860s, Tejanos had been building Texas for more than a century. They’re not immigrants in any sense of the word. They’re Texans and American citizens. They resisted elitist dictator Santa Anna, fought at the Alamo and San Jacinto, they’ve served in every major war defending the United States, they’ve won Medals of Honor and have state veterans homes named after them — and their communities are the most directly affected by the chaos that out-of-state Democrats tend to unleash on the border. They serve in the Border Patrol and the Coast Guard, and they work in the oil fields and own thriving businesses. Coyotes, cartels, drugs, and trafficking all affect Tejano communities first, while the rich Democrats who party at the Met are unaffected personally and weaponize the border as a racial cudgel. RGV citizens are not happy about that and they know whom to blame.

Tejanos also tend not to support defunding the police, censorship, lockdowns, or any of the other Democrat policies of recent vintage. They stand for freedom as they have every day since 1836 when they rose up against a bully and helped drive him out of Texas forever.

My friend Aaron Peña is running for office again, in the Republican primary for a seat on the 13th Court of Criminal Appeals. I have no doubt at all that Justice Peña (I like the sound of that) would bring his strong conservative principles to bear. In years past, the real election action in the Valley was always on the Democrat side. Those days are done. The winner of the Republican primary in which he’s running is pretty likely to win the general election. That’s one sign among many of how much things are shifting in South Texas.

And the Democrats, for the most part, still don’t understand any of it.