Snakes on a Plane: Can the Fleeing Texas Democrats Really Face Punishment?

I put a question to several sources in the Texas legislature: Who is paying for the Texas Democrats’ flight of fancy?

So far, no one knows who isn’t supposed to know. The chartered flight, the weak non-Texas beer, the accommodations, the food they’ll consume, the fuel they burned and belched into American skies while they claim to do all for Mother Earth — all of that will have to be reported on campaign finance reports as in-kind contributions. But in accordance with Texas law, those reports won’t come out until January. By then the same Democrats may have run off to Canada or Cuba to protest redistricting.

Another question has been moving through the state: Can the Democrat fleebaggers be punished? Gov. Abbott hit them in the pocketbook by vetoing their staff salaries, and they’re suing him over that.

The Texas Constitution isn’t silent on the matter. Article 3, Section 10 offers the Republican leaders quite a bit of leeway.

Sec. 10. QUORUM; ADJOURNMENTS FROM DAY TO DAY; COMPELLING ATTENDANCE. Two-thirds of each House shall constitute a quorum to do business, but a smaller number may adjourn from day to day, and compel the attendance of absent members, in such manner and under such penalties as each House may provide.

Sec. 11. RULES OF PROCEDURE; PUNISHMENT OR EXPULSION OF MEMBER. Each House may determine the rules of its own proceedings, punish members for disorderly conduct, and, with the consent of two-thirds, expel a member, but not a second time for the same offense.

So, yes, they can be compelled to return and face a punishment of some kind “as each House may provide.” That’s…broad.

Could such a punishment include stripping Democrat committee chairs or vice-chairs of their leadership roles?

Texas is a bit quirky here (some grassroots Republicans might swap in another, higher-octane, adjective). Despite the fact that Republicans control the House and have for a long time, and despite the fact that the Texas Democrats often behave as if they’re the Washington Generals to the Texas Republicans in the role of the Harlem Globetrotters, Democrats have been appointed chairs and vice-chairs to numerous House committees. This is due in part to Speaker Dade Phelan’s seeking and securing Democratic support for his election to speaker of the House. That’s not unique to him. I believe every Texas House speaker who’s been a Republican has made it to that spot with significant if not unanimous Democrat support. That’s just how it works.

I put the question to the state party’s press office (where I used to work a long time ago) whether the new party chairman, Matt Rinaldi, would support punishing wayward Democrats by stripping them of their leadership positions. He was just elected on Sunday by the State Republican Executive Committee so there’s a bit of churn going on there. He didn’t get back to me directly, but I’m probably not the only one who’s asked about this. Tuesday night, Chairman Rinaldi posted this graphic to answer that question. 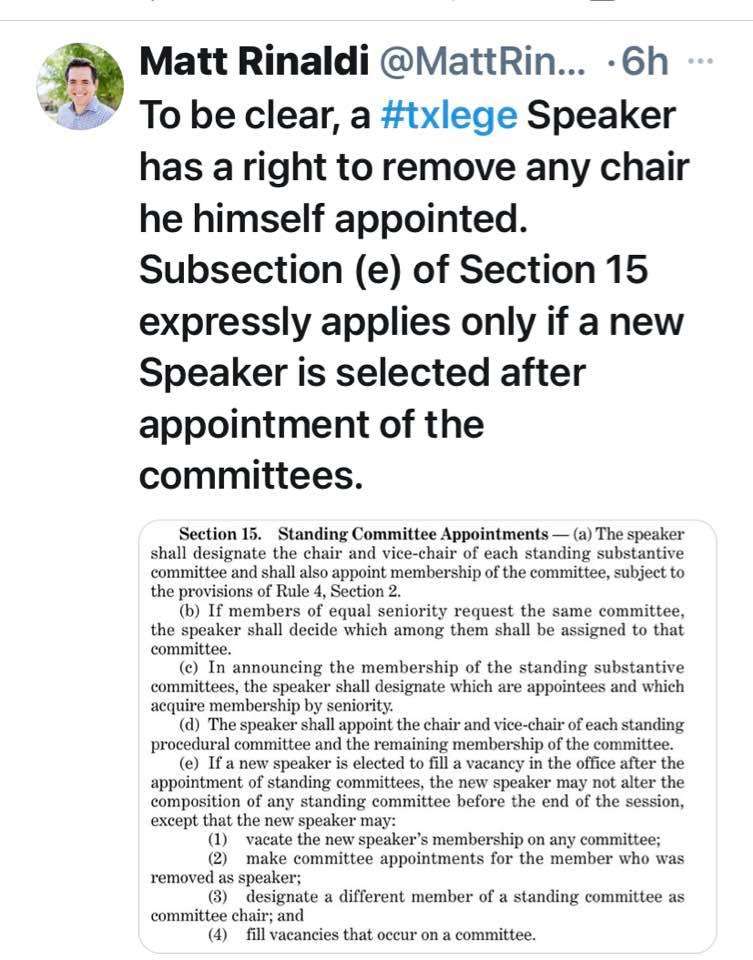 So there you go. That’s not outright support from Chairman Rinaldi but it sure isn’t opposition. And yes, Speaker Phelan has this weapon in his arsenal, along with others “as each House may provide.” Earlier in its history, Texas might have come up with some very creative ideas.

The trick will be compelling the Washington wanderers to come back and do their jobs. The House voted Tuesday to empower the sergeant-at-arms to arrest them. But Texas law enforcement jurisdiction ends at the state line. Does anyone see Biden’s Capitol police taking time away from their January 6 investigation to nab Democrats who are thwarting democracy in Republican Texas, and blocking a law that Biden lies is the closest we’ve come to civil war since the last one?

The threat of losing plumb leadership spots might be a motivator. Speaker Phelan could print names on little cards, put them in a cowboy hat like the one on the Jim’s logo, and start drawing them out with flair and drama on TV, one an hour, and announce that that member has just been stripped of every leadership post he held. “Taps” is played with each name drawn and announced. Or perhaps “De Guello.”

It would be a bold move.

It or something like it might be what’s needed to bring the champagne socialists back to Texas.

Update: I’ve been in politics a long time, but I really don’t know what Democrat state Rep. Gene Wu is trying to say here. Anyone have a clue? Maybe they had something a lot stronger than beer on that chartered plane?

Here @FoxNews. I made this for you.

Wu has turned his breakfast into a two-dimensional version of Community’s Greendale Human Being mascot. That’s…a thing that happened.