Oakland, Calif., is run by Democrats.

Democrats defunded police. (Then some Democrats, such as White House Disinformation Director Jen Psaki, claim Republicans akshully defunded police. That’s a brazen lie told to taxpayers at our own expense.)

The police chief warned the city council that defunding would cause more problems in a city that’s flown past 65 homicides for the year already.

But this criminal moment is really symbolic of our times.

A pair of robbers in Oakland, California, held up a television news crew at gunpoint just hours after the city’s police chief warned of safety concerns following officials’ decision to slash his department’s budget by more than $18 million, police said.

The news crew was filming an interview with the city’s director of violence prevention outside City Hall around 3 p.m. local time Monday when two armed suspects tried to take their camera, the Oakland Police Department said in a statement. A scuffle broke out and a private security guard, contracted by the news agency, pulled out his gun and told the robbers to leave.

Bonus: Good guy with a gun stopped criminals and may have saved lives. The DA will probably look into prosecuting him.

Prediction: Rich leftists who pushed for defunding police will continue to walk around with their armed private security guards. The rest of us mean exactly nothing to them.

They’re not usually so brazen as to try theft of a media crew while it’s interviewing the city violence prevention officer, though.

But here we are. 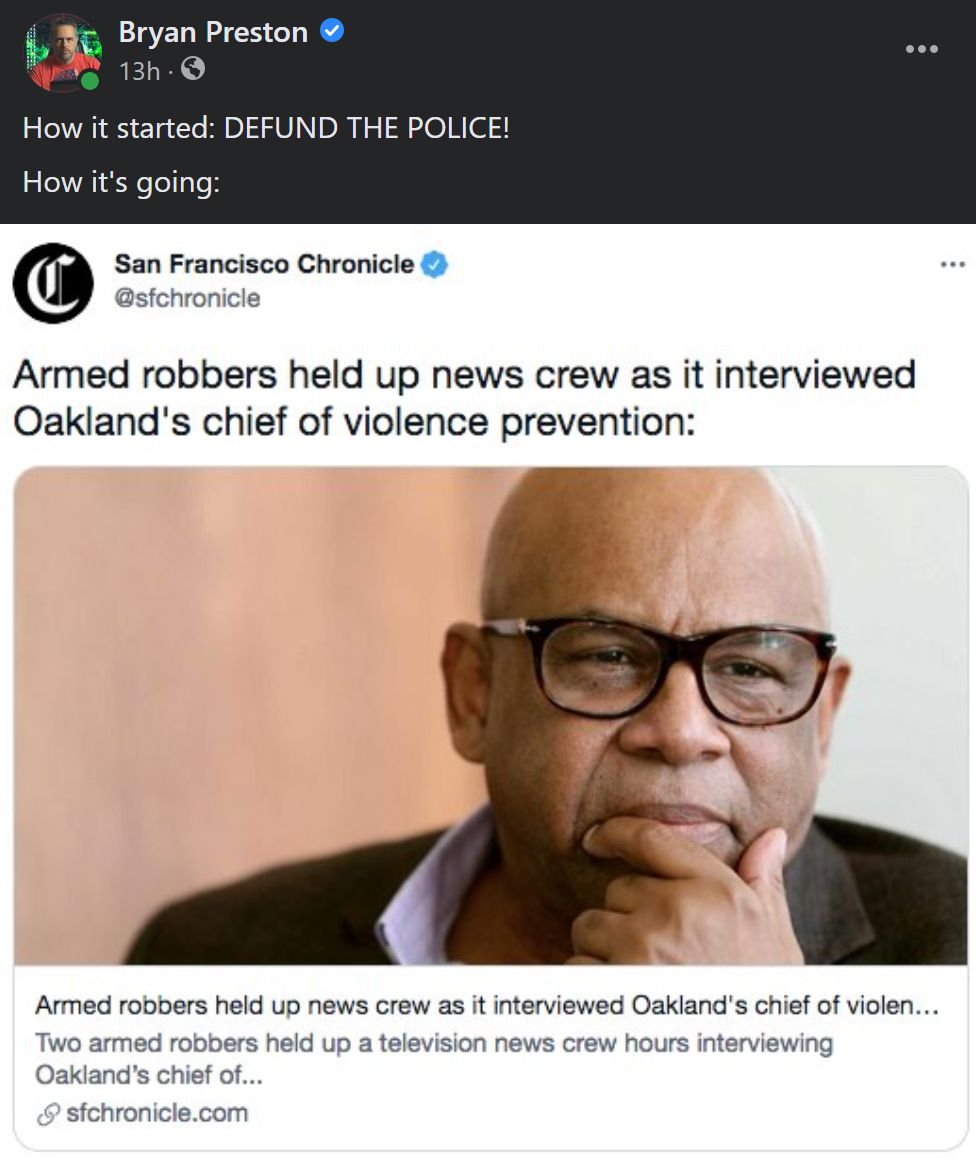 Prediction: This incident won’t slow down the Great Unlearning at all. Latter-day Rome is still very much on fire. We may not have a horse in the Senate, but we have the south end of a north-bound one in the White House.

Related: The Sound Behind You Is Reality Catching Up (and It’s Carrying a Gun)

Bryan Preston is the author of Hubble's Revelations: The Amazing Time Machine and Its Most Important Discoveries. He's a writer, producer, veteran, author, and Texan.
Read more by Bryan Preston
Tags: DEFUND THE POLICE