Austin Protest Shooting Update: Is the Shooter a Veteran?

As Sunday has progressed we have learned that the man who was shot was Garrett Foster, 28.  He was a veteran who served in the United States Air Force.

Foster was one of several protesters who carried rifles to the Austin protest Saturday night.

This is Foster, carrying his AK-47 rifle. In the brief interview, he taunts opponents of the ongoing marches.

Garrett Foster, the Black Lives Matter supporter who was shot and killed tonight in Austin, TX, was interviewed with his AK47.

In the video, you can see the hollowed-out stock of the rifle he was carrying. He recently posted this photo of that or a similar rifle on social media, according to a source who reached out to PJ Media. The source confirms Foster was carrying the AK-47, or one very similar, Saturday night. 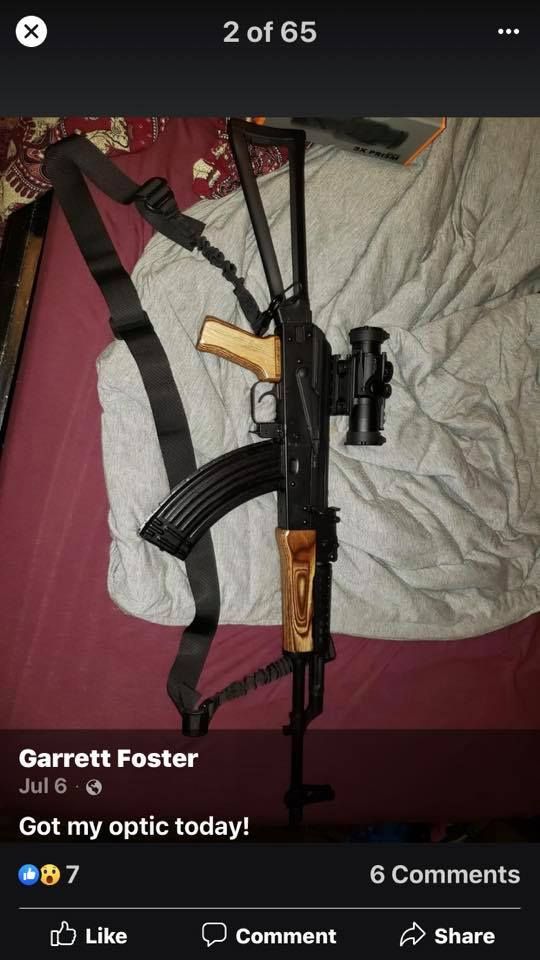 Social media photo posted by Garrett Foster, who was killed in a riot in Austin, Texas July 25, 2020. Photo from social media.

A source familiar with Saturday night’s events tells PJ Media that the crowd was marching through downtown, from the W Hotel to Austin police headquarters.

“There were about 100 people in the crowd, including the guy with the AK, and about four other protesters armed with AR-15-style long guns.”

The source identified Foster as a regular attendee at the protests over the past several weeks, along with his fianceé, Whitney Mitchell. According to the Austin American-Statesman, Mitchell had all four of her limbs amputated several years ago after developing a medical condition that led to sepsis.

The W is a luxury high-end hotel in the heart of Austin. Mayor Steve Adler lives there.

Drivers encountering the marching crowds, which are occupying streets illegally, have few choices: wait for the crowd to go away, try to drive away, or drive through if they can. All of these choices come with considerable risks. Drivers also have to hope that no one in the crowd decides to target or terrorize them, as has happened in Austin and several other cities in recent weeks. This march was happening shortly before 10 p.m. on a Saturday night.

“Whether the guy drove into the crowd voluntarily, or just found himself in the wrong place at the wrong time, my understanding is that he was surrounded by the mob,” the source said. “The deceased approached the car and raised the AK toward the driver, who shot him multiple times in the torso. As soon as the crowd started running away, the driver took the opportunity to escape, and started to drive away down Congress. One of the other armed protesters shot several rounds into the back of his car as he was driving away.”

Video posted on social media from the dashcam of another car confirms that the streets were still open to traffic and that the car in question was surrounded by members of the crowd.

“The driver voluntarily stopped several blocks away and waited for law enforcement to contact him,” the source added. “There is no indication that the shooter was in the area for the protests, or that politics played any role in his decision to shoot the guy. I heard the shooter is an army sergeant who was in the area working as an Uber driver, but I can’t confirm that.”

Our source also described the behavior of the protesting crowd after Foster was shot dead in front of them.

“After seeing one of their own shot and killed right in front of them, it took them less than 10 minutes to return to yelling and screaming at officers. They returned to protesting before the guy was even loaded into the ambulance,” the source said.

A few dozen of the protesters later returned to Austin PD headquarters and resumed chanting, blaming the police for what had happened. Mitchell, Foster’s fianceé, was among them. Some of the crowd remained until about 3 a.m. Sunday.

Chants down at APD HQ as the victim’s fiancé returned to mourn with friends and supporters. pic.twitter.com/9TQCsCssai

Some who have depicted Foster as the victim have played up his veteran status. It appears the individual who shot him, in self-defense as things appear at this time, is a veteran as well. He has been released. Foster appears to have served less than two years in the military and was discharged early to care for Mitchell.

Military members swear an oath to uphold and defend the Constitution against all enemies, foreign and domestic.

Antifa, which is behind most if not all of the violent marches of the past several weeks, despises the U.S. Constitution and wants to destroy our country.

More: Texas’ Castle Doctrine law clearly covers Texans who feel threatened in their homes and in their vehicles.

More: APD Chief Brian Manley delivered a press conference on the shooting Sunday. APD’s understanding is that protesters surrounded the car and began beating on it after it turned south onto Congress Ave. Foster approached the car and, according to the driver, pointed his AK-47 at him. The driver then opened fire on Foster. A second protester fired a handgun as the driver attempted to escape. Both the driver and the other individual who opened fire had valid licenses to carry handguns in Texas.