A Racist Note Hoax In Aggieland?

Texas A&M University has seen its share of protests during the nationwide unrest since the killing of George Floyd in Minneapolis, MN. In June, Aggie quarterback Kellen Mond led protests at the statue of the school’s former president, Lawrence Sullivan “Sully” Ross, demanding that the statue be removed because Ross, who was also a Texas governor and founder of historically black Prairie View A&M University, fought on the Confederate side in the Civil War. The statue was repeatedly vandalized with tags including “BLM” and “ACAB,” the latter meaning “all cops are bastards.”

While those protests were at their height and media glare focused on the university, a 21-year-old A&M senior reported to campus police that someone had placed racist notes on the windshield of his car. 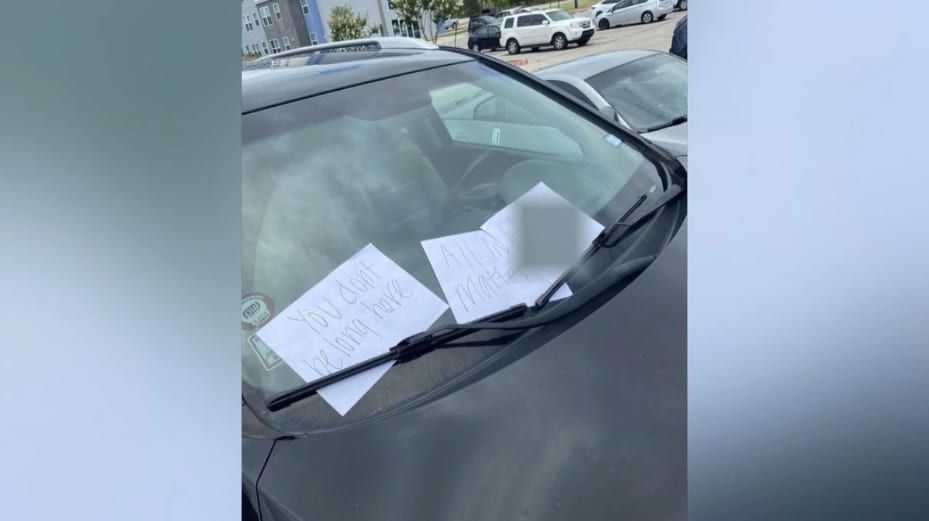 Police say the racist notes were placed by the student who reported them as a crime. Photo by Isaiah Martin.

The university was quick to respond with an investigation and a promise to identify the culprit.

“Yesterday afternoon I learned of a detestable racist event — messages of hate were left on the car windshield of a #TAMU student. Acts of racism are irreconcilable with the values we uphold here at Texas A&M University.” – #PresYoung

Investigators say they have found the perp and ripped off the mask.

COLLEGE STATION, Texas (KBTX) – In a report released to KBTX on Thursday, police at Texas A&M University said a student who reported finding racist notes on his car’s windshield last month may have placed the papers there himself. However, the 21-year-old at the center of the case strongly denies those claims.

Isaih Martin, a senior at A&M, called police on the afternoon of Wednesday, June 24, to report finding three handwritten notes on his car that said “All lives matter” and “You don’t belong here.” The third note contained the N-word.

They got him via video from a security camera at a swimming pool in the area.

According to the police report of the video, no one else was around Martin’s car long enough to place the notes.

Martin has defended himself on social media but he has also announced he’s no longer speaking with police.

“I’m in a predicament where the topic of the case was let’s find out who did this to them pointing the finger at me,” said Martin on Twitter. “In the end, I stopped talking to them because it seemed they were more interested in me getting the blame for this hate crime instead of finding the actual person who did it.”

Police say the notes did not rise to the level of a “hate crime” since they included no threats, Martin himself is the most likely person to have placed them there, and have closed the case.

The University Police Department closed this case after consulting with the Brazos County Attorney’s Office. The police report and related available information affiliated with their work are being released through standard protocols.

The perp who vandalized the Ross statue was captured on surveillance video but has not been identified or apprehended.

Jason Whitlock Outkicks the NFL and Our Hysterical Times