Four of the top Iranian soccer stars have been banned for life from playing after they protested the regime by wearing green wristbands in their match last week.

Four members of the Iranian football team have been ‘retired’ for wearing green arm bands in protest of the election in Iran.

This is amazing (and not in a good way).

The Iranian government has “taken revenge by imposing life bans on players who sported green wristbands in a recent World Cup match in protest against Mahmoud Ahmadinejad’s disputed re-election.”

“According to the pro-government newspaper Iran, four players – Ali Karimi, 31, Mehdi Mahdavikia, 32, Hosein Ka’abi, 24 and Vahid Hashemian, 32 – have been “retired” from the sport after their gesture in last Wednesday’s match against South Korea in Seoul.” 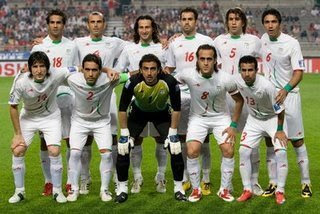 The Iranian national football team played South Korea last week in a must win match. The team wore green wristbands in support of the democracy protesters. (Twitpic)
At halftime the team took off their green wristbands(?)

Hopefully the Iranian atheletes will be spared the same treatment that Iraqi athletes received under Saddam Hussein and his sons, as ESPN reported shortly before Saddam was deposed in 2003 by a joint collation of US and allied forces.

(Curiously, I had to go to the Wayback machine to retrieve this article. I’m sure its URL was simply misplaced during one of ESPN’s innumerable site redesigns…)

Related: Like myself and three quarters of the folks in my Twitter feed, clearly the soccer players in the above photo are Bill Kristol’s useful idiots.