Where should one start to understand the mess Rousseau and Marx started? Paul Johnson? #history #ideology

Editor’s Note: We’re launching some new discussions and debates this winter in dialogue with the new fiction publishing company Liberty Island. See the previous installments: David S. Bernstein on November 19: “5 Leaders of the New Conservative Counter-Culture,”  Dave Swindle on November 25: “7 Reasons Why Thanksgiving Will Be My Last Day on Facebook,” and this collection of discussion starters from yesterday: “60 Questions to Provoke Debates About How to Fix Our Popular Culture.” Today we launch the new, experimental PJ Lifestyle Book Talk, hopefully a regular (aiming for daily…) feature including Instagram videos and tweets discussing the books listed across genres, time periods, and cultures. See Dave Swindle’s open letter to his younger brother — “My Growing List of 65 Read-ALL-Their-Books Authors” — for more description of the method behind the madness of this work-in-progress book collection. The goal: 365 books total, 7 lists of 52 each, organized thematically by day. What books should make it onto the final list? Your input and suggestions are most valued. Please join the discussion on Twitter (@DaveSwindle) and Instagram (@DaveSwindlePJM) and your responses might appear in future installments.

Monday: How can we understand Evil? I explore books about orthodox Islam, revolutionary Marxism, and antisemitism. In particular I’m going to try to explain how they’ve evolved over the centuries.

1.0 – From Marx and his predecessors to the death of Stalin

2.0 – the Cold War Criminal State and its Apologists and Allies

Where does #paganism and #idolatry from? Page 50 of the Worship of the Dead or the origin and nature of #pagan #idolatry by Col. J Garnier, published 1904. #Mystic #occult #religion

Page 50 of The Worship of the Dead or the Origin and Nature of Pagan Idolatry by Col. J Garnier, published 1904.

Tuesday: The 5 Points of the Pagan Star

Tuesday: What is the relationship between ancient paganism and today’s popular culture? I argue that the idols described in the first five books of the Bible have a lot in common with the stars up on the screen today. Here I’ll try to break down the similarities and show how they evolved through the books that persuaded me.

Have you read An Army of Davids? Make a point to. One of my favorites that we need to put into action more in the coming years.

Wednesday: How does technology transform our lives? And by “technology” I don’t just mean computers — writing is a form of technology. One’s diet is a technology. These are practical tools one should master.

Is there really a big philosophical difference between William F Buckley Jr. #conservatism and #AnnCoulter conservatism? I once thought there was but as I've read their books more I'm not so sure… What do you think? #ideology

Thursday: How and why do ideological movements change and evolve over time? The word “conservatism” and the goals of the movement it describes have changed a lot. Here I try to untangle some of the conflicting currents of the ideology and point toward the thinkers within it I most appreciate. My intent is to build on the scheme established here last year.

Polemics and Ideas To Inspire Conservatism 3.0 – “The Next Right”

Due back at the library tomorrow and I still have many chapters from this biography to finish. #Maimonides #jewish #God

"The pinnacle of the religious experience is the joining of love and awe." – Moshe Halbertal, page 199 of #Maimonides Life and Thought. #religion #God #Love #Judaism

Friday: What lessons can we learn from extraordinary lives? I’m trying to pick 52 biographies and memoirs ranging from people in the ancient world through the Middle Ages on through to present day.

The Boomers and Beyond

Another book on my mind lately, recommend by a friend. #Leadership #military

“If I could repurpose my team from killing people to poultry farming and fish farming overnight, you can certainly adapt your work force to an ever-changing marketplace.” – Lt. Gen (Ret) Rick Lynch, page 193 of Adapt or Die: Leadership Principles From an American General.

"If I could repurpose my team from killing people to poultry farming and fish farming overnight, you can certainly adapt your work force to an ever-changing marketplace." – Lt. Gen (Ret) Rick Lynch, page 193 of Adapt or Die: #Leadership Principles From an #American General. #military

"The vowel is the breath, bestower of life." – page 26 of Robert M. Hoffstein's A #Mystical Key to the English Language. #religion #God #esoteric #occult

“The vowel is the breath, bestower of life.” – page 26 of Robert M. Hoffstein’s A Mystical Key to the English Language.

Sunday: How did Judeo-Christian values emerge from the chaos of ancient paganism and what effect did they have on humanity? We explore books about the history of Western Civilization, Judaism, Christianity, and the religions’ mystical practices.

Remember: This is work-in-progress, incomplete list that needs your suggestions for authors and subjects to expand! 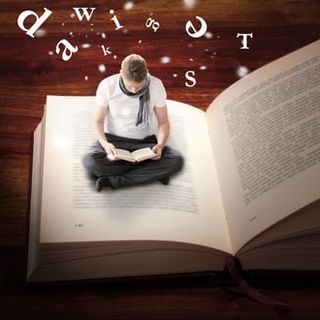