A recent article on Yahoo extolled “The Benefits of Marrying Later in Life.” The writer, who waited until age 46 to marry, listed the benefits of delaying marriage:

With all due respect to the author, her list looks like a recipe for perpetual singleness. A decade or more of doing what’s best for “me” and learning to love and complete “myself” is not the best way to prepare for the sacrifices and selflessness required to be one half of a couple. Be honest: Would you want to marry someone who has spent two entire decades of her life “learning to love herself”? She’s going to be a tough act to follow.

According to the Pew Research Center, the median age for marriage in the United States has risen to a record 28.7 for men and 26.5 for women, which means that half are older than the median when they marry. Marriage overall has declined as well; barely half of Americans are currently married, a record low, compared to 72% in 1960. 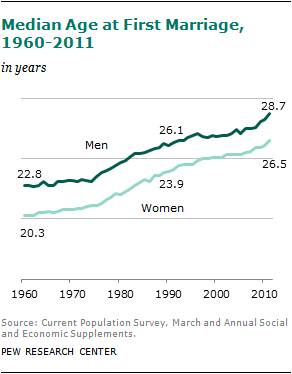 But those averages don’t tell the whole story. More and more in our society, success is defined as progressing along a pathway that includes high school, college, graduate or professional school, a career with a 6-figure salary, and, after a long succession of “practice” relationships, perhaps marriage and children (if the woman’s AARP-eligible eggs hold out that long).

Of course, it hasn’t always been that way. Until the early 1900s, no one had ever heard the words “teenager” and “adolescence.” Upon reaching the age of maturity (usually in the late teens), young people were expected to court and marry in short order. If a 20-something lived in his parents’ basement, he usually had a good excuse — such as missing hands and feet, or being in a permanent comatose state. In the book From Front Porch to Back Seat: Courtship in Twentieth-Century America, Beth Bailey describes the societal changes that led to our current dating and marriage culture and the new phase of life we now know as extended adolescence:

Because young people were released, to a great extent, from adult responsibilities and decisions, the act of choosing a lifelong mate did not seem so immediately important. Within youth culture, the emphasis in courtship shifted to the social and recreational process of dating…

In a span of about 50 years, we went from supervised courtship with the expectation that marriage would be the end result to casual, recreational dating and, eventually, cohabitation as an accepted precursor or replacement for marriage. As a result of these cultural changes, not only has the marriage age crept steadily upward, but so has the divorce rate. Currently, around 50% of new marriages end in divorce, compared to 8% in 1900 and 25% in the early ’70s, when no-fault divorce laws appeared.

In light of these statistics, I’d like to suggest four compelling reasons why marrying earlier in life (perhaps by the mid-20s) might be beneficial.

In his book I Kissed Dating Goodbye, Joshua Harris recounts a young woman’s dream about her wedding day. As she meets her groom at the altar, other young women begin to line up behind her future husband. They are both devastated as they realize that he will be bringing his (rather large) entourage of ex-girlfriends into their marriage. Harris goes on to explain that the dream was a metaphor for his dating experience.

He realized that he had given each girl a piece of his heart and had taken pieces of theirs. Each successive relationship left him with a little less to give to his future wife. It’s like when you stick two pieces of masking tape together and pull them apart. If you continue to repeat the process over and over again, eventually no stickiness remains. There would always be memories, thoughts, and images that were shared in previous relationships that would influence, and to some extent shape, the future marriage. Memories from past relationships can linger for dozens of years and threaten the foundations of even the most stable marriages. According to a survey at Your Tango, thinking about exes is a serious problem:

In simple risk-assessment terms, the less baggage and the fewer corpses of past relationships you drag into your marriage, the stronger the foundation will be.

3. You can enjoy the journey of growing together

Regardless of your age at the time of your marriage, you can count on both partners changing over the course of the relationship. Those who marry younger grow together rather than independently. My husband and I are approaching the 25-mile marker in our marriage and we are not the same people we married those many years ago. I was working at a job I hated and my husband was going to school and working at an oil change shop while serving in the National Guard. We lived frugally in a 3-room rental in a sketchy neighborhood in W. Akron. A  few years later we bought our first house in a neighborhood on the outskirts of inner-city Akron for $38,000. Gary spent his weekends keeping our cars running and I learned how to make 101 recipes using ground chuck, which was $0.89/lb back then. If we had waited until our 30s or 40s to marry, we’d have missed those precious years of working together toward our goals and watching the lovely, slow progress that emerges over the years of living life as a team and arriving at the destination together. I wouldn’t trade those years of joy and struggles for anything. King Solomon, a man of extraordinary wisdom, had this to say: ”

Two are better than one, because they have a good reward for their toil. For if they fall, one will lift up his fellow. But woe to him who is alone when he falls and has not another to lift him up! (Ecclesiastes 4:9-10 ESV)

I suppose there are benefits to waiting until you have everything figured out and you have achieved success in your career before you “settle down,” but what a grand adventure you are missing along the way with the love of your life!

2. Sex and babies are for the young

Our sexual desires and ability to procreate are innate, God-given characteristics. Those are precious, beautiful things and, as a Christian, I believe the Bible teaches they are reserved for the confines of marriages (read Steven Crowder’s excellent account of the rewards of abstinence before marriage). This is the best plan for a healthy, happy marriage. Expecting men and women with this sexual ethic to suppress those feelings until they are 30 or even 40 is frustrating, difficult, and, probably for many, cruel and unusual punishment. Marrying earlier rather than later avoids the frustration of denying and repressing one’s natural sexual urges and allows them to be expressed appropriately in the context of marriage. In addition, the 20s are the peak fertility years, especially for women. Marrying earlier can help avoid the heartache of infertility that so many couples face when they postpone childbearing until they complete their education and then spend a dozen years establishing their careers. It’s counterintuitive to delay having children until after the woman’s best chances for conception have passed. There is also the added benefit of not being the dad who asks for the senior discount at the ice cream stand after his kid’s t-ball game. And think about the weirdness of picking up both Children’s Tylenol and your Low-T medicine at the pharmacy.

For many couples, living together before marriage is a cover for their unwillingness to make a mature, adult commitment. I’ll first refer back to my previous point about God’s plan for sexual abstinence before marriage and monogamy within as the best route to a happy and healthy marriage. But in addition to that, I believe that cohabitation sets a very unhealthy pattern that leads to a culture of divorce. Living together before marriage to “see if we’re compatible” is practicing failure. The unspoken (or sometimes spoken) agreement is that if it doesn’t work out or if my partner doesn’t fulfill my desires, we can both walk away. It’s built on a foundation of selfishness and flies in the face of “For better or worse, for richer for poorer, in sickness and health, forsaking all others, until death parts us.” Marriage is fun, fulfilling, and amazing, but it’s also really, really hard sometimes. There can be long periods of time when couples must wade through difficult periods of medical issues, family crises, financial problems, and routine boredom. Cohabitation gives couples license to walk away in the face of those difficulties, with the excuse that “they must not be compatible” or it “ wasn’t meant to be.” In contrast, marriage (technically) requires a commitment to permanence. Couples that survive and endure through dozens of years of marriage do so not because their marriages aren’t touched by trials, tragedies, and heartache, but because they manage to navigate these difficulties and persevere, fiercely resolute in the commitment they have made to one another and, for many, to God.

In his counter-cultural book Dating with Integrity, John Holzmann describes the solemnity of the vows, beginning at the moment of engagement:

To be betrothed means to be promised. People used to speak of “plighting” (pledging, promising) one’s “troth.” Troth means faithfulness, loyalty, promise. But whether we call it engagement or betrothal, the main thing people need to attend to is that their promises are true and they will do whatever they must in order to fulfill them. At the point of engagement or betrothal the great transition should occur. It is here that one should make one’s vows and plan to keep them. Before one makes a vow, all one’s questions should be answered concerning whether or not he or she intends to fulfill it. It is at the point of engagement that the big shift should occur between being “mere” friends to being committed to one another as husband and wife for the rest of our lives.

Couples in trial marriages via cohabitation arrangements refuse to make such commitments and instead enter into agreements that are, at their root, open-ended and even selfish. Experiencing one or more of these relationships/arrangements teaches couples to take the easy way out when the going gets rough. Rather than making semi-sincere vows (which, by the way, can also be made or implied in non-cohabitating serious relationships), perhaps we need a return to what our grandparents practiced: Avoiding the “practice marriage” trap by marrying young,  embracing the gravity and solemnity of the marriage commitment, waiting until the wedding day to move in together, and staying together for life.

There are many factors to consider when deciding when and whom to marry: the maturity of the individuals, their financial independence, whether they have a realistic view of marriage, and, of course, whether they’ve found the right person to marry. The bottom line is that what we’ve been doing for the last fifty years isn’t really working. It doesn’t take a rocket scientist to figure out that the way we do marriage is failing miserably, evidenced by the colossal divorce rate. It’s time to examine our modern marriage paradigms and ask if we can learn a thing or two from generations past. While I’m not suggesting that early marriage is right for everyone, I am saying that we shouldn’t automatically dismiss it out of hand just because current conventional wisdom says it’s a bad idea and the “experts” tell us that we need to spend a decade or more of our adulthood “finding ourselves” and learning  to love ourselves more.

Related at PJ Lifestyle on marriage: