Dinesh D’Souza is mainly known for his books and documentaries. His most recent documentary is 2000 Mules, which conservative film critic Christian Toto said “may be the most convincing, and explosive, evidence the 2020 Presidential election wasn’t as fair as we’ve been told.”

Now, D’Souza and his wife Debbie have written a children’s picture book, Freedom Day the Asher Way, to warn kids away from socialism and promote a free market economy. 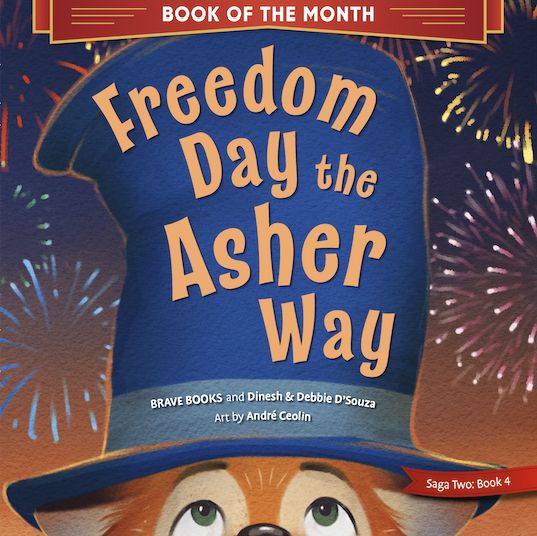 For Freedom Day the Asher Way, the D’Souzas partnered with BRAVE Books. This conservative publishing house recently launched a series of children’s books to counter the onslaught of woke plaguing our schools and corrupting the nation’s youth. For example, Rep. Dan Crenshaw has written a book about cancel culture, and Dana Loesch has a book that explains the fallacy of gun control. The first book launched by BRAVE Books was Elephants Are Not Birds by Ashley St. Clair, which tackles the issue of gender identity.

“I was a school teacher and know the importance of teaching children values through a story book,” Debbie D’Souza told PJ Media.

Related: What Can You Do to Counter the Wave of Woke Books in Our Schools?

The radical left clearly knows this, too, as they’ve been pushing their woke agenda in schools, necessitating the efforts of BRAVE Books and other conservative publishers to restore balance and counter the propaganda being taught to kids.

“I think it’s important for conservatives to create an alternative culture to the debased, perverted culture of the Left,” Dinesh posits. “This means making our own movies, creating our own educational platforms, and yes, writing children’s books.”

Freedom Day the Asher Way follows a hero named Asher, who is determined to create the best Freedom Day ever — even though he’s running low on funds. When Asher chooses to tweak the market to make everything cheaper, he runs into some huge problems. Asher learns the hard way that the free market is better for buyers and sellers.

“The story was loosely drawn from my book United States of Socialism,” Dinesh says. “Of course, it’s a long way from a densely-argued 300-page book aimed at adults to a children’s book. BRAVE Books helped us to make the ‘conversion.'”

The story follows a larger storyline of a compilation of stories from Brave Books. “Socialism was a subject that needed to be taught,” explains Debbie, who was born in Caracas, Venezuela, and came to the United States after Venezuela became a socialist country.

The book targets children ages 4 to 12, which the D’Souzas believe is the right time to warn kids about the dangers of socialism.

“Children learn concepts about human nature at different stages of development, but between the ages of 5-7, they learn how to share, and most can tell you the difference between right and wrong, so it’s the perfect age to introduce the concept even if they won’t fully understand it,” says Debbie.

“Obviously, children don’t encounter ‘socialism’ in an ideological sense. But they do learn, at a young age, basic concepts of fairness and justice,” says Dinesh. “Socialism travels under the banner of justice—specifically social justice. So our book deals with elementary ideas like what’s fair and why the socialist concept of ‘price fixing’ doesn’t work.”

BRAVE Books releases its titles in a subscription format so that families receive a new picture book on a different political topic every month for $14.99/month. Freedom Day the Asher Way is currently the BRAVE Books book of the month.

Matt Margolis is the author of Airborne: How The Liberal Media Weaponized The Coronavirus Against Donald Trump, and the bestselling book The Worst President in History: The Legacy of Barack Obama, and The Scandalous Presidency of Barack Obama. You can follow Matt on GETTR, Truth Social, Twitter, Facebook, MeWe, Gab, and Rumble. News tips, praise, hate mail, and media inquiries can be sent to [email protected].
Read more by Matt Margolis
Tags: CONSERVATISM PUBLISHING