The Good Place was a funny NBC sitcom about a very strange version of the afterlife that you probably wouldn’t like if you have strong opinions about what happens after we die. For everybody else, it was a scream. And one of the people who made it so funny was a writer/producer named Meghan Amram. If you liked all the awful, punny names of the stores and restaurants in “The Good Place” — Knish from a Rose, Sushi and the Banshees, etc. — those were hers. She also wrote some of the more memorable episodes, like fan-favorite “Jeremy Bearimy,” which contains the silliest explanation of the time-space continuum ever committed to film.

Amram also tweets a lot, which probably seemed like a good idea at the time. But then, inevitably, this happened:

Also, today is the day people are reminded YOU'RE A RACIST! pic.twitter.com/eyo8KUi7tY 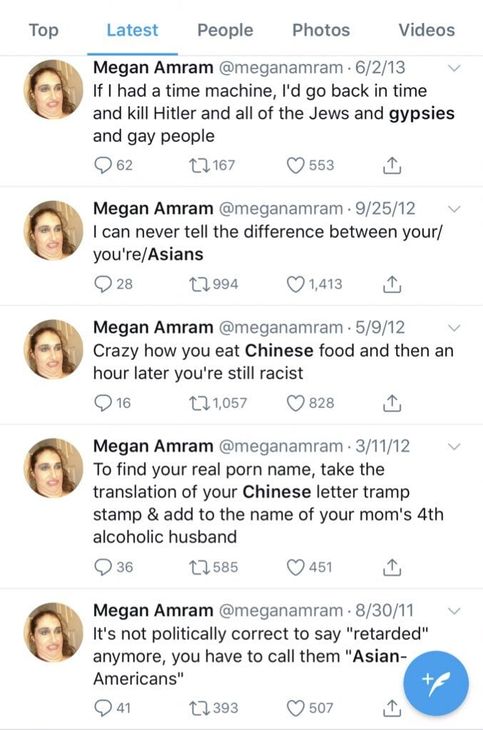 Uh-oh. Looks like somebody’s got some bad tweets in her closet, and some complete rando dug ’em out to humiliate her and get her canceled.

So you know what that means: Time to grovel! Jordan Moreau, Variety:

Megan Amram, a producer and co-writer on NBC’s “The Good Place,” has apologized for posting offensive tweets several years ago that have resurfaced.

“I would like to address some tweets from over the past decade that have been circulating recently… My instinct is to share the varying degrees of explanation for every tweet that has offended, but I know full well there are no excuses. I will be sorry for as long as I live that I have hurt even one person, and I very much understand why my words have hurt many more. Also, I specifically would like to apologize to the Asian American community, who I have hurt most with my tweets. I very much understand why you are hurt,” she wrote.

Here’s the whole abject mea culpa. Please don’t read it less than half an hour after eating:

To everyone that follows me, please read: pic.twitter.com/0Qne8M1wwN

I don’t know about you, but I haven’t cringed this hard since Joe Scarborough started making music videos.

That’s right: A professional comedy writer just apologized for making jokes. It doesn’t matter who thought those jokes were funny. Somebody, somewhere, didn’t. And that’s all it takes because it’s 2020.

If this whole thing sounds familiar, that’s because it keeps happening with increasing frequency. Cancel culture has run amok. Just last week, The Flash actor Hartley Sawyer was fired for bad tweets he sent long before he got a regular TV gig. He begged for forgiveness, of course, but there can be no redemption for crimes against wokeness. Sawyer is damned forever. His friends and colleagues threw him to the angry mob to save themselves, all the while congratulating themselves on their enlightenment.

Hell, some woman you’ve never heard of was just the subject of a WaPo expose for wearing a supposedly racist Halloween costume two years ago. Now she’s fired from her job. Why? Why not? It’s 2020.

We’ll see if the same thing happens to Amram. Her woke bona fides are strong, and her apology is suitably pathetic, so maybe she’ll still have a career after this. Roseanne Barr is still canceled, but James Gunn and Kevin Hart aren’t. As long as Amram didn’t offend anybody important, and none of her colleagues are emotionally blackmailed into condemning her, she might still squeak through this.

Anybody who succeeds in life must be brought down a peg. And in 2020, nobody has anything better to do anyway. Given the choice between getting celebrities canceled or burning down the nearest AutoZone, I suppose this is relatively harmless.

This kind of thing will keep happening as long as people keep capitulating to it. Go ahead, I guess. At least it’s not boring.