An Artist Trekkie's Guide for Becoming a Better Person

I am an artist and a Trekkie. For me creating art, discussing art and seeing art are important ways for me to disconnect with the negative things in life. They are a distraction from mediocrity. Star Trek accomplishes this goal too at times. Both can act as lenses through which I view the world.

Having just finished up graduate school, another huge catalytic chapter of my life, I think it’s time to take inventory of the human elements and roadblocks I encountered and the parts of myself I need to rehab and examine. I’m finding the types of people I work best with, the ones I find the most interesting, also in turn share basic moralistic virtues. They are kind, thoughtful, candid yet respectful, honest, reliable, practically critical and have great taste in music. On a very basic, Prime Directive level, Star Trek also tackles these virtues in its characters but it’s a little too utopian sometimes isn’t it? Because reality contradicts this naiveté of so many people being good or at the very least aspiring to be better.

I started a personal quest in grad school about the time I witnessed my first adult temper tantrum in academia. I won’t go into details but it was shocking to say the least. Right then and there, I suspected, if I actively pursued trying to be a better person, maybe those around me would start being better people too, or maybe we’d attract each other with some type of space age “good person” pheromone. Here’s what I’ve learned so far and it’s not quite science fiction.

Stop seeing people doing something better than you as a threat. Someone is making better art than me (whatever that means). I like to think that we have a choice when it comes to this discovery. You can choose to see that person as an asset, someone to learn from and even collaborate with to make something bigger and better than you both individually, or you can see them as a threat, envy them and even try to sabotage their hard work and success. There’s no in-between so stop fooling yourself into thinking faking happiness is the correct moral compromise.

“And when the two hearts began to beat together, they filled the heavens with a terrible sound. For the first time, the gods knew fear. They tried to flee, but it was too late. The Klingon hearts destroyed the gods who created them and turned the heavens to ashes. To this very day, no one can oppose the beating of two Klingon hearts.” – the Klingon Marriage Ritual

Stop demanding that we accept your misconduct as unpreventable occurrences. Throwing adult temper tantrums and having an aversion to the truth are not things you were born with. We shouldn’t have to tolerate douchebaggery.

Stop accepting bad behavior. I’m tired of walking into situations, be it at work or as an artist and someone explains away the boss’s bad behavior and temper tantrums as being “just the way he/she is”. No, that’s not the way he/she is. That’s the way they want to be and we’re all enabling it by circumventing the confrontation. I was in a show recently where one of the members on the committee planning the show had an emotionally unprofessional outburst on social media. She was wrong in her outburst and instead of getting valid facts before yelling at everyone she decided to trash talk an artist in the show (it was me) in a message she hadn’t noticed I was invited to. When I confronted her, she apologized but in the “I’m not really apologizing because I’m rationalizing bad behavior” kind of way. The Vulcan in me says:

Stop being afraid of Social Media. Millennial this, Boomer that. We all use it so enough of this faux-hipster “I don’t even have a cell phone” crackpottery. Use it wisely and change the content. Trash clogs the digital arteries of social media and the internet in general. Try replacing some of the trash with meaningful dialog. Read everything and share both sides. Consider where things are coming from and stay informed. Now that we have these tools make even a little attempt to use it to your advantage.

There is no such thing as being early. Only late. So stop being an unreliable flake. Have some integrity. It doesn’t matter if it’s your boss, girlfriend or best friend, if you’re supposed to be somewhere make the time and effort to perform according to your word. It is not honorable to show up late for the battle.

When you mess up, apologize without rationalizing. “Sorry I freaked out and threw a temper tantrum on social media before I knew any facts, especially since I turned out to be quite wrong and destructive but I’m really stressed out right now and have to focus on breathing and thinking at the same time.” That is not an apology, that’s a run-on sentence from a person who lacks personal responsibility. Stop rationalizing your bad behavior. If you’re at fault and regret the outcome of your actions you are by definition, sorry. So just apologize and invest your energy in finding a solution and consuming the profit of that experience like a Ferengi.

More lessons to come as I learn them… 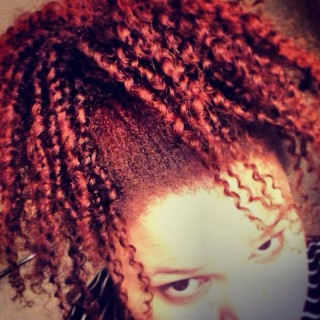 April Bey is an interdisciplinary troublemaker, a contemporary visual artist. She is based in Los Angeles and began her work as an artist living and growing up in the Caribbean. Her current work is an introspective and social critique of American popular culture and internet culture. Racial ambiguity, self identity issues and non-traditional racism are also themes seen in her work. She received her BFA in drawing in 2009 from Ball State University in Muncie, Indiana and recently obtained her MFA in painting from California State University, Northridge. See her work here, support her work here.
Read more by April Bey