Was 'Seinfeld' a Prophet?

I am old enough to remember when Pride was a parade. Activists lobbying for marriage equality organized the day-long events in cities around the nation. I attended out of curiosity and a “live and let live” approach to marriage equality as a young adult, and I was sometimes shocked by the flamboyance and blatant sexualized behavior at the events. Gradually the parades turned into festivals that went on for a weekend or a week. You may have thought once the Obergefell decision legalized marriage equality nationwide, the Pride parades would go the way of the civil rights marches of the 1960s. You would be wrong.

Now we have Pride Month. It requires that every corporate logo must change to display a modified rainbow flag that keeps adding colors for new “oppressed” groups. Sports teams, entertainment companies, singers, news outlets, and society in general must celebrate the month by engaging with events, content, and symbolism to applaud a movement increasingly made up of an authoritarian fringe. They function as the clerisy of a secular religion that offers no means for redemption.

The first week of Pride Month made me recall a scene from the show Seinfeld. Kramer participates in an AIDS walk in one episode but declines to wear a red ribbon. A mob descends on him to demand compliance with wearing the appropriate symbol. “This is America! I don’t have to wear anything I don’t want to wear!” yells Kramer. The crowd physically attacks him.

It is only June 7, but you will be made to conform should you dare to commit the heresy of not celebrating Pride Month. It is not enough to mind your own business and adopt the live-and-let-live attitude that allows us to dwell together in a large, diverse nation. It is certainly not okay to question why we need an entire month dedicated to lauding where some Americans like to put their genitals or the increasingly absurd number of pronouns that now includes words like “cake.”

The LGBTQ+ acronym seems to add letters almost weekly to include gender-bending weirdness and sexual proclivities most Americans don’t understand, let alone endorse. And Gaia demands you applaud and celebrate while a 23-year-old named Jaxen describes themselves as a “polyamorous pansexual demiflux person my stagnant gender being male while my fluctuating one is mostly Agender with occasional female. Pronouns are he/him/they/them/ze/zir.”

You got all that, right? You can’t just nod and smile nervously like Nick Sandmann when a Native American was pounding a drum in his face. You must affirm Jaxen’s bravery, and acknowledge his struggle. Silence is violence in the Church of Woke if your beliefs contradict its catechism. They revel in making you apologize in what can only be likened to a Maoist struggle session performed in public, after which they grant no forgiveness.

It is still possible a mob will chase you out of an alley like Kramer, only now it will be masked far-left activists falling under the loose umbrella of Antifa giving chase. Several people protesting the “Drag Your Kid to Pride” event at the Mr. Misster gay bar in Dallas found this out over the weekend. Drag queens were dancing for children as young as toddlers inside a bar complete with a pink sign behind the stage that read, “It won’t lick itself.” The people protesting the event were the problem.

If the secular religious zealots can’t catch you in person, there are also online mobs. Five Tampa Bay Rays players are finding that out. Mainstream outlets like ESPN and CNN followed the lead of radical left-wing Twitter, calling the players out for not wearing the rainbow (plus other colors that stand for something) team logo during the Rays’ Pride Night celebration. Several cited their Christian beliefs, which earned them more derision. To be on the “right side of history” requires abandoning those archaic beliefs. Even the U.S. embassy in Vatican City flew a gay pride flag. Of course, our diplomats’ courage failed them, and there was no rainbow flag in Riyadh.

Even if you try to do everything right to avoid an assault on your character or company, you risk not going far enough. Here is Amazon’s ever-present reminder about the religious observance of Pride Month: 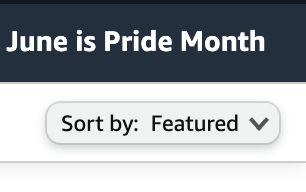 Yet, despite holding a company-sponsored Pride flag-raising event, offering “Glamazon” employee t-shirts, and posting the obligatory reminder, Amazon fell short. About 30 employees held a “die-in” during the company Pride Month event to protest Amazon’s sale of “transphobic” books. Less than 30 employees accused Amazon of attempting to “rainbow-wash” its image and claimed books that don’t affirm trans identity harm trans individuals. Amazon has 1.1 million employees, according to its 2022 filing. But less than three dozen having a tantrum is news during Pride Month.

Radical activists will spend the rest of June persecuting people, businesses, and other organizations who refuse to comply with their religious observance. In 2016, radio host and author Erick Erickson warned in the title of his book that You Will Be Made to Care. At the time, Mark Levin called activists “compassionate bullies of the Left.”

Now, we live in a nation where a vocal, authoritarian minority insists on far more than your silence as they trample every norm and institution. In less than a decade, the silence they demanded through political correctness has become a demand for applause and conformity with their radical secular rituals. When will America say enough is enough?