Before Parents Vaccinate Their Children, They Need This Question Answered

The FDA’s Vaccines and Related Biological Products Advisory Committee (VRBPAC) will discuss Pfizer’s request to vaccinate children aged five to eleven against COVID-19 on October 26, 2021. VRBAC will evaluate clinical trial data, epidemiological data, other information and provide recommendations to the FDA. If you have a child in this age group, you may want to view the discussion between the committee members after their formal presentations. The meeting will stream live on several channels on video platforms like YouTube.

In addition to listening to the discussion, you should demand answers to another question. It deals with the original antigenic sin (OAS) phenomenon and describes how the immune system deals with viruses to produce similar antibodies. Viruses that have related responses are called antigenically similar.

According to the Journal of Immunology:

The term “original antigenic sin” (OAS) was first used in the 1960s to describe how one’s first exposure to influenza virus shapes the outcome of subsequent exposures to antigenically related strains. In the decades that have passed, OAS-like responses have been shown to play an integral role in both protection from and susceptibility to infections. OAS may also have an important deterministic role in the differential efficacy of influenza vaccine responses observed for various age cohorts across seasons. In this article, we review how the understanding of OAS has progressed from its initial description and highlight important outstanding questions in need of further study.

New information from the United Kingdom indicates that COVID-19 vaccines may limit the immune response in the event of future mutations of SARS-CoV-2.

The current vaccines create an immune response against the spike protein of the virus. These proteins are the golf-tee-shaped protrusions from the virus and bind to specific receptors on human cells. The virus uses that connection in a lock-and-key fashion to enter your body’s cells and use them to manufacture more of itself. As the number of these viral photocopies increase, you may feel fatigued, get a fever, and lose your sense of taste and smell. As the disease progresses, some people experience severe respiratory symptoms and clotting.

Related: Will the Biden Administration Vaccinate Kids Without Parental Consent?

Disabling the spike’s ability to unlock your cells by training your body in advance to defend against it seems reasonable. However, the spike protein on the virus is experiencing most of the mutations. A virus has two goals: to make copies of itself and to transmit to new hosts. So if your body presents an antibody barrier between the spike’s key and your cell’s lock, it will essentially make a new key. That process is referred to as antigenic drift and occurs within strains of the virus, as you can see in NextStrain’s tracking. 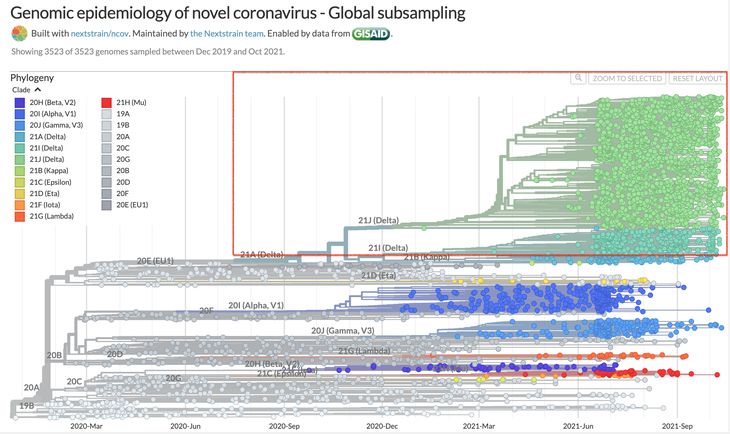 The dots in the box are all the identified versions of the Delta variant. The virus is trying to make new keys.

Researchers observed reactive immunity to SARS-CoV-2 in COVID-19 naive subjects in several early studies of COVID-19. Some researchers hypothesized this could be due to a recent infection with a beta coronavirus in these individuals. Researchers based this hypothesis on how the immune system response to viruses in naturally infected individuals. When your immune system encounters a virus for the first time, it responds to the whole virus. It will make antibodies against it and create memory cells that recognize and fight the ball of a coronavirus, also called the nucleocapsid, and the spike. Research from Emory University concluded that this happens in SARS-Cov-2 infections as well. The researchers referred to the immunity as “wide-ranging,”

Their findings also supported the hypothesis of the earlier researchers about preexisting reactive immunity:

[Dr. Rafi] Ahmed says investigators were surprised to see that convalescent participants also displayed increased immunity against common human coronaviruses as well as SARS-CoV-1, a close relative of the current coronavirus. The study suggests that patients who survived COVID-19 are likely to also possess protective immunity even against some SARS-CoV-2 variants.

SARS-CoV-2 has four main structural proteins: nucleocapsid (N), spike (S), membrane (M), and envelope (E). Emory’s findings indicate that naturally recovered COVID-19 patients develop an immune response to them all. Unfortunately, a throw-away line in the U.K.’s COVID-19 Vaccine Surveillance Report for Week 42 raises a red flag about OAS and COVID-19 vaccines in an environment where SARS-CoV-2 demonstrates antigenic drift and new variants may emerge. Vaccines only encourage an immune response to the S protein.

The U.K. measures population seropositivity. These studies determine how many people test positive for COVID-19 antibodies. When reviewing the results of these studies, the report says this (emphasis mine):

Seropositivity estimates for S antibody in blood donors are likely to be higher than would be expected in the general population and this probably reflects the fact that donors are more likely to be vaccinated. Seropositivity estimates for N antibody will underestimate the proportion of the population previously infected due to (i) blood donors are potentially less likely to be exposed to natural infection than age matched individuals in the general population (ii) waning of the N antibody response over time and (iii) recent observations from UK Health Security Agency (UKHSA) surveillance data that N antibody levels appear to be lower in individuals who acquire infection following 2 doses of vaccination.

First, Emory’s study does not indicate that N antibodies wane any faster than other types. Antibodies are just one element of the immune system. T and B cell development is indicative of long-term immune responses. These memory immune responses may mitigate rather than prevent symptoms but will undoubtedly reduce the virulence of SARS-Cov-2.

Second, the fact that antibodies to the N protein are lower in vaccinated individuals who test positive for COVID-19 signals that vaccines create OAS in individuals who receive them. Thus, a vaccinated individual’s immune system may be biased toward creating antibodies against the S protein as the vaccine trained their immune system to do on their “first” exposure. However, current studies show this is the protein demonstrating the most antigenic drift, so that bias may become less effective in fighting illness.

Until the CDC and FDA understand the observations about the potential OAS in vaccinated people from the U.K. more fully, there is an argument against vaccinating children at exceptionally low risk for severe illness or death from COVID-19. Instead, allowing them to develop layered immunity naturally to all four proteins over several natural exposures may result in better protection from current and future SARS-CoV-2 strains.

We also have no idea what the seroprevalence in children is today. It may well be higher than the CDC disease burden estimate of 22,013,981 cases from 0-17, according to data as of October 18, because of the number of asymptomatic or mild cases in that population. The total population under 18 is approximately 73 million.

Only a demented society would expose its children to the risks associated with vaccines for a disease the vast majority of them handle with no severe issues. America needs to decide now whether we have reached that level of mass hysteria. All of my children are older than 18. If I had children n that age group, they would get vaccinated over my dead body.