The COVID-19 pandemic has given the corporate media an unparalleled opportunity to show Americans that they are little more than partisan activists. The daily Coronavirus Task Force briefings were a stunning display of the media’s childish and partisan behavior. They appeared neither serious nor smart, and American’s trust in the press continued to tumble. In Airborne, author Matt Margolis details some of their most egregious distortions, misfires, and outright lies during the pandemic. 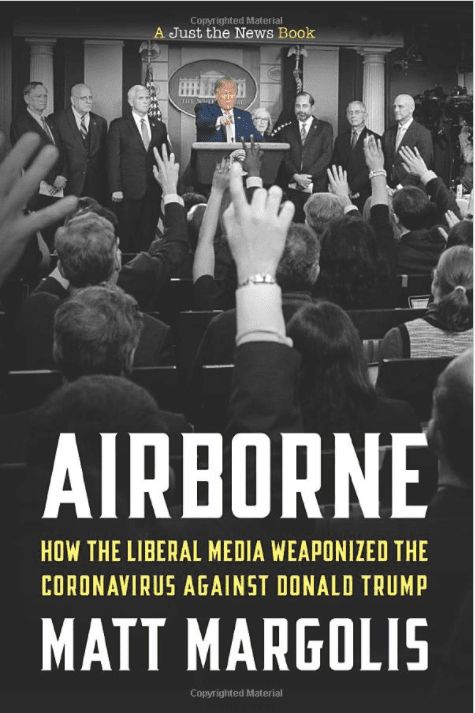 As the election nears, it is a near certainty that the media will resurface the pandemic response to try and damage President Trump. As noted in the book’s introduction, the COVID-19 response will be weaponized this cycle in the same way Hurricane Katrina was weaponized against George W. Bush. In both cases, the response was robust and appropriate. Yet the corporate media will spin a narrative not remotely related to the reality of the situation.

In Airborne, Margolis gives the president’s supporters a complete guide to combatting COVID-19 lies. The news cycle moves so quickly that the full list of dirty deeds by the corporate talking heads is challenging to recall. Many highlighted in the book are astonishing in their boldness.

One that is particularly disturbing is the media’s assault on President Trump expressing hope about the potential of treatment with the drug hydroxychloroquine. Having researched this medication extensively, this has been one of the most irritating examples of political reporters overestimating their intelligence. Basic internet searches could have informed them about why this medication was even under investigation.

Margolis details the media’s malfeasance on this topic entirely. Everything from blaming President Trump for a woman giving her husband fish tank cleaner, to flouting completely flawed studies. Perhaps their biggest lie was the incidence of deadly side effects in using the medication. In encouraging people to fear taking the drug, the media meatheads may have hurt people. Their rhetoric was astounding, given millions of people take the medication daily for other illnesses.

The daily briefings were a gift to the corporate media in several ways. Airborne details their use of manipulated clips to give the impression the president said something he did not. Like his Charlottesville comments, a short snippet taken out of context was not uncommon.

One example of this behavior was the hoax comment. At a rally, President Trump said the way the media and Democrats were talking about the response was the next hoax. The media turned this into a story about the president calling the virus itself a hoax.

Much like the butchered Charlottesville quote, no matter how many times the actual context was provided, the media and Democrats kept running with the abbreviated quote. Margolis runs through specific examples across the media landscape, pushing the sound bite with no context. A similar thing happened when the media reported President Trump was criticizing governors for not being appreciative. The bright spot there was the president got to turn it on a CNN reporter by making him read the full comments on air.

In their opposition to Trump at all costs, the members of the corporate media pushed Chinese propaganda in response to the president’s criticisms of the totalitarian regime. President Trump correctly pointed out how China, together with the WHO, misled the world about the virus. Early in the pandemic, they even denied human-to-human spread. Yet the media pushed the preferred narratives of Beijing to attack the president at several junctures.

In Airborne, Margolis does an excellent job of chronicling the media’s opposition at any cost mentality. Whether it was aimed at keeping American’s scared or distorting the actions of the administration, they weaponized the pandemic for political purposes. After reading the book, which is meticulously sourced, their political agenda is clear. The corporate media has rarely told Americans the story. Instead, they tell us a story.