BEALLSVILLE, Pennsylvania — If you are driving too fast, you’ll miss her. It often happens at the pitch of the rolling Appalachian Mountain, where she has stood for nearly 100 years: the statue of a sturdy frontier woman holding a rifle in one arm and an infant in another, with another child clinging to her long skirt.

She is Madonna of the Trail. Constructed in 1927, the warm color of the algonite stone provides a telling portrayal of temperateness one imagines a woman protecting her treasure, and about to face uncertainty, would possess.

Her beauty does not lie in her features, as she is rather plain. Instead, it lies in the strength she emotes as a symbol of the American frontier woman, one of hundreds of thousands who often left behind a more quiet life with their husbands in exchange for what they hoped was economic opportunity.

Her expression shows that she knows such an exchange will come at a price.

She is one of 12 identical statues placed across the country in 1928-29 along two migration routes, the National Road and the Santa Fe Trail. People can view her towering, 10-foot likeness not only here in Pennsylvania but also in Maryland, West Virginia, Kansas, Colorado, New Mexico, Ohio, Indiana, Illinois, Missouri, California and Arizona.

As she is here, she is often overlooked or neglected. Attempting to pull over and walk around her statue was risky. The cars fly by at a blind spot on a curve and the arc of a hill. But looking at the strength portrayed in every inch of her construction and image, it’s unclear whether or not she’d care if you stop.

If you do stop, you’d best not whine about it.

A frontier woman probably would have thought it frivolous to honor her, as she is just trying to make a way for herself and her family.

The project to build all 12 monuments to highlight the courage of these women was spearheaded by the Daughters of the American Revolution to remind us that the Wild West was not just a place of stories but also families looking for a fresh start. Along the way, on a quest that included breathtaking vistas, hardship, lawlessness and finding a sense of place in the wide-open spaces of the American frontier, they might find gold.

We’ve come to a remarkable moment when our culture supports the destruction of monuments designed to capture a sliver of our history. Often, both the mob and the liberal media that chronicle these destructive actions are illiterate in their understanding of history.

When they first came for the statues of Confederate generals, it was considered justified. When they came for the statue of Union Gen. Ulysses S. Grant and the Emancipation Memorial erected in 1876, honoring Abraham Lincoln and paid for by freed slaves, it was something else they wanted to express: hatred of America.

Activists dismiss any support for keeping the Emancipation Memorial. They claim that because Lincoln is standing over a kneeling slave with broken shackles around his wrists, it is racist.

“People tend to think of that figure as being servile, but on second look, you will see something different, perhaps. That man is not kneeling on two knees with his head bowed. He is in the act of getting up. And his head is up, not bowed, because he’s looking forward to a future of freedom,” Marcia Cole, a member of the Female RE-Enactors of Distinction, told local Washington station WJLA. She also said the shackle on the portrayed freed man’s wrist is attached to a broken chain.

The Madonna of the Trail monuments were built to evoke American exceptionalism, something many people still respect even though the drivers of our toxic political culture have found an abundance of manufactured reasons to decry it.

Were the men and women in history who set out to travel west perfect? Of course not. They were flawed — most of them poor or middle-class immigrants looking for a better life. Those who possessed wealth and power did much to undo the lives and traditions of the natives of western territories, but that does not mean we cast off or do not remember the history of what happened here, and everywhere the Madonnas stand.

Maya Angelou, American poet and civil rights activist, once said, “History, despite its wrenching pain, cannot be unlived, but if faced with courage need not be lived again.”
The drive along this stretch of U.S. 40, the National Pike, is graced with hundreds of American flags blowing gently from porches and flagpoles in front of homes and businesses. There is not a lot of wealth here. The houses are humble, mobile, and some have seen better days.

Alabaster mile markers dot the highway with “Cumberland-Wheeling” etched across the top as the miles peel away between each stretch.

The drivers of our culture seemingly strive to disavow our historical attempts to achieve true exceptionalism, because we have failed along the way. The truth is, we will always be less than perfect, but we cannot let that or rage ever get in the path of attaining our constitutional ideals. 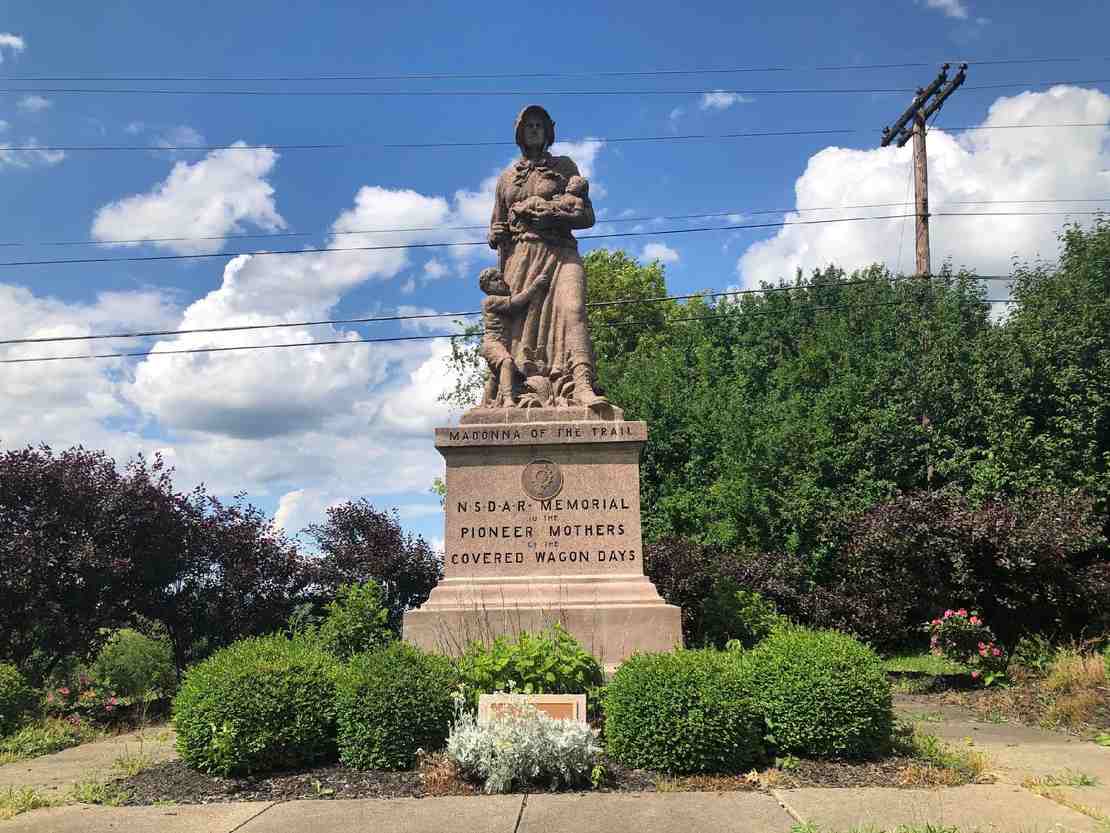