Update 7:24 p.m.: Facebook is coming back online, albeit with a few bugs and remaining outages. Facebook’s Twitter account and its CTO tweeted out updates in the last hour:

To the huge community of people and businesses around the world who depend on us: we're sorry. We’ve been working hard to restore access to our apps and services and are happy to report they are coming back online now. Thank you for bearing with us.

Facebook services coming back online now – may take some time to get to 100%. To every small and large business, family, and individual who depends on us, I'm sorry.

There’s been no official announcement from Facebook about the source of the problem, other than they’re experiencing “networking issues”:

As of publishing time, Facebook has been down for several hours, along with WhatsApp, Instagram, Messenger, and Oculus VR. But that’s just the beginning. The social media behemoth’s stock prices also crashed on Monday, making the company’s already bad day even worse. The plummet in stock prices came as a Facebook executive was on CNBC defending the company against claims by a whistleblower that the company prioritized profit over the safety of young Facebook users.

Oh, and speaking of that Facebook whistleblower—who leaked a bunch of documents to the Wall Street Journal a while back—she unmasked herself on “60 Minutes” last night.

Users who tried to access Instagram and WhatsApp were greeted by a 5xx server error, while Messenger and Facebook have been buggy all day, with most users reporting that they’re unable to use the platforms.

There are also problems being reported with Oculus VR, the Facebook-owned virtual reality system. Users are reportedly able to use games they’ve already uploaded to their systems, but cannot install new games. Social features are also not working.

Downdetector reports that the Facebook problems began at around 11 a.m.

In a weird twist to this story, IsItDownNowRightNow, a website that tracks internet outages, seems to be having problems of its own, with the site being unreachable at times, possibly because half the internet is trying to find out what’s going on with Facebook. 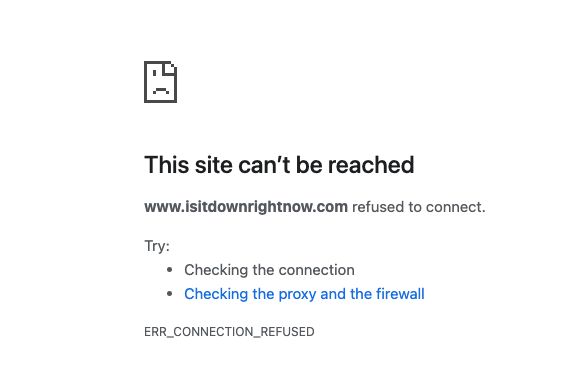 And now there are reports coming in about issues with Gmail, according to Downdetector:

There’s been no word yet from Facebook about what’s causing the problems. but earlier in the day Brian Krebs, an investigative journalist who focuses on cyber security issues, tweeted this: “Confirmed: The DNS records that tell systems how to find http://Facebook.com or http://Instagram.com got withdrawn this morning from the global routing tables. Can you imagine working at FB right now, when your email no longer works & all your internal FB-based tools fail?”

Confirmed: The DNS records that tell systems how to find https://t.co/qHzVq2Mr4E or https://t.co/JoIPxXI9GI got withdrawn this morning from the global routing tables. Can you imagine working at FB right now, when your email no longer works & all your internal FB-based tools fail?

Krebs wrote on his website, Krebs on Security, “We don’t yet know why this happened, but the how is clear: Earlier this morning, something inside Facebook caused the company to revoke key digital records that tell computers and other Internet-enabled devices how to find these destinations online.”

Doug Madory is director of internet analysis at Kentik, a San Francisco-based network monitoring company. Madory said at approximately 11:39 a.m. ET today (15:39 UTC), someone at Facebook caused an update to be made to the company’s Border Gateway Protocol (BGP) records. BGP is a mechanism by which Internet service providers of the world share information about which providers are responsible for routing Internet traffic to which specific groups of Internet addresses.

In simpler terms, sometime this morning Facebook took away the map telling the world’s computers how to find its various online properties. As a result, when one types Facebook.com into a web browser, the browser has no idea where to find Facebook.com, and so returns an error page.

To make matters worse, Facebook employees are not able to communicate with one another because the company’s email and other tools are managed in-house using the same domain. Oh, and this is happening:

Was just on phone with someone who works for FB who described employees unable to enter buildings this morning to begin to evaluate extent of outage because their badges weren’t working to access doors.

Krebs said the changes “had to have come from inside the company,” although it’s not known if this was done maliciously or by accident.

Adding insult to injury, several domain registration companies are showing the Facebook.com domain as for sale. 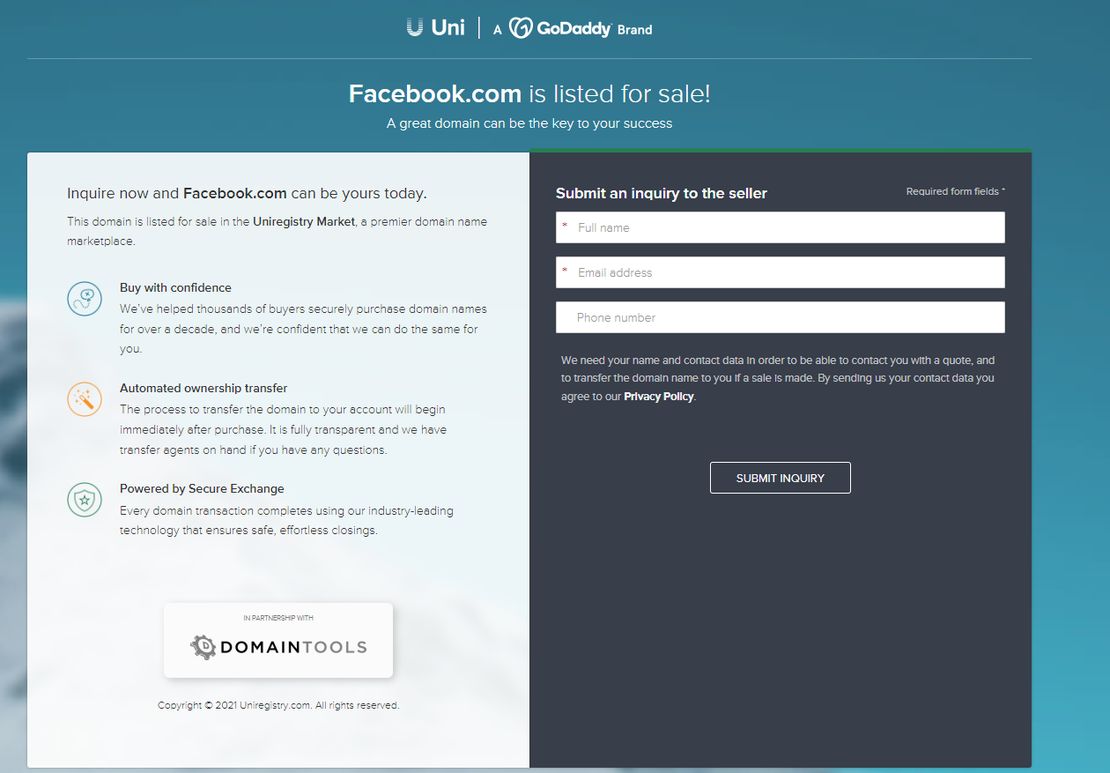 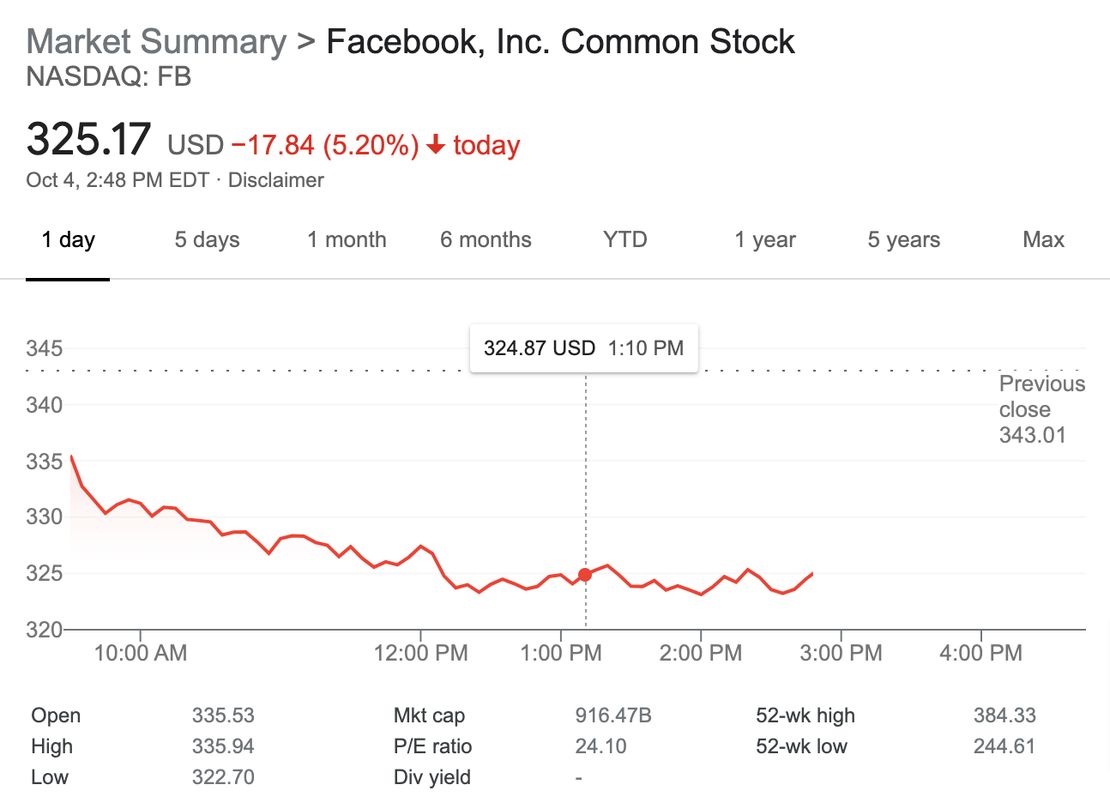 It’s still got a way to go before it reaches the 52-week low, but that may yet happen today. Cry me a river.

On Sunday night, now-unmasked Facebook whistleblower Frances Haugen spoke out against the company’s policies on “60 Minutes.” Haugen, a former product manager for Facebook’s civic misinformation team (why do the job titles at Facebook always sound like they were invented by George Orwell?), said the company is “paying for its profits with our safety.”

Haugen, who worked at both Google and Pinterest before joining Facebook, said the company was “substantially worse” than anything she’d seen before, which led her to leak tens of thousands of documents revealing the company’s internal research.

Pelley asked about one particular document that showed Facebook admitting it had evidence that “hate speech, divisive political speech and misinformation on Facebook and the family of apps are affecting societies around the world.”

“Facebook has realized that if they change the algorithm to be safer, people will spend less time on the site, they’ll click on less ads, they’ll make less money,” accused Haugen.

In what may or may not be a coincidence, Facebook’s vice president of content policy, Monika Bickert, went on CNBC’s “Squawk Box” on Monday morning just as the stock began to crater.

Bickert defended Facebook’s policies, saying, “If we were a company who didn’t care about safety, if we were about trying to prioritize profit over safety, we wouldn’t do this kind of research.”

“The whole point is understanding how we can be better and make a better experience,” she said.

Meanwhile, the Twitterverse is having a field day with Facebook’s terrible, horrible, no good very bad day, with many saying that we’re all probably better off with it out.

Another famed leaker weighed in:

Facebook and Instagram go mysteriously offline and, for one shining day, the world becomes a healthier place. #facebookdown

Also, maybe Whatsapp, Facebook and Instagram all going down at once is a good wake-up call that one company should not have THIS much power and control and influence over all of us, right?

That’s an excellent point, no? Media companies, in particular, have been increasingly dependent on Facebook to get the news out on a platform that has shown not only hostility toward conservative points of view, but a willingness to work with the White House to sway elections and spread Democrat talking points.

PJ Media is still on Facebook, but if you’d like to bypass the malign gatekeepers over there, you can stay in touch with us in other ways. You can subscribe to all our newsletters here and get our content delivered directly to your inbox. You can also follow us on Twitter (and follow me here). Also, please bookmark our site and come to us directly rather than relying on Facebook to send you our articles. And if you haven’t yet done so, please consider becoming a VIP member. You get lots of bennies, like members-only live chats, exclusive articles and podcasts from the PJ Media contributors you’ve come to know and trust, and a members-only comment section. Your support will enable us to continue bringing you excellent reporting and opinion without the social-media censors getting in our way. You can join here. Use the promo code BIGTECH for 25% off your membership today.