The coronavirus may not be as deadly as we once may have feared, but it seems to have caused a great many people to lose their minds. Dr. Fauci never warned us this could happen.

How else to explain the nationwide paroxysms of grief over the death of George Floyd, however unjust his death may have been? Floyd was after all a habitual criminal who, among his many misdeeds, once pointed a gun at a pregnant woman’s stomach in the course of invading her home and robbing her.

If indeed Floyd’s death is found to have been a murder, how else to explain the hysteria over this particular murder while so many others are ignored without so much as a shrug? If black lives really matter, doesn’t it suggest insanity that a small number of them seem to matter more – a great deal more, in fact – than thousands upon thousands of others?

And how else to explain that the nation’s police officers, who only a few weeks ago were praised in some quarters for enforcing restrictions on such perilous activities as surfing, playing in the park, and – gasp! – going to church, are now regarded as villains for trying to prevent the arson, looting, and occasional murder that have accompanied what we are endlessly assured are “mostly peaceful” protests?

Yes, there can be only one explanation: The coronavirus causes madness, and even if you have escaped it so far, it will be hard to escape the effects it has had on your friends and neighbors. How diabolical President Xi is revealed to have been.

I give you just one of the more glaring examples of this lunacy, the case of Martin Gugino and his treatment at the hands of the Buffalo Police Department.

As has been the case in many cities, Buffalo’s “mostly peaceful” protests have been punctuated by violence. On June 1 in that city, two people were shot, stores were looted, and three officers were injured, one of them seriously, when a woman drove a car through a police line. The next day, in response to those incidents, Erie County executive Mark Poloncarz imposed a curfew, effective from 8 p.m. to 5 a.m.

On June 4, protesters were gathered in Niagara Square, a public plaza at the center of Buffalo’s government district. When they lingered beyond 8 p.m., Deputy Chief Police Commissioner Joseph Gramaglia ordered police to enforce the curfew and clear the area. Officers from the Buffalo Police Department and the New York State Police assembled in a skirmish line and began walking north in front of City Hall.

In a now widely seen video, shot by WFBO radio reporter Mike Desmond, Gugino can be seen walking directly toward the officers and stopping in the path of one of them. Note that Gugino is carrying (alas for him, not wearing) a helmet, suggesting he was a veteran protester and prepared for a confrontation.

Upon further scrutiny, Gugino’s behavior is even more curious. Note the odd way Gugino holds and manipulates his cellphone as he approaches and makes contact with the officers, pressing it against one and then another. 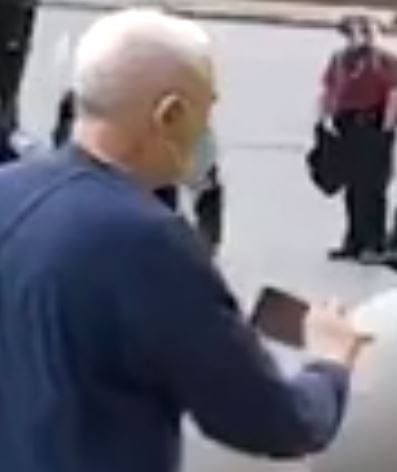 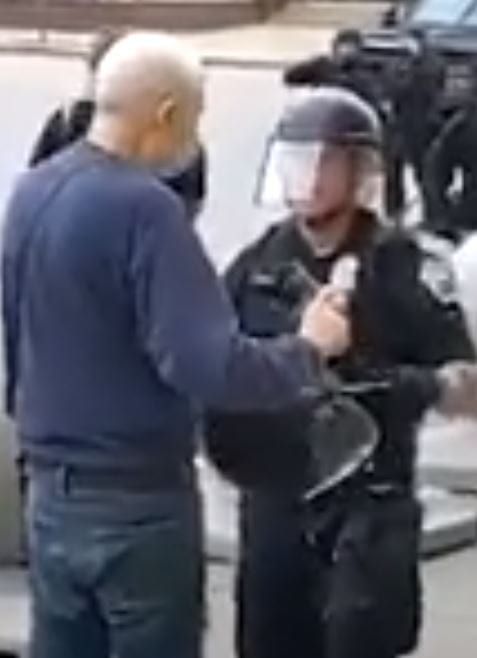 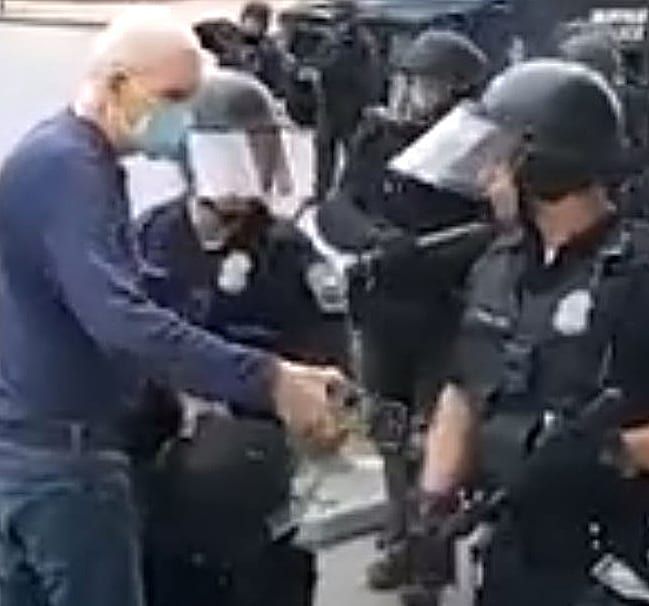 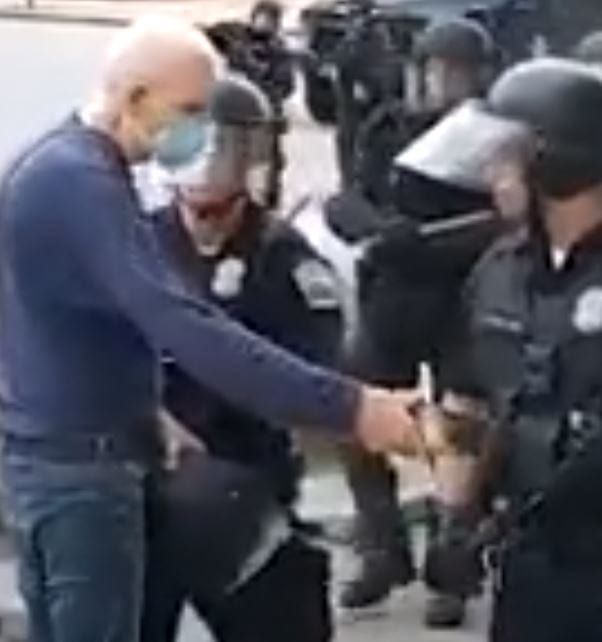 Gugino may have been trying to capture radio and/or cellphone data from the officers via their Bluetooth and Wi-Fi devices, a violation of both state and federal laws. This may sound farfetched, but I’ve been trained in these methods by former military special forces operators who used them while working covertly overseas, and to me, this appears to be exactly what Gugino is doing.

If it still seems implausible that some superannuated hippie would be engaged in intelligence gathering against law enforcement, have a look at Gugino’s Twitter feed (which has since been deleted), where he proudly expresses his revolutionary ideals and his animus for the police. 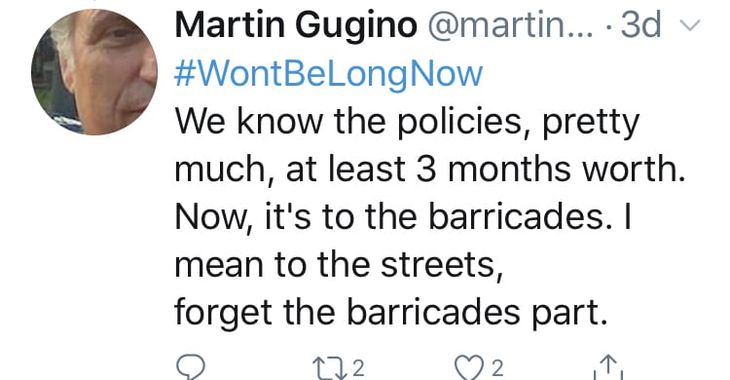 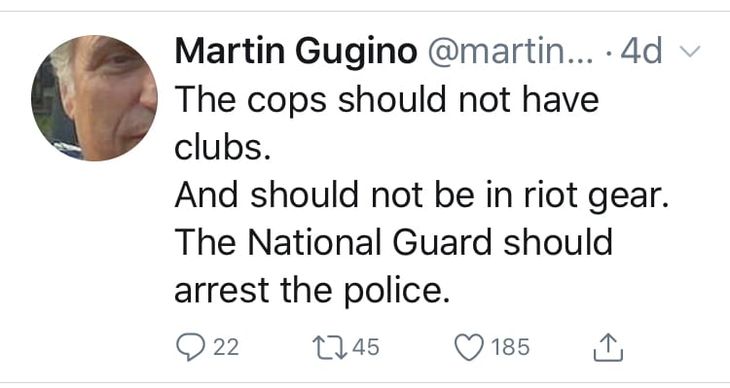 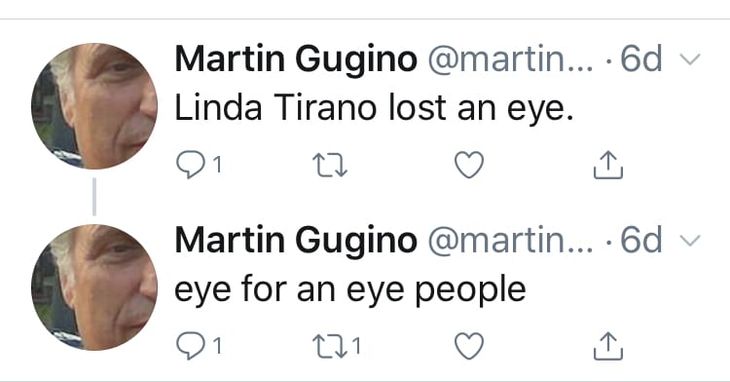 In the United States, we can be proud that even aging revolutionaries are protected by the law, but they are also subject to it, so let’s examine Gugino’s actions and those of the officers and determine what other violations of the law may have occurred.

While moving on a skirmish line, officers are trained to advance in unison and maintain the integrity of the formation. If even a single officer is impeded, the entire line halts until the impediment can be addressed. In acting as he did Gugino succeeded, at least momentarily, in holding up the line, arguably a violation of Section 195.05 of the New York Penal Law.

As Gugino engages with the two officers, a third officer comes up from the rear and directs the others to keep moving. Voices can be heard shouting at Gugino to move back as one officer, the one directly in front of Gugino, raises his baton in a two-handed grip and shoves him. The officer to Gugino’s right extends a hand and also gives him a push.

It did not appear the force used by either officer was inordinately vigorous. Clearly they intended to move Gugino back rather than knock him down. Still, despite his presumed expertise in dealing with such confrontations, Gugino is perhaps not as nimble as he once was. He stumbled backward for a few steps before falling to the sidewalk. As blood begins pooling beneath Gugino’s head, one of the officers stops as if prepared to help him, but he is directed to keep moving.

If Gugino had not fallen, few but the most ardent cop-haters (like Gugino himself) would argue the officers had used excessive force and violated the law. But here we are in a time of mass hysteria, so Officers Robert McCabe, 32, and Aaron Torgalski, 39, have been suspended without pay and charged with felony assault. They have pleaded not guilty and were released without bail.

I will be the last to deny there have been instances of excessive force as police officers across the country confronted the “mostly peaceful” protests. This is not one of them. In retrospect, it of course would have been preferable to grab Gugino and pass him off to trailing officers to be placed under arrest or otherwise dealt with.

But as it happened, the force used against Gugino was measured and appropriate, and it was delivered in response to a deliberate provocation by an experienced protester. The charges against the officers are a travesty, and shame on Erie County district attorney John Flynn, who handed over a pair of scalps to the mob in the apparent hope they will choose him last when they take to hanging people from the lampposts.

Flynn is not alone in his disgrace. Members of the media, eager to present Gugino as another victim of unjustified “police violence,” have omitted details and presented selectively edited video in pursuit of that aim. On MSNBC, for example, where one would expect no less, Alex Witt told her viewers Gugino was “violently shoved to the ground and then left unattended.”

Honest people can debate the level of violence involved, but as for the allegation that Gugino was left unattended, this is an unvarnished lie, albeit one easily believed if you base your impression on what was shown on Witt’s program. In Witt’s version of the video, it ends as officers march indifferently beyond the fallen man. In the complete video linked above, officers trained as EMTs can be seen ministering to Gugino within seconds of his falling. The officers who passed Gugino were aware of the EMTs’ presence and were acting in accordance with their training, as Witt would have discovered had she done some elementary investigating or even taken the time to watch the unedited video.

But why let the truth get in the way of the narrative?

You read it here first: Though they will endure a lengthy ordeal, Officers McCabe and Torgalski will not be convicted of a single charge, nor should they be. The mob is winning, at least for the moment, but sanity will one day be restored. What will remain of this country when it is?