My organization, ACT for America, is the largest national security grassroots organization in the U.S., with over one million members. This week, its annual dinner gala was canceled by Mar-a-Lago.

The one thing I’ve learned from you Mr. President is “Never ever give up.”

The left has weaponized name-calling. They lie, twist the truth, take words out of context, and do whatever they can to destroy those with whom they disagree.

You know that more than anyone.

This is a defining moment for free speech in America and is bigger than just a canceled gala.

Indeed, it is bigger than Brigitte Gabriel and ACT for America. This is a defining moment for our nation. Are we going to allow the left to define each and every one of us based upon shameful lies? The same people who call you Nazi, racist, bigot and white supremacist, Mr. President, are the same people who label me and my over one-million-member organization “anti-Muslim.” You are not a Nazi—and we are not anti-Muslim.

As one of the largest conservative organizations in the nation, we are your national security boots on the ground. Mr. President, please do not throw us under the bus because the SPLC, NYT and Miami Herald screamed “hate group” to silence us.

Past speakers and honorees of ACT For America events include: Tom Homan, former acting ICE director; Rep. Mike Pompeo (now your secretary of State); Rep. Jim Bridenstine (now your NASA administrator); Rep. Ron DeSantis (now governor of Florida); and Sen. Marsha Blackburn—just to mention a few. Are they all haters?

Mr. President, the truth has become “hate speech.” When do we say enough?

Our nation is at a crossroads. I ask you to stand with me and millions of everyday Americans who are not just members of ACT for America, but are members of scores of conservative organizations across the country.

We are tired of having false and hateful labels put on us—labels that define us as the exact opposite of who we really are and what we believe. We are God-fearing, America-loving, veteran-honoring, flag-waving patriots who love this country and will fight to our last breath to protect her from all threats, foreign and domestic.

I ask you to stand with me in defense of free speech, in defiance of the false labels, and with millions of Americans tired of being labeled racists, bigots, white supremacists, Nazis, and Islamophobes.

ACT for America’s 1.6 million members all across this great nation want this gala back on—we want to rename it the “Honoring Freedom of Speech Gala”— and we want you as our guest of honor.

This is our defining moment.

Our founding fathers gave everything, and most of them died broke to give us the country and the freedoms we enjoy today. The least we can do is fight to preserve that freedom for generations to come.

It was George Washington himself who said, “If freedom of speech is taken away, then dumb and silent we may be led, like sheep to the slaughter.”

This statement has never been more relevant than it is today, Mr. President. Freedom of speech is under attack and it is time we fight for it as our founders intended.

I came to this country from Lebanon as a legal immigrant. America is not a geographical location. America is a spirit. It is an attitude. It is the spirit of millions who had an exceptional ability to fight for the best version of themselves and what they could be. They created the greatest country on the face of the planet. Your grandfather and I came here to become a part of this exceptional nation called America.

To quote from one of your speeches Mr. President: “Never stop fighting for what you believe in and for the people that care about you. The more that a broken system tells you that you are wrong the more you should know that you must keep pushing forward.”

We want to push forward, Mr. President. We want to show those who seek to silence you and millions of other God-fearing, nation-loving men and women all across this country that we won’t back down. That they will never succeed in silencing us.

Stand with us, Mr. President. Reverse the decision and come celebrate freedom of speech at your Mar-a-Lago as our guest of honor at this gala event. Continue to lead the charge to make our nation stronger, safer, more prosperous than ever before, and to show the world that Americans’ speech is free now and it will be free forevermore.

Brigitte Gabriel is the chairman of ACT for America, the largest grassroots national security organization in the U.S. and a NYT best-selling author. Her latest book is “RISE” in Defense of Judeo-Christian Values and Freedom.

Not Even Mar-a-Lago Is Safe: Trump Org Bows to Far-Left Demand to Cancel Conservative Event 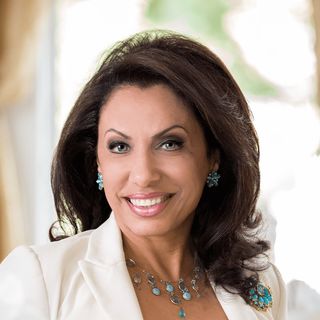 Brigitte Gabriel is the chairman of ACT for America, the largest grassroots national security organization in the U.S., and a NYT best-selling author. Her latest book is “RISE” in Defense of Judeo-Christian Values and Freedom.
Read more by Brigitte Gabriel
Tags: 2019 DONALD TRUMP FREE SPEECH SPLC