Zombie Witnesses a 9/11 Truth March at the DNC (Updated) 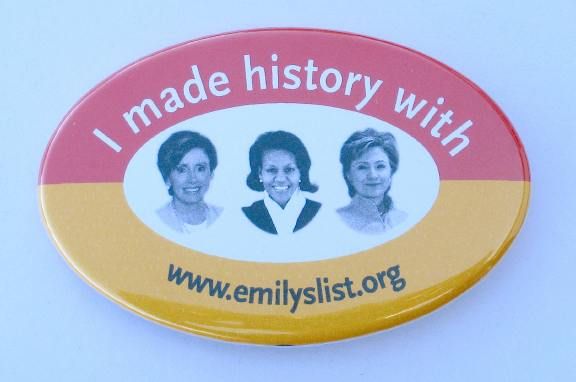 One of the hottest tickets at the Democratic National Convention was the “EMILY’s List Gala” starring Hillary Clinton, Michelle Obama and Nancy Pelosi, held at the Sheraton Hotel on Tuesday afternoon, August 26. Here’s my souvenir button. 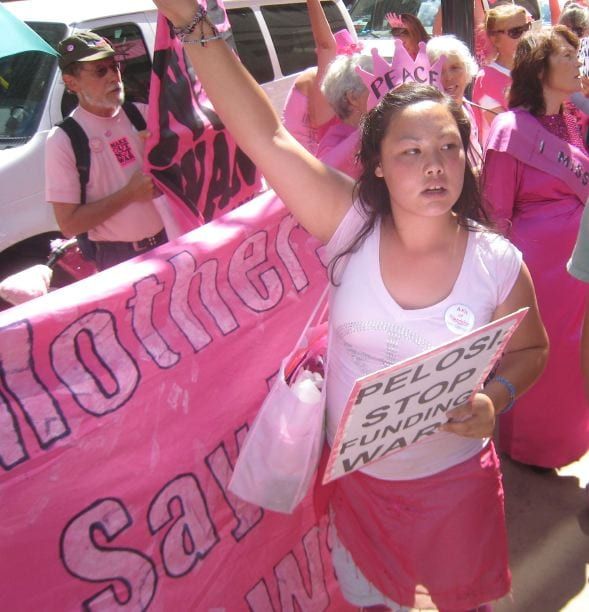 Code Pink, whom you’d think would be happy about an event celebrating a bunch of liberal women politicians, showed up to protest the gala. Partly this is because of their obsession with Nancy Pelosi and her failure to impeach George Bush, but mainly it’s simply because Code Pink will go anywhere where they think there will be media.

This video shows the young Code Pinker depicted above leading them in a chant of “This is what democracy looks like!” outside the Sheraton; she practically screams herself hoarse she’s so frantic, and just loves all the attention she’s getting. 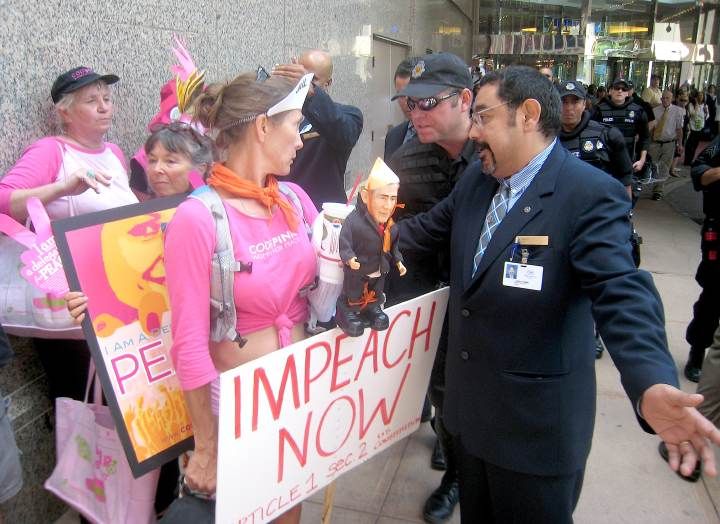 Some of the other Code Pinkers tried to oonch themselves closer to the entrance, but the Sheraton security team and the police were having none of it. 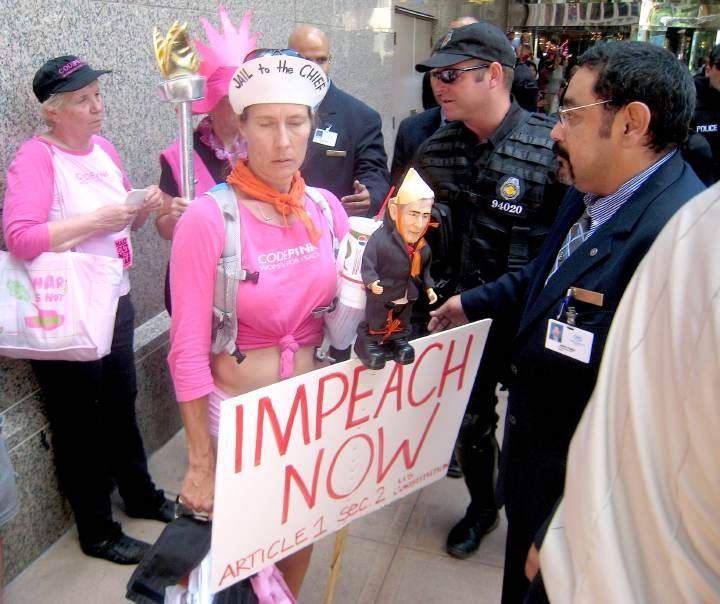 Even after being ordered to retreat back to the sidewalk, the Code Pink ladies refused at first to budge, until later when they were physically escorted off the Sheraton’s private property. 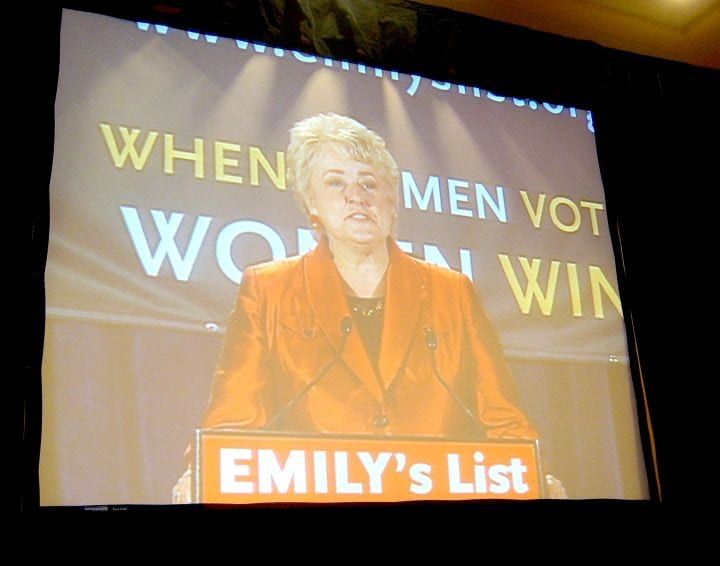 I ventured downstairs into the Sheraton itself; the warm-up speakers were being broadcast on big screens outside the ballroom where the gala was being held. Here’s EMILY’s list founder Ellen Malcolm. (No, her name is not Emily, but Ellen; EMILY is actually an acronym for the phrase “Early Money Is Like Yeast.” Seriously.) 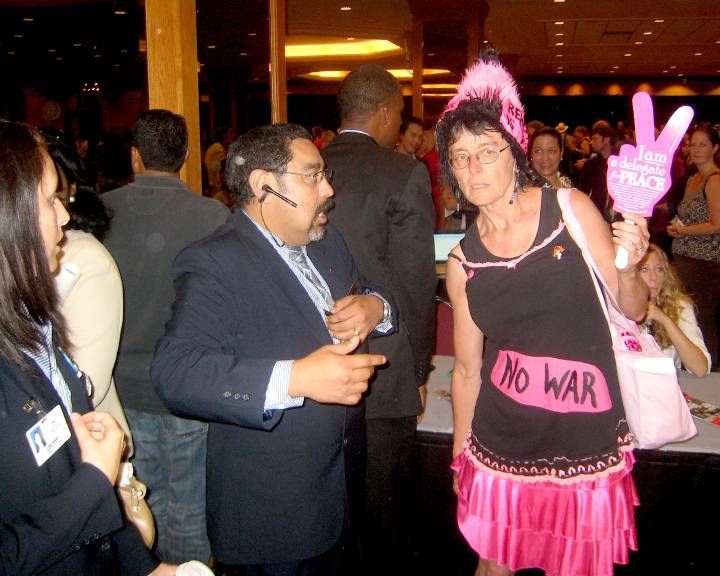 Periodically, Code Pinkers would successfully sneak into the Sheraton and try to crash the gala. But in each instance that I saw, they were spotted by security and instructed to leave immediately. 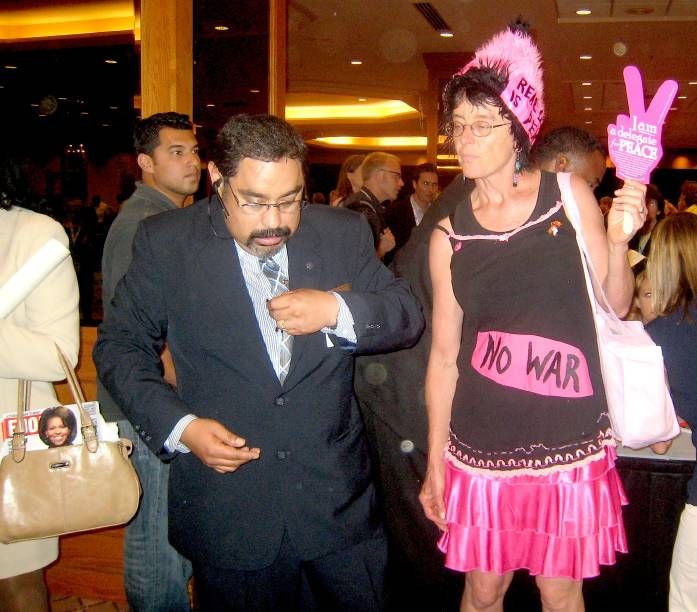 Code Pink’s strategy when told to leave, as we saw earlier, is to just stand there and do nothing. So the security detail would call for backup. 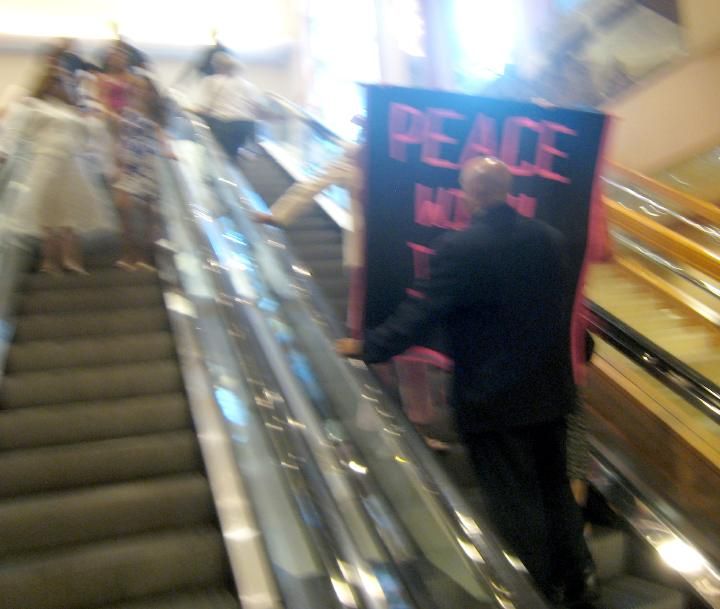 One by one, over and over, Code Pink would-be infiltrators were escorted back up the escalator and kicked out of the building. 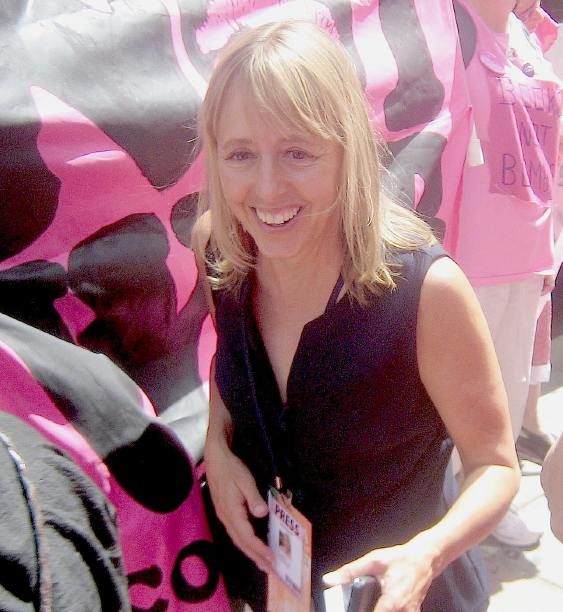 Code Pink leader Medea Benjamin showed up (with a fake press pass) to lead the infiltration efforts, but I don’t think she was any more successful than the others. 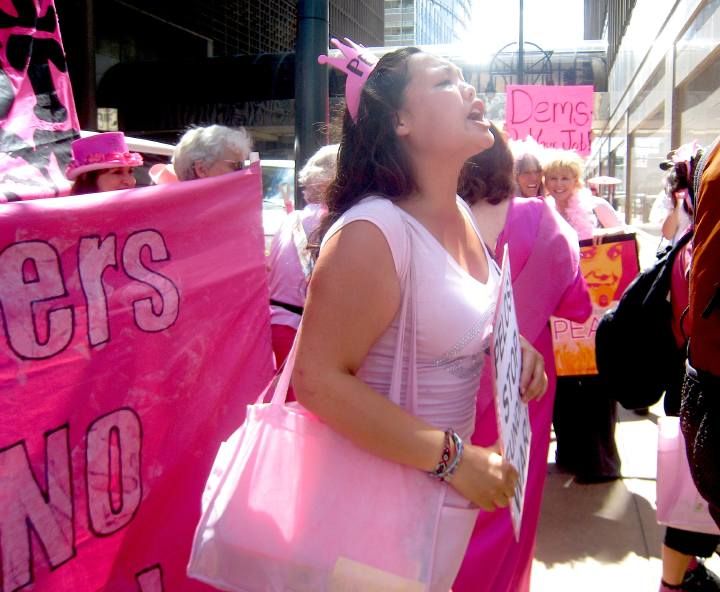 And so, confined to the sidewalk, all Code Pink could do was scream. 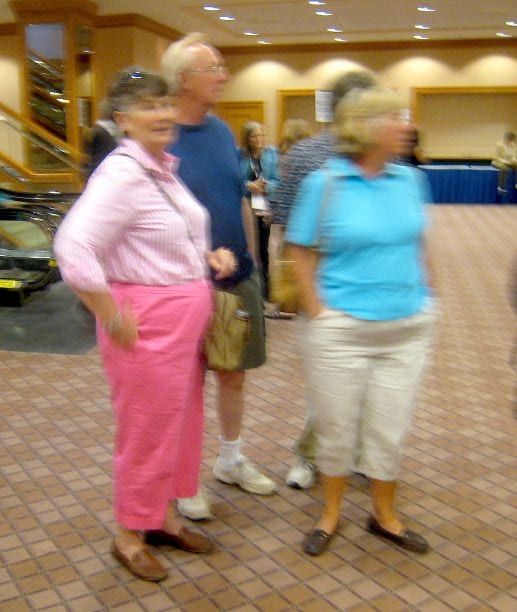 Some naive and wholly innocent EMILY’s list members, unfamiliar with Code Pink and their tactics, showed up wearing pink clothes, unaware that this immediatley placed them on the “watch list” and subjected them to questioning and monitoring by security. 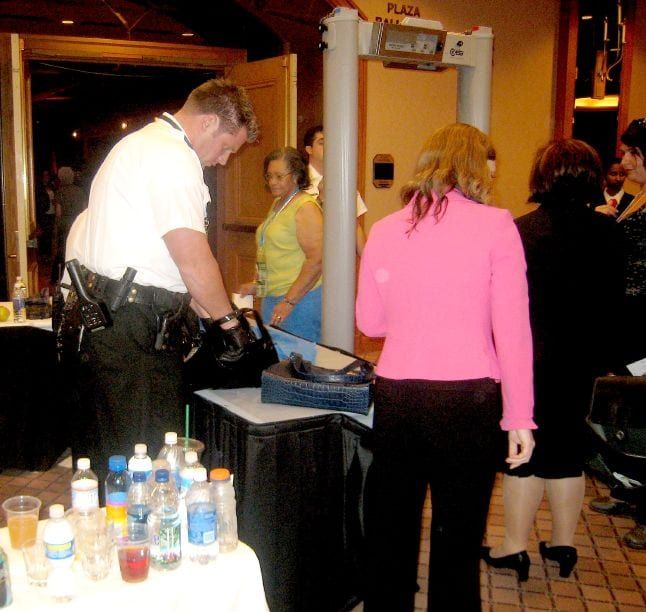 Anyone wearing pink who tried to enter the ballroom was subjected to extra searching by the Secret Service. The security checkpoint was as thorough as it is at airports: no liquids allowed in, metal detectors, all bags inspected. 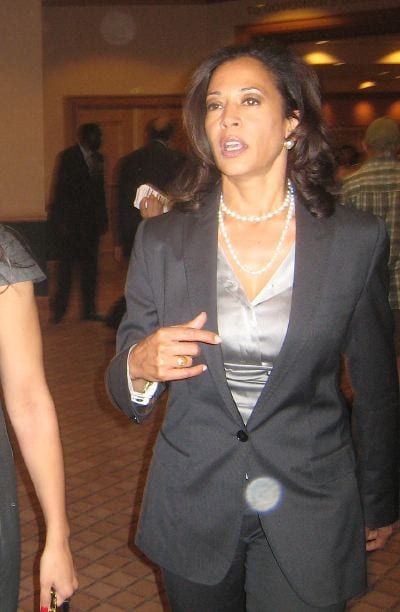 All sorts of politicos were milling around the lobby, if you knew who to look for. For example, as mentioned in my earlier “Celebrity-Hopping” report, I ran into San Francisco Attorney General Kamala Harris. 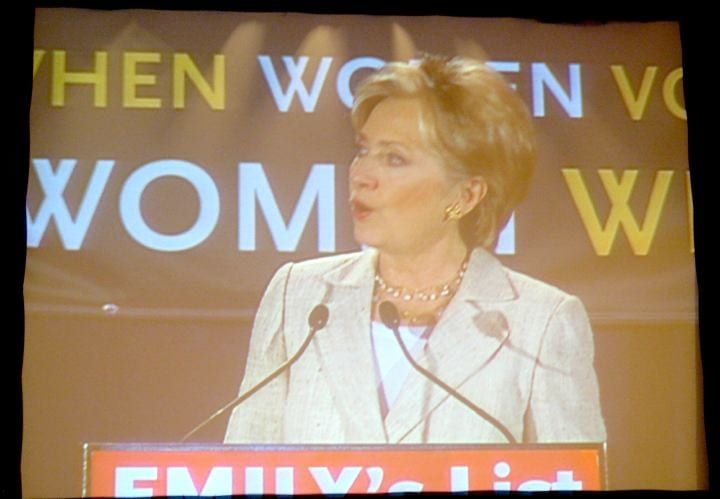 Finally, the big stars came out to speak, and the whole thing seemed to go off without a hitch. As to what they said: Does it really matter? 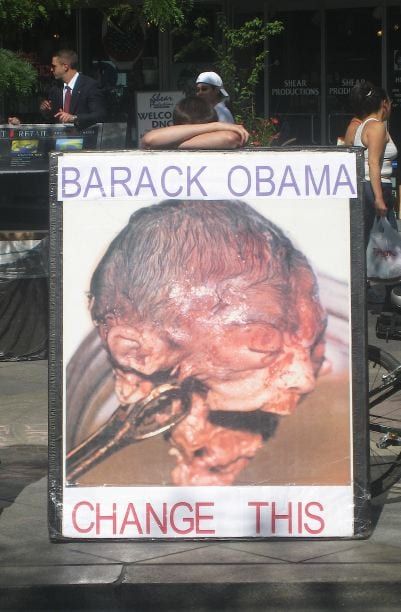 Thinking there was nothing more of interest to report on, I left the ballroom, and emerged only to find that a new protest had popped up outside the Sheraton, on a completely different topic: abortion. On one side were extreme anti-abortion protesters who displayed disturbingly visceral signs purporting to show the results of late-term abortions. 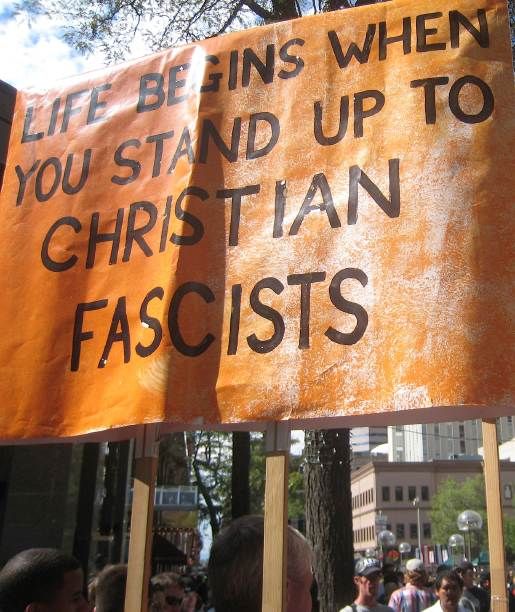 Facing off against them were even more extreme pro-abortion and anti-Christian protesters, led by World Can’t Wait. Middle ground? Compromise? Forget about it. 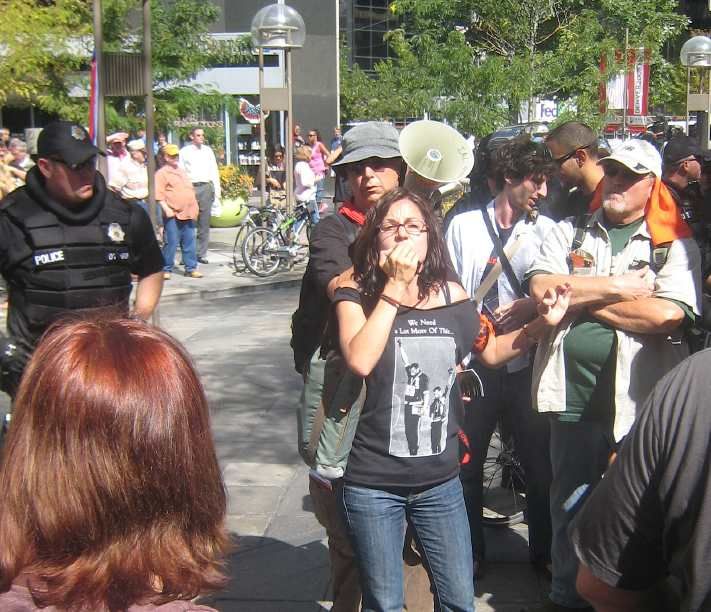 A pro-abortion (her own words) woman went on a long diatribe denouncing Christianity and praising abortion. 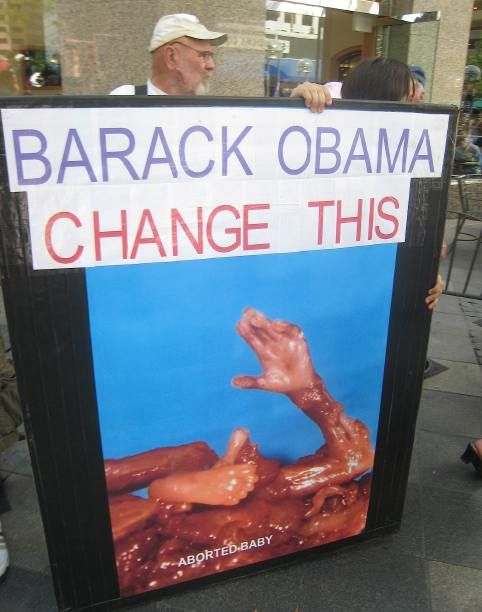 The anti-abortion protesters, on the other hand, simply stood there silently with their stomach-churning signs. 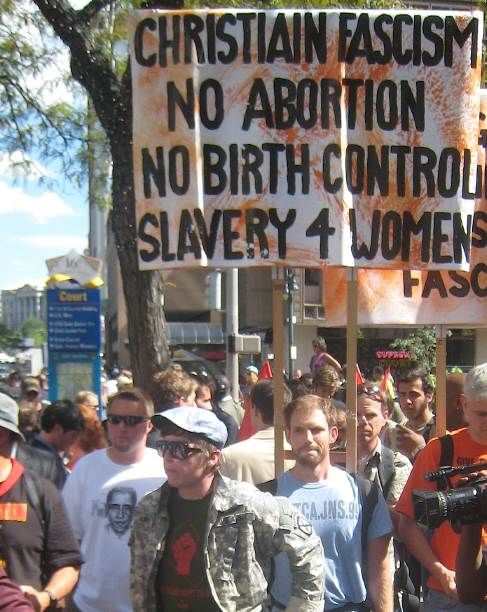 If you’re going to protest against something, you really ought to learn how to spell it. 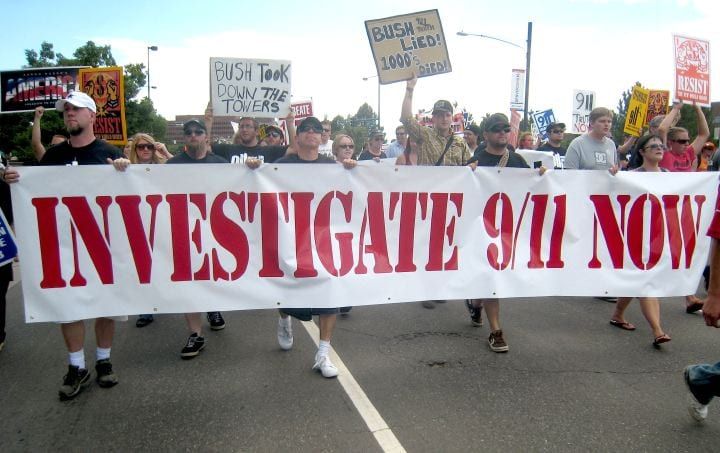 On the second day of the Democratic National Convention in Denver, a “truther” organization called We Are Change sponsored the convention’s “9/11 Truth March.” I didn’t expect more than a few dozen people to show up, but was surprised and a little disturbed at how large it actually turned out to be — the crowd numbered in the hundreds, not the dozens. 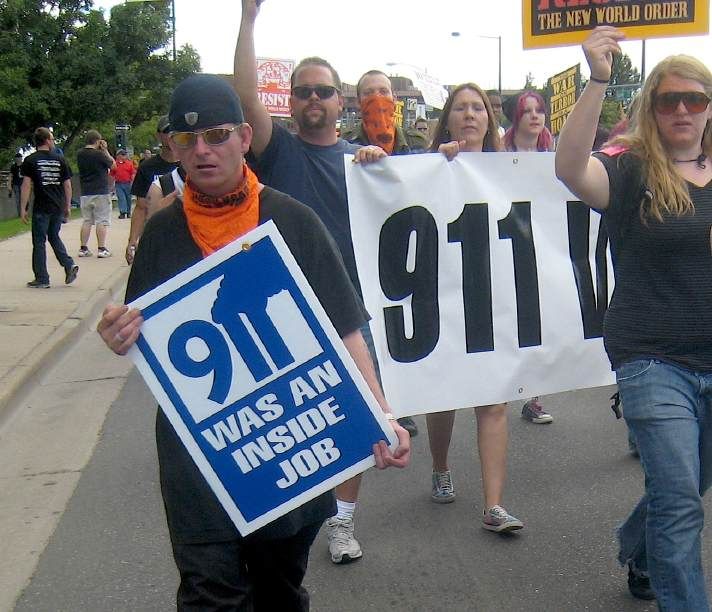 I really, really wonder what thought processes go through these people’s minds; I’ve been photographing truthers for nearly six years now and I still don’t have the slightest clue as to what motivates them. 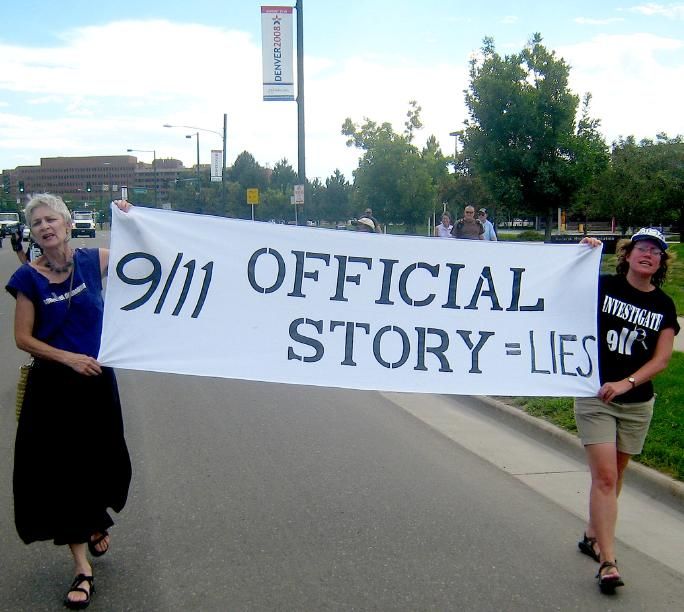 Aside from the obvious: Dementia. 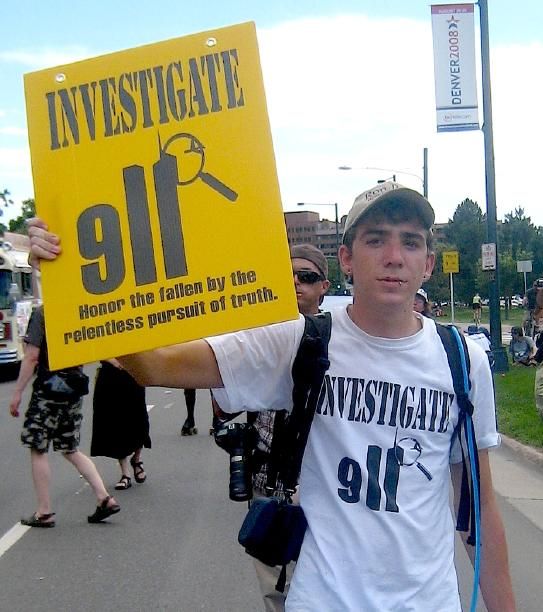 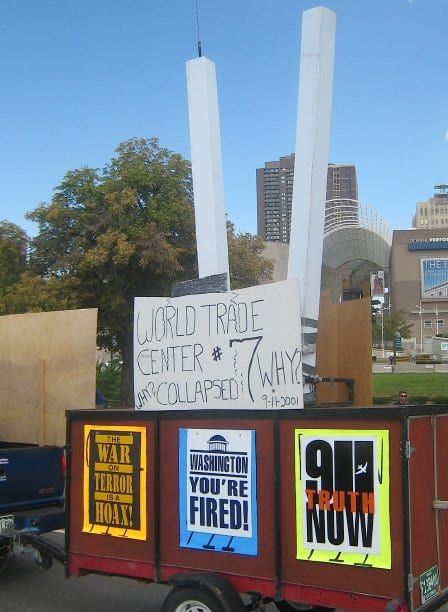 It doesn’t matter how many times their conspiracy theories are debunked (such as WTC Building 7, as shown here); they just plow forward and keep believing, facts be damned. 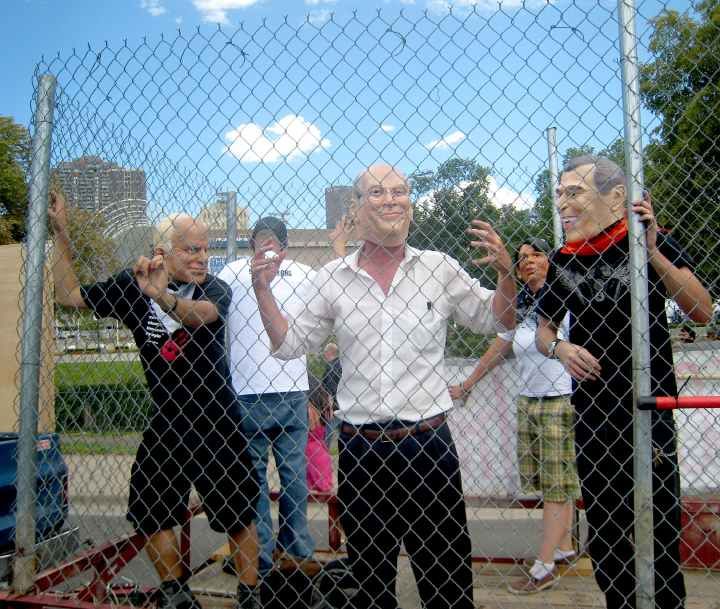 The usual cast of governmental villains were imprisoned in “God’s Gitmo,” which I suppose is the modern term for “Hell.” 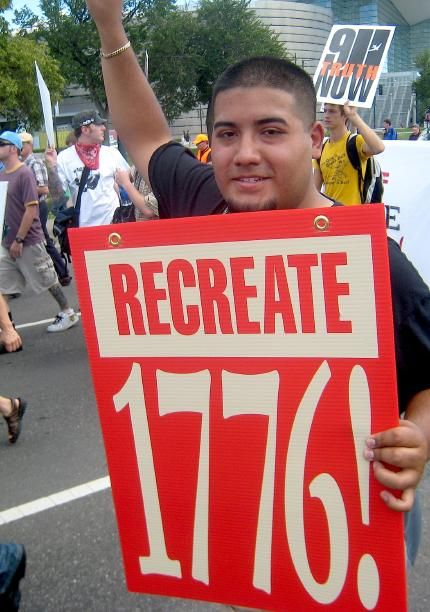 This was an interesting riff on “Recreate 68.” It seems the truthers want nothing less than to overthrow our government in a total political revolution. 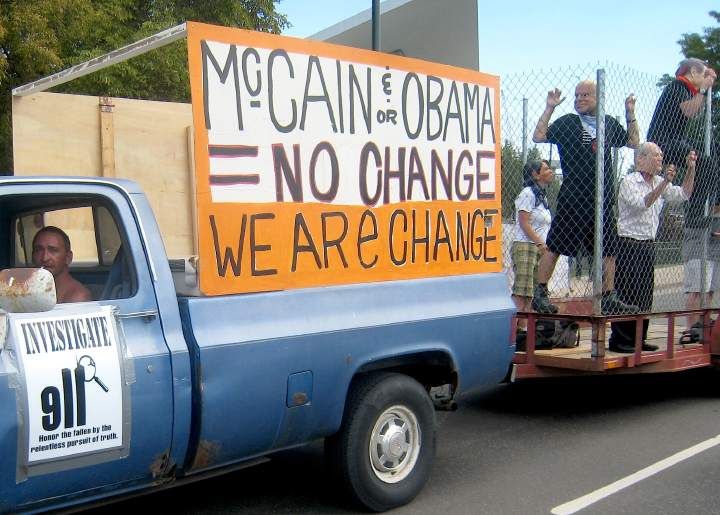 Here’s the We Are Change truck. They reject Obama and McCain, because they’re obviously both in on the Big Lie. 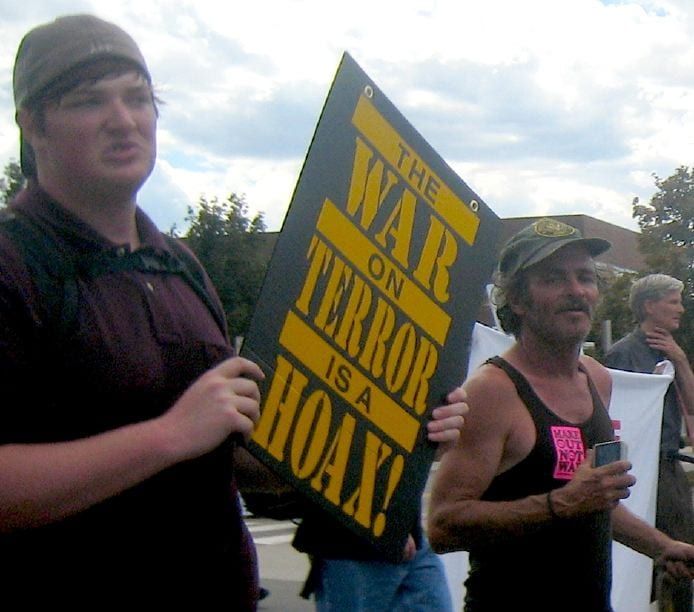 The War on Terror is a … hoax? You mean, I don’t have to wait in line at the airport? Alright! 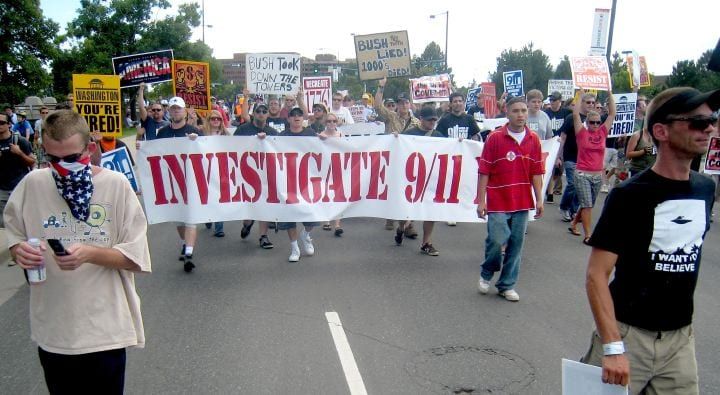 Masked faces, UFO buffs — that about sums things up.