Recreate 68 scheduled a “major” protest for “prisoners’ rights” on Monday afternoon. The event seriously fizzled, with perhaps 200 protesters at most. The march ended outside the Federal Courthouse in downtown Denver. 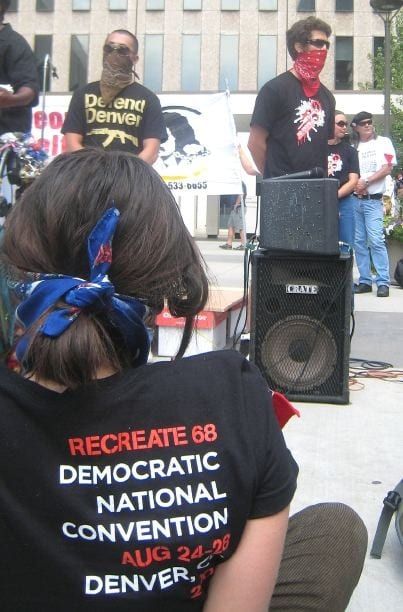 Here, a Recreate 68 devotee watches two masked wannabe terror boys “guard” one of the speakers (out of the frame off to the left). Notice radical firebrand and fake Indian Ward Churchill in the background. 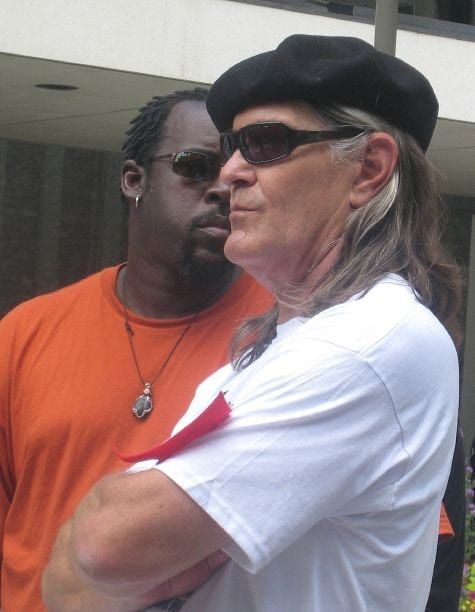 Here he is up close, in his typical off-putting pose. 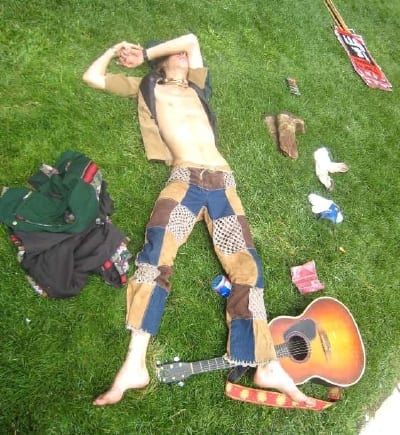 Sometimes, even a feeble, flopped protest can take all the energy out of you. 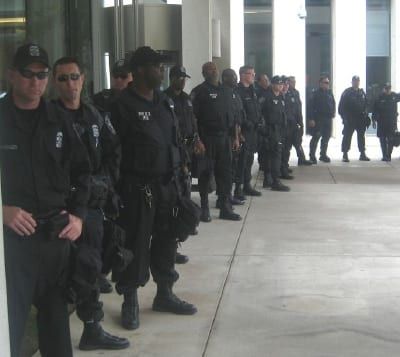 In the protesters’ fantasy world, they were going to assault or invade the courthouse in some way, but several massive contingents of police guarded every entrance. In fact, overall, the police outnumbered the protesters.

Although the Democratic National Convention doesn’t start until today, Monday, August 25, the protests against the convention started the day before on Sunday.

The PJM/LGF/zombietime photo team had not yet arrived in Denver, but luckily fellow photojournalist and LGF/zombietime stringer “El Marco” was on hand to record the day’s goings-on.

(For this one report, all the photos are courtesy of El Marco; captions and layout are by zombie.) 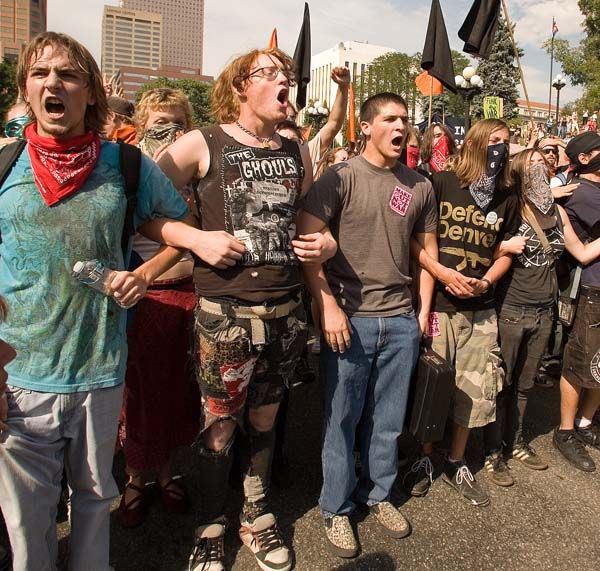 The day’s theme was “End the Occupations” (yes, that’s occupations with an “s,” since anything the US does counts as an “occupation”). Recreate 68 — the organization formed specifically to protest this convention, using as their guiding principle a desire to recreate the riots outside the notorious Democratic National Convention in Chicago in 1968 — were the primary instigators, with various radical, anarchist and left-wing groups joining in. Later in the day was a more loosely organized “Reclaim the Streets” protest (shown here) which basically entailed anarchists confronting the police for the sake of confronting the police. 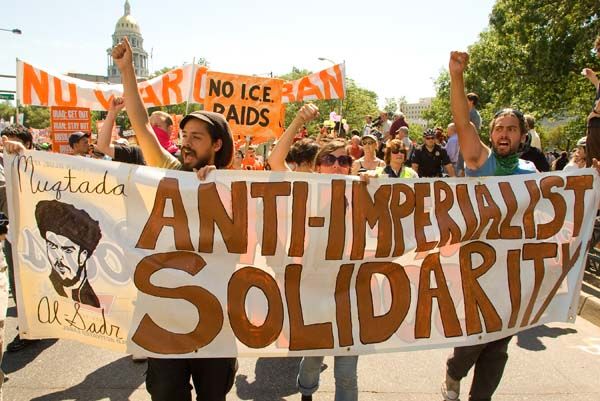 A banner from the “End the Occupations March.” It is truly astounding that people can openly support Muqtada al-Sadr (depicted on the left of this banner), the hard-line Shi-ite religious leader, especially in light of recent revelations that his “Mehdi Army” operated a torture chamber inside a mosque and routinely executed people. Keep in mind that these are the same kinds of protesters who endlessly whine about Abu Ghraib. If opposing and defeating people like al-Sadr’s torturers counts as “imperialism,” I’ll take imperialism any day. 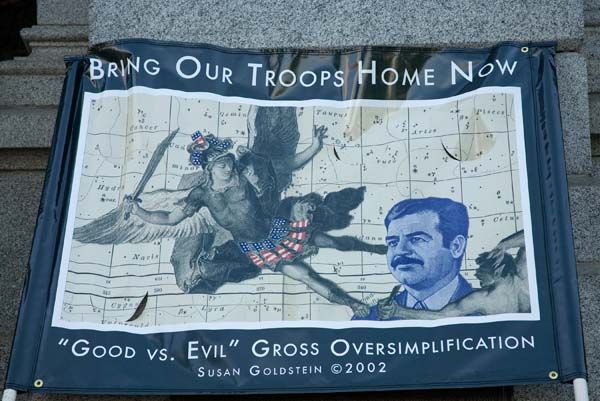 The march kicked off with a rally in front of the Colorado State Capital, with various left-wing celebrities such as Cindy Sheehan, Ward Churchill and Cynthia McKinney speaking while standing next to this banner, which purports to merely make a case for moral equivalence (bad enough), but which is actually pretty obviously anti-US and pro-Saddam. 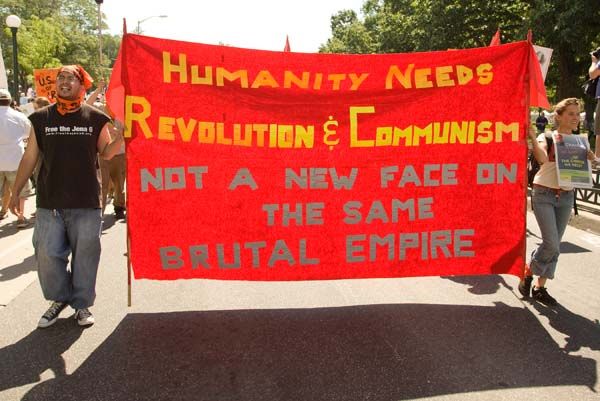 Yes, Virginia, there really are communists in this day and age. And most of them seem to have convened in Denver, as this banner from the “End the Occupations” march attests. 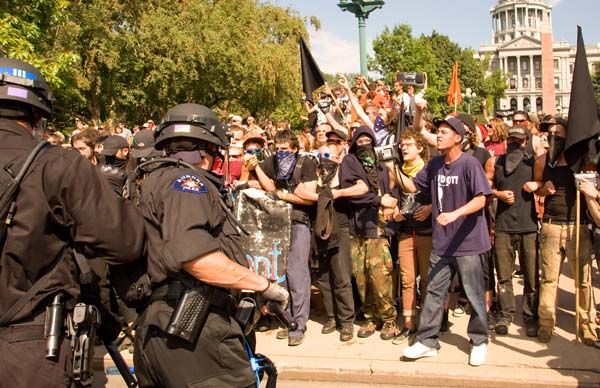 Later in the day, the Reclaim the Streets protest arrived at the state capital, where a series of heated but essentially fruitless confrontations between the protesters and the police ensued. 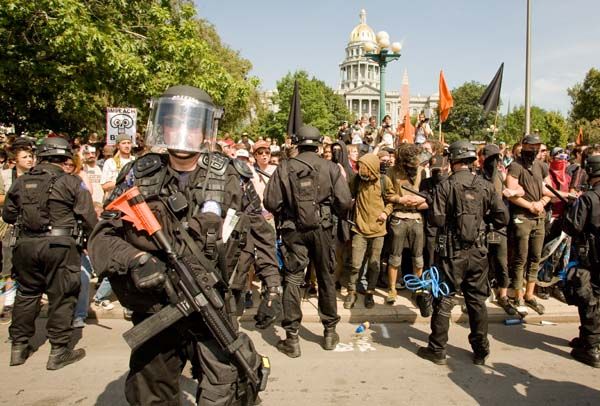 The police did their best to try and keep a lid on the proceedings. 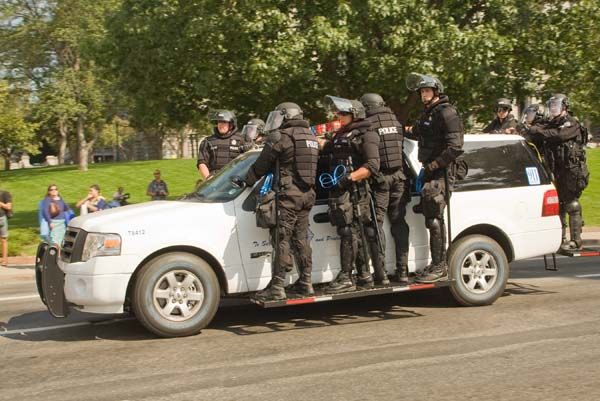 When they needed to rapidly reposition themselves at the protest, they hopped on these specially modified “troop transport” SUVs. 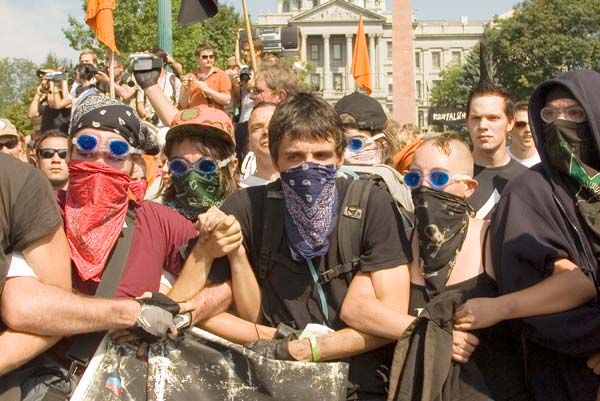 Wait — is this a protest, or a fashion show? 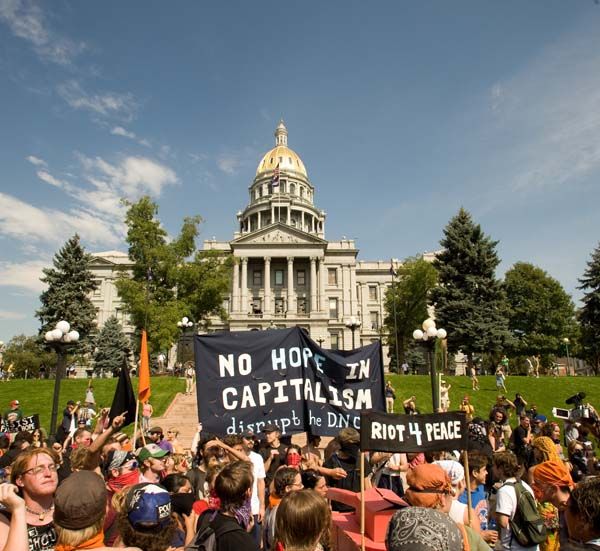 The communists shown in the earlier picture protested against capitalism as a concept. And here we the see the anarchists doing the same. This is in fact their only point of agreement: otherwise, the communists want to institute total state control of society, whereas as the anarchists want, well, anarchy. But hatred of the United States makes strange bedfellows, and for now the natural enemies — communists and anarchists — seem to have set aside their differences and agreed to bring down capitalism together. 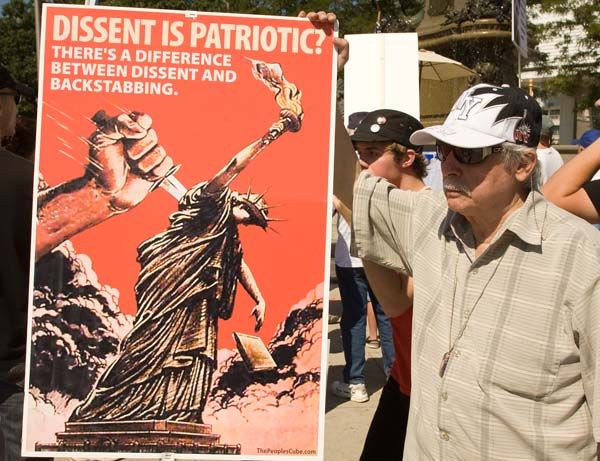 Shades of what is likely to happen throughout the week: counter-protesters showed up to voice their opinions as well. 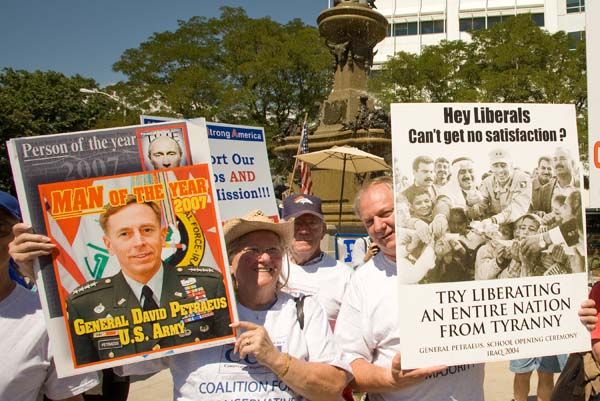 I just love the sign on the right: “Hey Liberals: Can’t get no satisfaction? Try liberating an entire nation from tyranny.” Ouch — that’s gotta sting. 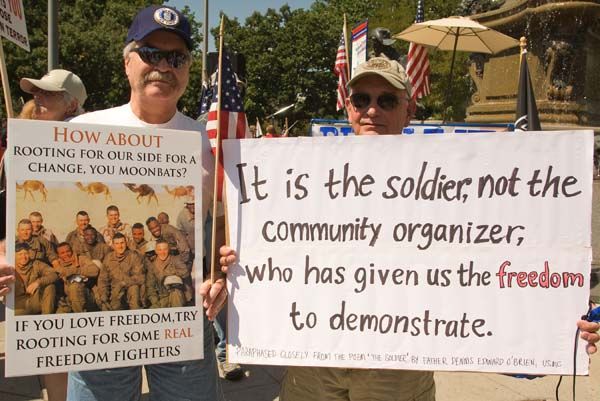 I must say, the messages put forth at this counter-protest were extremely astute, and highlighted the greatest weaknesses in the left-wing protest philosophy.

That’s it for our first report! Thanks to El Marco for capturing some excellent images while we were still en route to Colorado.

The convention itself kicks off today, and the protests are sure to escalate. Stay tuned!