Israel Will Stop Iran From Getting Nukes, Expert Says 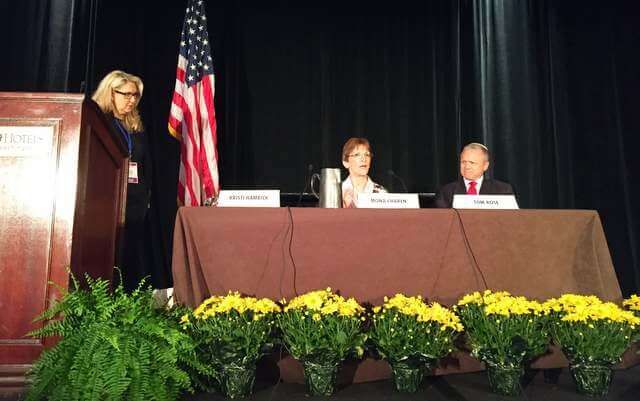 WASHINGTON – Despite the Iran deal, the Islamic Republic in Tehran will not complete its nuclear arsenal because Israel will attack and defeat them, predicted Jewish spokesman Tom Rose at the Family Research Council’s 10th annual Values Voter Summit on Saturday.

“Can I tell you a secret? Iran is not going nuclear — it won’t happen. Israel will not allow it to happen,” Rose, an XM Satellite Radio host and former CEO of the Jerusalem Post, predicted. “War is coming. There’s no doubt about that.”

Rose joined Mona Charen, a syndicated columnist and senior fellow at the Ethics & Public Policy Center, to discuss the irreconcilable differences between Israel and Iran. Both attacked the Iran deal, and both presented the Islamic Republic as a dire threat to the Jewish state and the United States of America.

The Current Plight of Israel

Rose compared the present Jewish struggle to the threat of the Nazis in 1940, and concluded that in some key ways, today’s situation is worse.

“Today, the Jewish state faces a threat of annihilation no less genocidal than the Jews of Europe faced three quarters of a century ago,” Rose declared. “Ponder this: Adolf Hitler, may his name be forever removed from our memory, never openly proclaimed his goal of exterminating the Jewish people — today’s enemy does.”

Hitler never held “death to America” rallies before the United States entered the war, Rose added, while Iran holds them “every week.”

“Seventy-five years ago, the world dismissed Adolf Hitler as the Jews’ problem. Today, the world dismisses Iran as Israel’s problem,” Rose declared. He added that while Britain and America defeated the Nazis before they could obtain nuclear weapons, the Iran deal makes it far more likely that Iran will develop nuclear capability.

Nevertheless, there are key differences between 2015 and 1940, Rose noted. “Today, the Jewish people are not powerless, we are not voiceless, and we are not friendless.”

“The state of Israel means never again will we be unable to defend ourselves or speak for ourselves,” Rose declared. He argued that the Jewish state enables the Hebrew people to take control of their fate and not be slaves to circumstance. “That we will be coauthors, together with God Almighty, of our own destiny!”

The Nature of the Islamic Republic

While Rose focused on the plight of Israel, policy expert Mona Charen attacked the recent deal with Iran. This capitulation on behalf of the United States, she argued, has shown that the Democratic Party is unfit to rule and empowered an outspoken enemy to both the U.S. and Israel.

Charen compared modern-day Iran to the Soviet Union during the Cold War. “The Soviets were behind every peace movement you could think of — they had the World Peace Council and the International Institute for Peace — Soviet leaders in the late 1970s and ’80s said all they wanted was peaceful coexistence with the West,” even while they plotted to defeat America.

Iran, however, does not even put up the charade. “There’s no disingenuous talk about coexistence — ‘death to America’ is their motto,” Charen explained.

She continued by saying that no regime has been as diligent in attacking America as Iran since 1979. She listed the American hostages the Islamic Republic took that year, the bombing of American barracks in Beirut and our embassy in Kuwait in later years, and the recent reports that attacks from explosive devices built and distributed by Iran accounted for up to a quarter of our casualties in the Iraq War.

Charen also mentioned Iran’s connection with al-Qaeda and its contribution to the refugee crisis by backing Syrian President Assad. She even alleged that the Shi’ite Islamic Republic is partially responsible for the growth of the Islamic State (ISIS), causing so much fear in the Sunni population that many of them joined the radical Sunni ISIS.

The Making of a Threat — A Catastrophic “Deal”

“This is the regime that the Obama Democrats will now enrich, grant international legitimacy to and invite to monitor its own nuclear facilities,” Charen declared. “This is beyond naiveté — it is sheer lunacy.”

Charen alleged that “Democrats have rejected the insight of Ronald Reagan, Margaret Thatcher and others that the surest way to prevent war is peace through strength.” She attacked Obama’s speeches on the Iran deal, which praise the treaty as a step to diplomacy and peace with a non-nuclear Iran, as disingenuous.

“We are deep into Orwellian territory now — war is peace, ignorance is strength,” Charen declared. “Iran’s President Hassan Rouhani was more accurate about the deal — he said Iran had achieved all its objectives and the U.S. none.”

Charen summed up the deal in one damning phrase: “permission masquerading as prevention.”

The reason Iran came to the negotiating table at all was that “the sanctions had so harmed their economy” that the U.S. was forcing the country’s leaders to choose “between becoming a nuclear weapons state and feeding its people.” Following this deal, however, “that leverage is gone and it cannot be recaptured.”

As part of the deal, the most important sanctions will be lifted immediately, Charen explained, “handing the world’s chief sponsor of terror at least a $100 billion windfall immediately.” In 12 to 15 years, she predicted, “Iran will be immensely wealthier, better armed and more powerful than it is today.”

Obama insisted that this “diplomacy” was the only alternative to war, but Charen exposed that as a false choice. America’s president could have left the negotiating table at any time, granted fewer concessions or even refrained from calling those who oppose the deal “warmongers.”

“Every school child knows that diplomacy without a credible threat of force is a nullity,” the policy expert said. Without a threat of attack, if the agreement is broken, a country lacks the ability to enforce a treaty. This greatly reduces any bargaining power. Charen quoted Prussian king Frederick the Great: “Diplomacy without arms is like music without instruments.”

With this deal, she concluded, “the Democratic Party has forfeited any claim to national leadership.”

Charen quoted Irving Kristol, saying: “When you look at the voting record of American Jews, it should disabuse anyone of this rumor that Jews supposedly have above average IQs.” The line got quite a bit of laughter, but it brought up an important question about modern politics.

If this deal, and Democratic politics in general, is so dangerous for America and for the Jewish state, why do American Jews support the Democratic Party? Charen explained that most Jews today have liberal voting records because they have liberal lifestyles.

“Jews tend to be highly secular, highly urban and highly educated — if you didn’t know anything else about them, those three things would be enough to put them in the Democratic column,” the policy expert said. Nevertheless, the observant Jews — the Orthodox, Modern Orthodox and those who attend synagogue regularly — tend to vote Republican.

Orthodox Jews make up only 10 percent of the Jewish population for now, but there are signs that this is changing, Charen continued. The children of secular, urban educated Jews tend to marry outside the faith, she explained. The grandchildren of secular Jews are often not Jews.

“The complexion of American Judaism is going to change — it’s getting more religious,” she said. “If you look at New York City, 74 percent of the Jewish children are Orthodox, and a lot of them go to Jewish day schools and are likely to vote Republican.”