2013: The Year To Strike a Blow Against Climate Alarmism

For too long, scientists who promote the hypothesis that man’s carbon dioxide (CO2) emissions are causing dangerous global warming have been given a free ride by politicians and the press. Their pronouncements, no matter how fantastic, are accepted without question and repeated ad nauseam by compliant governments and reporters alike. When scientists do what all scientists are supposed to do — question and probe — they are treated as enemies of the people and condemned by opinion leaders.

With the upcoming release of the latest UN Intergovernmental Panel on Climate Change report, 2013 can be the year governments and media grow up on climate change.

Treat catastrophists who push for climate and energy policies that would bankrupt us just as we do other end-of-the-world cultists: demand they prove their beliefs before providing them the time of day, let alone our tax dollars. Insist that climate catastrophists cease with their speculations and instead employ the scientific method.

This involves creating hypotheses based on predefined assumptions. Other scientists, in their proper roles as skeptics, challenge the hypothesis by testing the assumptions. They try to disprove — or as philosopher Karl Popper explained, falsify — the assumptions. Popper’s doctrine of falsifiability: “Our belief in any particular natural law cannot have a safer basis than our unsuccessful critical attempts to refute it.”

This part of the scientific method has not been applied to the anthropogenic global warming (AGW) hypothesis, and it is costing us plenty: literally hundreds of billions of dollars per year, the loss of thousands of jobs, and the rapid destruction of our most reliable and least expensive power source — coal-fired electricity.

The problems started when proponents of the AGW hypothesis, mainly the United Nations’ Intergovernmental Panel on Climate Change (IPCC), abandoned the scientific method and set out to prove the hypothesis because of a political agenda. They ignored or rejected contradictory evidence, no matter how convincing, and attacked those who tried to disprove the hypothesis. They produced false, imaginary, or concocted ideas and data instead of considering limitations and errors in their work.

This is well illustrated by their failure to properly consider the null hypothesis that global temperatures will not rise appreciably because of CO2 emissions from industrial activity.

Environmental fundamentalists knew that weakening the developed world by cutting off the fuel supply would be met with howls of protest, so politicians have not dared try this, at least not overtly. But an engine may also be stopped by choking off the exhaust, and so extremists worked hard to demonize CO2, the principle byproduct of civilization.

They ignored the benefits of the gas, such as its role in sustaining life. Instead, they labeled CO2 a pollutant and a harmful substance because of its supposed impact on climate.

Activists then succeeded in convincing governments to add the benign gas to lists of toxic substances to be controlled through regulations. This has allowed both the American and Canadian governments to bypass our elected representatives and, through the Environmental Protection Agency and Environment Canada, impose expensive but useless regulations on CO2.

The most effective strategy for fighting climatism — the label given to the climate scare by author Steve Goreham of the American Climate Science Coalition — is public education. Once enough citizens understand that the science, the foundation of the alarm, is hopelessly flawed, support for expensive and futile government action to “stop climate change” will quickly wither.

Here is what the public needs to learn quickly if we are to avoid further damage to our societies.

CO2 is one of three major so-called greenhouse gases (GHG); the others are water vapor (H2O) and methane (CH4). The problem initially faced by extremists bent on tainting CO2 is that the gas is less than 4% of all greenhouse gases in the atmosphere. Water vapor is typically 95% of the total. Their solution was to argue that CO2 is a far more effective GHG.

Trouble is, we don’t know how much more effective, so activists created a phony term — “climate sensitivity” — and spoke about it as if it were high at today’s CO2 levels, now approaching 0.04% of the atmosphere.

In reality, the impact of increasing CO2 is analogous to putting coats of black paint on a window. The first coat of paint blocks most of the light from passing through the window. A second coat reduces light only fractionally more, and further coats accomplish even less. 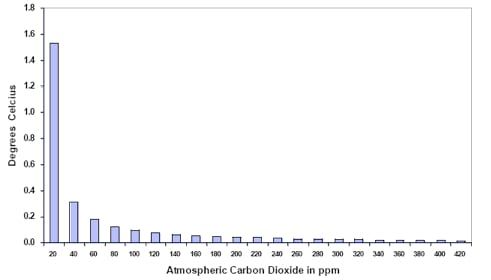 From the University of Chicago MODTRAN facility. The degree to which increasing CO2 levels affect temperature drops rapidly as CO2 concentration rises. In other words, climate sensitivity decreases with increasing concentration, until, at today’s level of nearly 400 parts per million, climate sensitivity approaches zero. Note that the first 20 ppm of CO2 has a greater temperature effect than the next 400 ppm combined.

The same is true of the impact of CO2 on the atmosphere. Research shows that the temperature’s sensitivity to increasing CO2 is now close to zero. In other words, from a temperature perspective the atmosphere is nearly saturated with CO2.

Instead of withdrawing the AGW hypothesis — since the assumptions on which it is based have failed — the IPCC cites a positive feedback to enhance the CO2 effect. As temperatures rise, even marginally, they say, more water evaporates, which acts to raise temperatures further, causing more water to evaporate and so on, bringing catastrophe upon us. But underplayed by alarmists is the cooling influence of increasing cloud cover that would occur as the atmosphere’s water vapor content rises.

The AGW hypothesis is not supported by empirical evidence, either. Measurements taken from Antarctic ice cores show CO2 rise tends to occur centuries after temperature rise, not before it, so it could not possibly have caused the onset of warming.

The hypothesis also fails between 1940 and 1980, when human-produced CO2 rose quickly after World War II yet global temperatures declined; fears of a coming glacial period dominated. Catastrophists blame the increase in sulphates from industry for reducing sunlight, therefore causing cooling. But they ignore the fact that temperatures rose after 1980 with no decrease in sulphate levels.

Today, during a period of rapid CO2 rise from the industrialization of India and China, we have had 16 years with no overall planetary warming.

None of this bothers catastrophists, of course. Ignoring real-world observations, they simply make up science to fit their worldview, programming their computer models to show warming when CO2 rises. To magnify make-believe AGW trends, they even lowered early temperature data to steepen the slope. And so, not surprisingly, even their least sensational climate models forecast more warming than actually occurs.

The IPCC is now putting the finishing touches on their Fifth Assessment Report (AR5), the most important part of which — the Working Group I report, “The Physical Science Basis” — will be released in mid-September. We know it will be yet more climate catastrophism, because on December 14, 2012, the second order draft was leaked. It included the assertion that CO2’s “relative contribution has further increased since the 1980s and by far outweighs the contributions from natural drivers.”

This is only true because they do not properly consider “natural drivers” far more significant than CO2, such as changes in ocean currents and the output of the sun.

Priming the public to continue to uncritically accept the AGW hypothesis is essential if AR5 is to help keep the global warming scare alive. Consequently, we can expect media and government climate propaganda to intensify over the coming months.

Citizens who care about the future of their countries must stop pampering climate catastrophists in 2013. We must take every opportunity to contest alarmism and to help end the most expensive scandal in the history of science.