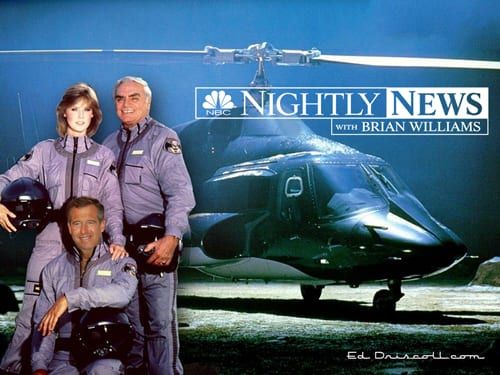 Everyone who cares about the future of this nation should hope that Brian Williams stays on as NBC’s Nightly News anchor.

Williams has finally been called out for his false Iraq War-related story going back a dozen years. He has admitted, contrary to several accounts he had previously given to others, to not being aboard a helicopter that was hit by a rocket-propelled grenade when he was in Iraq in 2003.

Rather than genuinely come clean, Williams’ on-air “apology” Wednesday night gave viewers the impression that he had only made a one-time “mistake” in relaying his fabricated story. Additionally, during that mini-mea culpa, he continued to exaggerate how close he ever was to any kind of danger, and very dubiously claimed that he “spent two harrowing nights in a sandstorm in the Iraq desert.”

A timeline at Stars and Stripes shows how Williams’ whopper began, and how, like the proverbial fish story, it grew and grew:

The indispensable Kristinn Taylor at Gateway Pundit has found that “speech promotional bios touted Williams’ bravery in returning to Iraq after he claimed being under fire.” The exhibit at his post touts the anchor’s commencement speech at Fordham University in 2011. Shortly after Taylor’s post, Fordham revised the related web page, adding a note that “on Feb. 4, 2015, Brian Williams issued an on-air retraction regarding the helicopter flight.” Quite a few people at other sites will be similarly busy scrubbing their web pages in the coming days.

Before telling Letterman the helicopter story, Williams makes the caveat that he’s not much of a war correspondent. He cites NBC News foreign correspondent Richard Engel as the kind of reporter who calls a day where he’s shot at “Tuesday.” There’s your motive, for anyone trying to understand why he would do this. He’s an anchor, sitting behind a desk most nights in New York City. It is embarrassing for a man to not have any good war stories or stories of bravery. So Williams took the story of how he was about an hour away from life-and-death drama and changed it. Unfortunately for him, that’s also called “lying.”

Also, in early 2003, though he had been chosen to succeed Tom Brokaw, Williams was not yet perched in the Nightly News anchor chair. There were barely concealed concerns that Williams, whose primary previous duties were at CNBC and MSNBC when the latter at least pretended to be objective, would not prove to be a strong enough presence. The 2003 incident, as embellished even then, surely boosted Williams’ perceived testosterone level at an arguably important time.

The calls for Williams’ resignation or firing have become numerous. Ominously for the NBC anchor, they are beginning to cross the ideological divide. In what can only be seen as a development second-worst in seriousness to the kiss of death itself, Dan Rather, whose decade-ago specialty was fabricating documents designed to prevent George W. Bush’s 2004 presidential election, has weighed in — supporting Williams as an “honest, decent man.”

It would be nice to see NBC resist sacking Williams as long as it can. That might be tough, because there is a report that “he had been counseled in the past by senior NBC News executives to stop telling the story in public.” How come, guys? What’s the problem? (Likely answer: Williams had at least a retired general and a cameraperson with him at the time, and one of them could have alerted execs to the anchor’s fabulist penchant.)

Americans’ confidence in the establishment press is at an all-time low. But it’s not low enough, even though the difference between newspapers and television news compared to Internet sources has virtually disappeared.

Brian Williams’ continued presence in the Nightly News anchor chair would henceforth make him the press’s poster child. He would become the starting point in any discussion of media bias with those who still believe that the press is fair and balanced — and readers can rest assured that Williams’ track record is a heavily documented, target-rich environment.

If the network continues to keep a serial fabricator on board, it will convince many of those who still buy what the press is selling that something is fundamentally wrong. That would be a fantastic development, because something is fundamentally wrong. The self-described watchdogs have instead become the left’s gatekeepers. The sooner everyone appreciates that, the better it will be for all.

Perhaps the 15-point head start Evan Thomas once boasted that press bias often gives Democratic Party political candidates in contested elections might begin to disappear. Legislative proposals might once again be discussed on their merits instead of being pre-judged favorably or unfavorably based on who is presenting them. The whole truth about the nation’s dire financial and economic circumstances, its outrageous cronyism and corruption, and the two-party, one-mindset elitists who run it, might finally penetrate the minds of everyday, non-news junky Americans.

We can always dream. Keep that dream alive, NBC. Keep Brian Williams right where he is.

Related: “Can NBC News Now Have Any Credibility With Brian Williams As Its Face?”, as spotted by Ed Driscoll.