It's Immigration Uber Alles at the Wall Street Journal 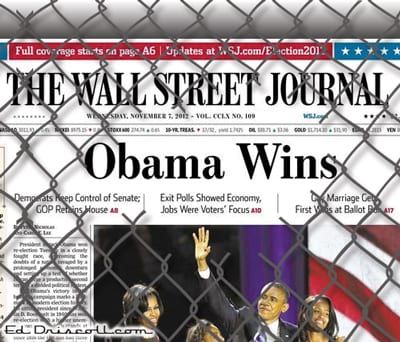 Immigration is the “climate change” of non-scientific political issues.

Proponents consider climate disruption — which I have for years preferred to call “globaloney” — to be “settled science.” No contrary evidence, such as the inconvenient fact that the planet hasn’t warmed and has perhaps even cooled for 19 years, can intrude on their computer model-driven fantasies. Some proponents, if they were to achieve the positions of power they covet, would jail so-called climate deniers faster than you can say “Climategate.”

The press shields ordinary people who have been slowly brainwashed into becoming globaloney sympathizers by decades of journalistic malfeasance from the movement’s virtual dominance by socialists and de facto Communists. Most of those in the polling pluralities who believe globaloney’s garbage are among those who would suffer the most economically if these wannabe tyrants ever get what they want.

Similarly, immigration advocates are utterly convinced that the overall benefit of granting amnesty to all who have come to this country illegally — committing what is still quaintly known as a crime the minute they cross the border — is a matter of settled political science. Mountains of evidence of the irrevocable harm such a move would cause fail to dent their illogic.

Most of those advocating amnesty also believe that whoever wants to come here for jobs related to science, technology, engineering and math (STEM) should be allowed to do so. That many STEM trainees going through federal jobs programs are hitting brick walls when trying to find employment, and that some currently employed Americans about to be laid off have been forced to train their shadily placed outsourced H-1B visa-holding replacements, is irrelevant.

No institution has been more persistently stubborn and utterly impervious to reality in its unfettered immigration advocacy, accurately characterized as immigration uber alles, than the Wall Street Journal.

In July 1984, the Journal advocated a new Constitutional amendment. It would simply read: “There shall be open borders.” It repeated its plea for such an amendment four additional times during the rest of the decade. Even though events during the 30 years since the first such editorial appeared have moved the Journal’s position from barely defensible to astonishly stupid, the paper has never officially backed away from it.

As an illegal-immigrant amnesty effort orchestrated by President George W. Bush and a Democrat-dominated Congress was underway in the summer of 2007, the Journal voluntarily published a video showing its white-dominated editorial board bashing anyone who opposed the effort as presumptively nativist and racist. These people genuinely thought this incredibly counterproductive video would help their cause, which fortunately went down in flames after the American people vocally, intensely and overwhelmingly objected.

In response to the wave of unaccompanied illegal-immigrant children pouring over our southern border during the past year — a flow which, oddly enough, has subsided temporarily in time for this year’s midterm elections — a July Journal editorial’s final paragraph was more worried about harm to their cause than anything else:

The larger tragedy of this episode is that it has done enormous and needless damage to the cause of immigration reform. The Obama Administration’s incompetence has again undermined its own agenda. But once the misery of the children is past, no one should think that illegal immigration can be stopped by more enforcement alone, by more Border Patrol agents or more harassment of American business. The way to reduce illegal immigration is by providing more work visas to enter—and leave—the U.S. legally.

The H-1B argument is an insult to every laid-off STEM worker in the country. As Alabama Senator Jeff Sessions said in a must-read floor speech on September 10:

… elected officials, activist groups, the ACLU, and global CEOs are openly working to deny American workers the immigration protections to which they are legally entitled.

… there is actually not a shortage but a surplus of Americans who have been trained in the STEM and IT fields and that this is why wages for these fields have not increased since 1999.

Well, there’s that, and the fact that dozens of tech companies secretly and illegally conspired to suppress their employees’ wages for five years.

The Journal has been beating the “we’ve tried enforcement, but it doesn’t work” drum for decades.  The editorial cited earlier claimed in an earlier paragraph that “America’s southern border is already far more under control than it was for most of the last 20 years.”

This is perhaps the most dangerous falsehood this usually sane bunch has pushed over the years. James O’Keefe proved in a recent video that he could cross the border wearing an Osama bin Laden mask and walk several miles to Interstate 10 without even a hint of Border Patrol scrutiny. Mexican drug cartels have had functional control of areas on our side of the border — for at least four years. Earlier this month, according to several ranchers in Texas, effectively confirmed by Congressman Jason Chaffetz, “four people known with terror ties to the Middle East, were allegedly caught sneaking over our southern border into the United States.”

Megyn Kelly at Fox News, who interviewed Chaffetz on September 17, noted that “the GAO (Government Accountability Office) has estimated there’s only a six percent operational control of this border.” What would the Journal say about a company which only achieved 6 percent of its revenue target during its most recent financial quarter? How would a member of its editorial board react if their home security provider said that the perimeter around their house was six percent secure?

The economic arguments supposedly favoring amnesty are complete fictions. A nation already on the path to financial ruin cannot afford the raids on Social Security and other entitlement programs which would ensue. Low-wage American worker can’t afford the sudden influx of millions of amnestied competitors. The huge minimum-wage increase the Obama administration seeks wouldn’t solve that problem, but would instead create a permanently unemployed and under-employed underclass.

The Wall Street Journal’s unrelenting, decades-long advocacy is having its desired effect. Republicans in Washington, egged on by the misguided “reform” fanatics at the U.S. Chamber of Commerce, are showing serious signs of caving. Nothing short of national ruin looms.