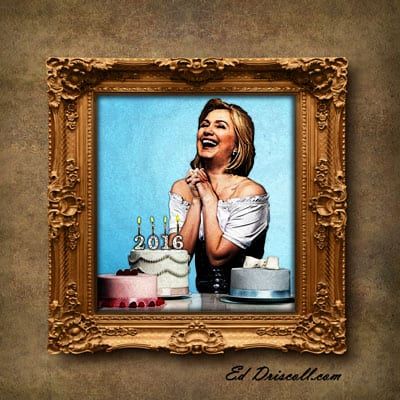 Recently uncovered information about what former Secretary of State Hillary Clinton demands from those to whom she deigns to speak tells us all we need to know about how “progressive” leaders and wannabes really view the rest of us. From President Obama on down, it’s clear that it’s not as their equals.

To be graced with her presence, Mrs. Clinton expects to be treated like a rock star, and arguably even better. In doing so, she has effectively appropriated the three-letter abbreviation “HHH,” once the exclusive property of 1968 presidential candidate and selflessly driven Democrat Hubert Horatio Humphrey, for herself — as Her Highness Hillary.

Public records obtained by the Las Vegas Review-Journal show that our 21st century HHH extraordinarily obligates those who run the events at which she delivers a contractually limited 90-minute address.

On the financial side, the events must, among other things, provide round-trip private jet transportation on “a Gulfstream 450 or larger jet.” The going rate for the use of a G450 is over $6,000 — per hour. She also requires “a presidential suite” for herself and three to five additional rooms for her staff. Mrs. Clinton has quite an entourage, including an advance team of two to scout the event site, as well as several travel aides. Naturally, she demands expensive room, board and perks for all of them. All of these expenses, and more, are over and above Her Highness’s $300,000 standard speaking fee, which was marked down to a rock-bottom $225K for the UNLV Foundation.

HHH’s controls over the proceedings, as described by the Review-Journal, are particularly galling. They include:

The UNLV Foundation’s defense for its expenditure and cave-ins on conditions is that Mrs. Clinton’s appearance is a money-making venture, with donors paying up to $20,000 for a table. The obvious question thus becomes what these donors, an apparent who’s who of Vegas business and politics, believe they’re getting for their substantial “investment” that they wouldn’t receive by simply cutting checks to the foundation to further its mission. Sadly, the answer appears to be the “opportunity” to get barely more than a fleeting glimpse of someone who somewhere, someday, might grant them a favor or cut them a break. What a racket.

By their actions, modern progressive leaders, despite all of their pieties about protecting the middle class and defending the downtrodden, betray a belief system which in their minds entitles them to live the high life at someone else’s expense.

It hasn’t always been that way, as a rundown of post-Depression Democratic Party presidents will demonstrate.

Franklin Delano Roosevelt was rich, and flaunted his wealth, but it was inherited. His status as a polio survivor “served the purpose of humanizing him for the masses.” Harry Truman “was so poor upon his return to Missouri that he had to move into his mother-in-law’s house.” John F. Kennedy also relied on inherited wealth, and vacationed at his own place; it was during the “Camelot” presidency that the first hints of the press’s and public’s fascination with the trappings of presidential power became evident. Lyndon Baines Johnson and Jimmy Carter deferred that urge during their time in office. LBJ usually vacationed at his ranch. Carter, for all of his considerable faults, including how he “faked carrying his own luggage” when in public view on trips, mostly imitated Johnson, and for the most part hasn’t cynically capitalized on his fame since he left the White House.

This brings us to the Clintons. While Bill was in office, his administration actually commissioned a poll to find out where people thought they should take their vacation. Although it is said that he took only 28 vacation days, his presidency marked when supposedly official trips came off as vacation-like. The lists of accompanying apparatchiks grew, and related costs reached levels never previously seen.

Bill Clinton has cashed in after his presidency as no other former White House occupant ever has. As of May of last year, his total take in speaking fees since leaving behind a spree of questionable pardons in January 2001 — with, apparently like Her Highness, all other expenses paid — was $106 million. Again, one must question what people believe they are getting for their money when they see Clinton speak. Do they believe that it’s their duty to ensure that the guy who beat the system after being impeached gets to live a rich and famous lifestyle? If so, how twisted is that?

If a vacation is defined as doing what one prefers to do to avoid what one should be doing, Barack Obama is the all-time presidential vacation champion. Beyond his supposedly unimpressive 125 days of official vacation and his 192 rounds of golf (as of the morning of August 25), he had spoken at nearly 400 fundraisers through mid-July. It’s quite obvious that Obama enjoys fundraisers; no president in U.S. history has been so enamored of hearing his own voice. Meanwhile, wife Michelle and now even the couple’s children have proven quite adept at running up their own outrageous vacation tabs at taxpayers’ expense.

No one should doubt that modern leftists like Her Highness Hillary and the Obamas believe that they are our betters, and that they richly deserve every dime they can extract for personal benefit from their subjects. These are not the kind of people our Founders had in mind when they designed a system they hoped would hold greedy, self-righteous hypocrites and their grifters in check. If we let such people control it much longer, that system will soon exist in name only.