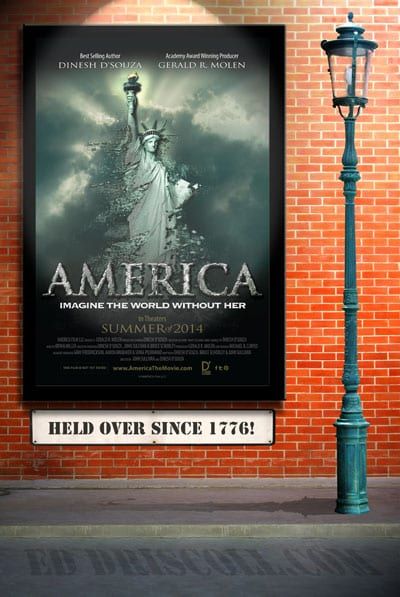 Sunday evening, I ventured to a local theater to see Dinesh D’Souza’s America: Imagine the World Without Her.

It is an outstanding effort by a man who clearly loves his country and is deeply concerned that everything unique about it is slipping away — to the detriment of the entire world.

D’Souza correctly calls out and identifies the pieces of an orchestrated, five-front attack by those who wish to remake these United States. To do so, they must first convince enough of us to disregard and denigrate this nation’s accomplishments and its exceptional and unprecedented contributions to human well-being and dignity. That campaign, much of it embodied in Howard Zinn’s execrable textbook, A People’s History of the United States: 1492 to Present, a publication scandalously used in thousands of schools, is an attempt to shame each and every one of us into stifling our patriotic instincts, forgetting our national pride, and memory-holing any positive elements of this country’s founding. D’Souza correctly notes that liberty’s enemies cannot accomplish their desired transformation without tearing down what is already present.

The following, while no substitute for seeing the movie, summarizes the five themes of the left’s attack. The rebuttals which follow are largely D’Souza’s, but some are mine — so you’ll have to go to the movie to see which is which.

We stole much of our land from the Indians. As seen in the title of Zinn’s book, the revisionists’ narrative goes back to Christopher Columbus — which is pathetic, given that Christopher Columbus never landed in the U.S. More substantively, Indian tribes were continually remaking the U.S. map by conquering and either driving out or enslaving other tribes — but our doing so, which did not involve genocide or enslavement, was apparently the only malign enterprise.

What horse manure. D’Souza notes that the Sioux have turned down a $1 billion reparations offer because they will settle for nothing less than getting “their” areas of the Upper Midwest back. Somehow, we’re supposed to ignore the fact that they took that land from other tribes. The Indians, like virtually the entire rest of the world, subscribed to the “conquest ethic.” The U.S. was among the first, if not the first, nation on earth not to automatically impose colonialism, tyranny or worse on those it defeated in war.

We stole half of Mexico. Actually, we conquered Mexico, gave half of it back, and made American citizens of everyone living in the American Southwest — something the conquest ethic-driven Mexicans under Santa Ana would never have dreamed of doing had they somehow turned the tables.

Slavery stole the labor and lives of Africans. Slavery is indeed this country’s original sin. But our Founders, who knew that they could not have formed a full union at the time of the Constitution’s adoption unless they allowed the practice to continue, nevertheless sowed the seeds for its destruction in the nation’s founding documents. No less than Frederick Douglass declared that the Constitution was hostile to slavery.

The abolitionists, including Abraham Lincoln, capitalized on this disconnect when they sensed that the nation’s moral compass could be moved. It was, but not until a horrible, four-year war — a war D’Souza says is the “first time in history” a war was fought to end slavery — took the lives of over 300,000 Union and over 200,000 Confederate soldiers. My opinion: The impossible task of “reparations,” if ever undertaken, would have to include payments to those who whose relatives died to end slavery, or it would be objectively unjust.

Our military adventures have been about plundering the world for its resources. For starters, if that were so, there would be no Japan Inc., Korean corporate giants like Samsung (MacArthur had to retake almost all of what is now South Korea, which had been lost to Communist troops), or independent German corporations. We would have taken those countries over and run their industries ourselves. Today, Iraq’s oil would exclusively be our province. None of this is the case.

Until Vietnam, which a left-dominated U.S. Congress deliberately chose to abandon before it could become self-sufficient and self-defending, the best thing that could happen to any country in the long run was to lose a war with or be successfully defended by the U.S.

Capitalism is theft. The left seems to understand that much of this core argument no longer works. That’s because capitalism obviously creates wealth where none formerly existed — it apparently required high-tech liberals to prove this obvious point beyond doubt — and continues to lift people out of subsistence-level lives around the world at an astonishing rate. Their backstop is the “you didn’t build that” argument made by the likes of President Barack Obama and Massachusetts Senator Elizabeth Warren. D’Souza reasonably asks, when businesses and their owners flourish, if they end up getting more in public benefits than those who don’t own or never built businesses. The answer, unless they engage in the cronyism game, is obviously “no.” So why should they be expected to hand over even more than the wildly disproportionate share they provide to fund public services?

D’Souza then moves to recent political history, particularly chronicling the influence of Saul “Rules For Radicals” (with an admiring nod to Lucifer) Alinsky. I wonder how many left-leaners might begin to question their beliefs if they realized that many of the strategies Alinsky developed arose from his acknowledged first-hand observations of the inner workings of the murderous Chicago mob?

Barack Obama and Hillary Clinton are indisputably disciples of Alinsky. Obama’s allegiance is plainly seen in his governance. Thus far, Hillary’s has been primarily visible in her college thesis, which proposed taking Alinsky to a new level. Then-Ms. Rodham believed that instead of radicals toiling as perpetual outsiders trying to coerce governments to do what they believe they should do, radicals needed to become the government.

Though I understand the limitations of time, this is where D’Souza fell down a bit. A friend who has seen the movie noted, and I agree, that many people leaving America will believe that “restoration,” D’Souza’s one-word theme for what genuine reform-minded Americans should be focusing on in the coming years, will be far more likely if Obama is somehow prevented from doing critical damage in his final years in office, and a Democrat, be it Mrs. Clinton or Lizzie Warren or anyone else, fails to win the White House in 2016. At best, that only slightly improves the odds.

In case anyone has missed it, a significant portion of the federal government’s bloated bureaucracy, whose interests have historically been job preservation and perpetuation, now sees its primary mission as carrying out the Alinsky agenda from within. Thousands of apparatchiks with the mindsets of Lois Lerner, Tom Perez, and Al Aremendariz pervade this government. There are no meaningful checks and balances on their actions and dictates. There never will be unless a massive downsizing of their size and influence takes place.

Recognizing current and future political dangers is important, and America does a great job of that. But it’s far from enough. We need a way out of the regulatory tyranny we see flexing its muscles virtually on a daily basis — and we need someone like D’Souza’s to cinematically expose its ugliness and suggest solutions.