5 Myths Propping Up the Obama Presidency 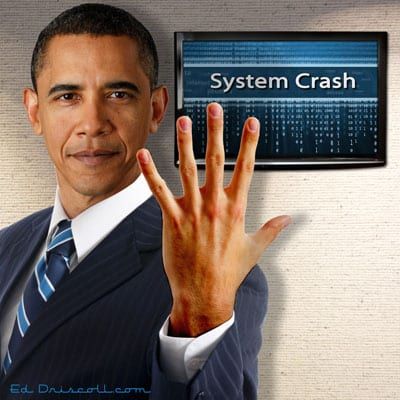 As 2014 begins, President Barack Obama’s approval rating is at its lowest point in his five-year tenure. Imagine where it would be if the establishment press treated him the way it did George W. Bush.

1. The economy has become strong, and is getting stronger.

Media reports have been calling recent job gains “robust.” Hardly. 2013’s estimated job growth of almost 2.4 million is still only 60 percent of what was achieved annually on a population-adjusted basis for a full six years during the 1980s. (See chart below.)

Job growth should be far greater, because there is still so much ground to make up from the disastrous POR (Pelosi-Obama-Reid) economy-driven recession of 2008-2009.

It’s bad enough that payroll employment is still 1.3 million below its January 2008 peak. It’s worse that employment in the Household Survey is 2 million shy of where it was in that same month. If we’re lucky and this plodding progress continues, it will have taken almost seven years for that more comprehensive measure of employment to return to where it was before the recession began — and several more years, if ever, before a recovery in employment catches up to eligible adult population growth.

Almost 40 percent of the reported economic growth during the first three quarters of 2013 came about because of inventory build-ups. Tentative results from the recent Christmas shopping season show that consumers haven’t been buying enough to significantly deplete those stockpiles. That does not bode well for production during the fourth quarter or early 2014.

2. The government’s finances have stabilized.

We’re supposed to be impressed that the Federal Reserve will only be creating $900 billion a year in funny money instead of $1.02 trillion. The truth remains, as outgoing Fed Chairman Ben Bernanke told Congress in July, that without this historically unprecedented level of artificial stimulus, “the economy would tank.”

The Fed’s decision to barely taper its stimulus to $75 billion per month from $85 billion is really a vote of no confidence in the government’s ability to survive on its own. Before the taper, the Fed was financing $540 billion, or about half, of the government’s annual trilion-dollar 2012 deficit (the rest goes into sopping up mortgage-backed securities). The taper only reduces that to $480 billion, which is about 80 percent of the government’s projected fiscal 2014 deficit. This means that Bernanke & Co., soon to be Janet Yellen & Co., believe that precious few others want to own additional Treasury securities. They are probably right.

3. Obamacare will work out.

Most of the impact of Obama’s “Lie of the Year,” better described as a five-year series of dozens of lies — that “if you like your insurance plan, doctor, medical provider, and drug regimen, you can keep them” — has yet to hit home.

We have no idea how many of Obamacare’s vaunted 2 million enrollees will actually pay their premiums.

We have no idea how many will game the system by paying a single month’s premium and then milking the system at insurers’ and providers’ expense for another 60-90 days, as regulations now permit.

We have no idea if the government will ever be able to build the infrastructure elements it from all appearances deliberately chose not to build, including but certainly not limited to a legitimately secure web site and a system for paying tax subsidies to insurance companies.

We have no idea whether several states, e.g., Iowa, Maryland, Oregon, and others, can recover from their own calamitous rollouts.

We have no idea what the extent of the government-caused — and I would argue, likely government-orchestrated — chaos will be once patients who believe they have enrolled and are covered show up at doctors’ offices and find out they aren’t.

Finally, we have no idea how big the health insurance industry’s shortfall will be once it begins paying out claims. That there will be a shortfall is a virtual certainty, because Obamacare’s enrollees have from all appearances been older and sicker than the general population, and the program has utterly failed to sign up healthy young people in sufficient numbers. Whatever the deficit is, I certainly hope that people who should know better stop calling it a “bailout” when the government has to reimburse the industry. Though they seriously erred in failing to fight the law before it was passed, this disaster is not their fault.

4. We’re running out of time to stop global warming.

Even though we’re at 17 years and counting of no net increase in global temperatures, the Environmental Protection Agency still acts as if warming is settled science, and silences any dissent against dogma. Companies are being driven out of business and workers are losing their jobs because “scientists” would rather rely on faulty computer models than look out their windows.

5. Our “smart diplomacy” is holding our enemies at bay.

The administration continues to slavishly adhere to a long list of naive ideas about foreign relations.

In the real world, Iran continues to make progress towards possessing nuclear weapons. North Korea continues its attempts to deliver such weapons. The situation in Iraq, the war we won in 2008, is decaying. China and Russia are clearly emboldened. The White House and Secretary of State John Kerry are either okay with all of this, or clueless. Meanwhile, our military is being depleted and demoralized.

It seems likely that by fall the public, despite the press’s best efforts to cover up and obfuscate what’s really happening, will figure out that two or more of these five myths are utter fictions. This will make congressional and senatorial elections especially dangerous endeavors for Democrats and leftists throughout the land. Just how dangerous depends on how aggressively the president’s opponents work to expose the truth and overcome their annoying go-along, get-along tendencies.