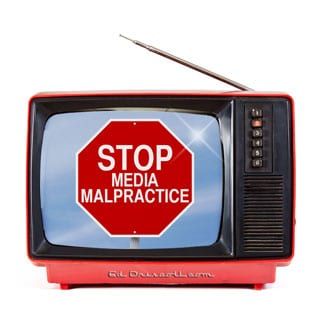 As the year ends, I see that others have already conscientiously compiled lists of the most underreported and misreported stories of the year, with some even breaking matters down between foreign and domestic.

With that task addressed, I thought it would be worthwhile to compile a far from comprehensive list of ten of the more noteworthy techniques which those who pretend to be loyal to the tenets of journalism employed during 2013 to deceive, misinform, misdirect and smear.

1. Pretend that “no one” is saying something, when they really are.

Carol Costello of CNN claimed in January that “no one is talking about overturning the Second Amendment or confiscating guns in America.”

In the three preceding weeks, New York Governor Andrew Cuomo had said that “confiscation could be an option”; an Iowa state representative had “said governments should start confiscating semi-automatic rifles and other firearms”; and Democratic Senator Dianne Feinstein of California had suggested a gun-buyback program which “could be compulsory.”

In early December, New York City’s police department sent out “letters telling gun owners to turn over their rifles and shotguns — or else face the consequences,” i.e., confiscation.

2. Bury the party affiliation of Democrats involved in scandal and crime.

One of the most notorious such examples last year involved Steven Brooks, a Nevada State Assembly member from North Las Vegas. The opening sentence at the related Las Vegas Sun story told readers that “a Democratic assemblyman is in jail, arrested for threatening Democratic Speaker-elect Marilyn Kirkpatrick, according to North Las Vegas Police and Democratic sources familiar with the situation.” By the time the Associated Press was done massaging it for national consumption, the D-word was held until the ninth paragraph, and reporter Martin Griffith was regaling readers with a list of the wonderful organizations and charities which Brooks had served.

When the government’s initial report on fourth-quarter 2012 economic growth showed contraction, the editors at Bloomberg News decided that the nation’s gross domestic product (GDP) is an “imperfect measure of progress,” and that we really should be looking at indicators of “social progress or human happiness.”

How convenient. Expect a recurrence of such nonsense if first-quarter data show that the no-growth, Obamacare Christmas I warned of in November materializes.

In February, the Associated Press, aka the Administration’s Press, was determined to show that government employment had steeply declined. Trouble is, it ignorantly and artificially pegged the “peak” at a point when hundreds of thousands of obviously temporary Census Bureau workers were on the federal payroll.

The truth is that government employment “grew by a ridiculous 1.2 million, or almost 6%,” from December 2003 to April 2009, and was long overdue for a correction.

5. Put on the moral blinders for leftists and horrible criminals.

While treating George Zimmerman as evil personified for defending himself against Trayvon Martin, the press was incredibly indulgent towards multiple baby-killer Kermit Gosnell, Venezuela’s Hugo Chavez, and China’s Mao Zedong.

AP reporter Maryclaire Dale described Gosnell as “an elegant man” who “smiled softly” in court as witnesses described his late-term abortion and infanticide house of horrors. The wire service rarely applied the “abortion” tag to its Gosnell stories, but frequently used “reproductive rights.”

The AP’s Paul Haven depicted the deceased Chavez’s funeral procession as “an epic farewell to a larger-than-life leader,” during which the authoritarian looter’s “flag-draped coffin floated over hundreds of thousands of supporters.”

Earlier this month, both CNBC and the New York Times ran headlines wishing the long-deceased “Chairman Mao,” who is responsible for the deaths of as many as 70 million during his multi-decade reign of terror, a “happy” 120th birthday.

6. Pretend that someone said something they never said.

Readers should always be on the alert for descriptions of what Republicans and conservatives allegedly “said” when quotation marks are absent.

In April, Politico’s Donovan Slack “reported” that House Speaker John Boehner had criticized “President Obama’s budget for failing to cut enough spending.” Boehner said no such thing. His press release merely noted that “it is time for Washington to deal with its spending problem.” Long-time budget watchers know that the left’s and the press’s dictionaries define a “cut” as a “reduction in projected spending increases.”

7. Act as if you’ve done your job when when you’re years late covering an important story.

If complete, this list would be exhaustive, and exhausting. Here are just a few examples:

8. Don’t believe our early reporting — and if you go looking for it, you won’t find it.

Though many news outlets irresponsibly send early news reports to the memory hole, the Times has become particular adept at the practice:

9. Ignore or make excuses for inconvenient remarks by leftists and Democrats.

Here’s another list which could go on for miles. A few of the worst offenders in 2013 include the following:

10. Sit on important information if doing so helps the administration.

In November, the AP’s Julie Pace reveled in the fact that she and her employer knew of secret negotiations between the U.S. and Iran a full eight months before they were publicly disclosed. The wire service’s claim that doing so involved doing the Obama administration no favors blew up in its face when another news organization acknowledged that it and AP “were asked to not publish til end of Iran talks.”

In 2014, the failures associated with President Obama’s “signature achievement” will become far more widely visible, and its negative economic effects will become more widely felt. Other aspects of his presidential stewardship are on track for similar decay. As a result, the likelihood that the left will suffer serious damage in the fall’s congressional elections will increase. As that occurs, look for the establishment press’s alleged journalists to make heavier use of the techniques discussed above and many others in an attempt to stop the bleeding.