The Fundamental Dishonesty of Obama and Obamacare 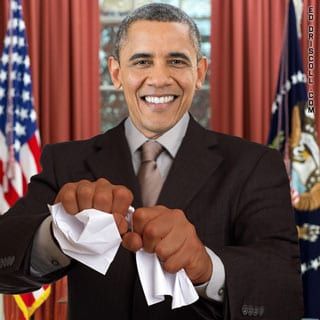 Wait, who said anything about “if you like your plan…”?

It’s hard to overstate how disconcerting the news about our government has been since Obamacare debuted on October 1st.

The HealthCare.gov rollout for consumers, utterly disastrous and demoralizing as it has been, is in the grand scheme a far-down-the-list annoyance. Its most beneficial result has been to teach Americans with their eyes even remotely open that our government has devolved to the point where it can’t carry out even the simplest of tasks.

Over a long weekend followed by some supplemental tweaking, the three guys who built the working Affordable Care Act policy search web site known as TheHealthSherpa.com for free accomplished what Health and Human Services Secretary Kathleen Sebelius’s assembled contractors and bureaucrats couldn’t get done with a 42-month head start and hundreds of millions of dollars.

Meanwhile, Team Sebelius’s work has been extraordinarily shoddy. Four IT experts told a congressional hearing this week that the currently not secure web site won’t be secure by the government’s self-imposed but increasingly squishy November 30 deadline. You would think in these circumstances that no one with a brain would suggest that users visit HealthCare.gov and attempt to enroll. You would be wrong. On Wednesday, Sebelius said that she “feels like it’s safe.” She “knows” it is not. A private firm executive allowing this travesty to continue for 50 days would be in jail, and his or her company would be shut down permanently.

Behind the curtain, things are far worse. With about 25 business days left before the provision of medical services is set to begin, what remains undone is downright terrifying.

We’re told that the problem with HealthCare.gov sending bad enrollment information to insurers, first reported five weeks ago but surely discovered just days after the site’s launch, is only “two-thirds” fixed.

On Tuesday, Centers for Medicare and Medicaid Services deputy chief information officer Henry Chao told a House hearing that “the back-office systems, the accounting systems, the payment systems, they still need be built.” Chao had plenty of chances to correct himself, and didn’t. It’s reasonable to believe, especially based on this administration’s track record, that Chao really said that work on these systems hasn’t even started.

Given one more chance to come clean with the American people on November 14th, Obama instead chose to perpetuate that myth (bolds are mine):

With respect to the pledge I made that if you like your plan, you can keep it, I think — and I’ve said in interviews — that there is no doubt that the way I put that forward unequivocally ended up not being accurate. It was not because of my intention not to deliver on that commitment and that promise. We put a grandfather clause into the law, but it was insufficient.

Keep in mind that the individual market accounts for 5 percent of the population. So when I said you can keep your health care, I’m looking at folks who’ve got employer-based health care …

Obama’s “5 percent” lowball estimate of the individual market is really eight percent. But it’s his statement about employer-based health care which officially and irretrievably takes his and his administration’s fundamental dishonesty to a new level.

Obama acted as if the projections of employer plan cancellations published in the Federal Register in June 2010 don’t exist. They do, and their midpoint estimate is that 51 percent of employer plans will not be grandfathered (i.e., they will have been cancelled) by the time the deferred employer mandate kicks in on January 1, 2015 (the low and high estimates are 39 percent to 69 percent, respectively).

At that point, employers will be forced to assess whether they can afford to replace them with Obamacare-approved plans containing the statist scheme’s minimum coverage standards and their accompanying massive cost increases. A far from insignificant number of them will choose not to replace their plans, and will end employee healthcare coverage entirely in the name of survival.

The Obama administration had over three years to do something about what the president claimed was an “insufficient” grandfathering clause, and did nothing. That’s because, despite his contention, they actually wanted to make grandfathering difficult. They have clearly been quite successful in achieving their goal. In a recent survey by the International Foundation of Employee Benefit Plans, only 27 percent of respondents reported that their plans still had grandfathered status.

It further turns out that last month, during the course of arguing its case supporting the Affordable Care Act’s religious freedom-violating contraception mandate, Department of Justice lawyers gave the June 2010 Federal Register grandfathering estimates legal credibility by filing a brief which specifically referred to them.

Obama’s November 14 statement was a transparent attempt to worm out of all of this by changing what he originally said. His promise wasn’t that “you can keep your health care”; it was that “you can keep your health care plan.” That’s not going to happen, for at the very least a significant plurality if not a majority of employees — and if you can’t keep your plan, there certainly isn’t any guarantee that you will be able to keep your doctor or other medical provider under its Obamacare replacement.

This is what happens when you put breathtaking incompetence together with patented progressive “whatever it takes” dishonesty. You get the Mother of All Failed Government Program Rollouts, the Mother of All Domestic Deceptions, and the Mother of All Presidential Failures, all in one petulant, defiant, punk package.

Blogger extraordinaire Patterico, reacting to separate allegations unrelated to Obamacare that the Census Bureau fabricated household surveys which ended up “cooking” the controversial September 2012 pre-election jobs report at the Bureau of Labor Statistics to the administration’s favor, summed up where we are perfectly with this bunch: “They’re not just lying about politics now. They’re lying about data. They’re lying about everything. All the time. Constantly.”

I don’t see how anyone can possibly disagree.