'Zeke the Bleak' at His Putrid Peak 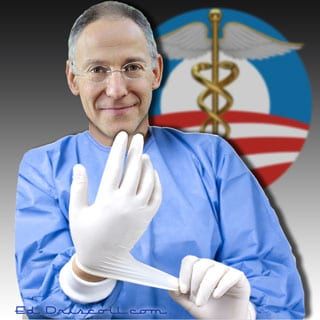 Though I expected Emanuel, described by Wallace as one of the law’s “architects,” to administer unhealthy doses of contempt for anyone who believes in freer markets, individual autonomy, and the truth, I didn’t expect him to morph into the obnoxious person who may be Obamacare opponents’ best recruiting tool. The best strategy for conservatives and libertarians seeking to more quickly build opposition to Obamacare, which has grown significantly in the 40 days Americans have been able to experience some of what’s really in it, may be to widely distribute the video of Emanuel’s offensive Fox performance and root for the doctor to continue to do weekly rounds with Wallace.

The Fox host identified Emanuel as one of Obamacare’s “architects.” For those who weren’t closely tuned in four years ago when Congress first began “considering” Obamacare — i.e., concocting thousands of pages of continually revised dense verbiage which no one read, let alone fully understood — Zeke Emanuel is also Dr. “Death Panels.”

It appears that Emanuel and his peeps have been furiously at work cleaning up his public persona in the four years since I called him “Zeke the Bleak” in a PJ Media column. With the exception of a feel-good book about growing up with his brother, former Obama chief of staff and now Chicago Mayor Rahm Emanuel, Zeke has until very recently been largely out of the public eye. Despite that, his Wikipedia entry now weighs in at well over 7,000 words, up from fewer than 2,000 in August 2009. A great deal of the additional Wiki verbiage attempts to convey the impression that Zeke really isn’t an advocate of life-threatening or life-shortening rationing regimes, and that his primary interest is reducing what he sees as the chronic “overutilization” of medical services in this country.

As a result of what he saw and heard from Emanuel and other fellow travelers during the early stages of Obamacare’s drafting in 2009, Nat Hentoff, the nationally renowned and left-leaning authority on the First Amendment and the Bill of Rights, wrote:

I was not intimidated during J. Edgar Hoover’s FBI hunt for reporters like me who criticized him. I railed against the Bush-Cheney war on the Bill of Rights without blinking. But now I am finally scared of a White House administration.

… Emanuel writes about rationing health care for older Americans that “allocation (of medical care) by age is not invidious discrimination.” (The Lancet, January 2009) He calls this form of rationing — which is fundamental to Obamacare goals — “the complete lives system.”

Four years of airbrushing by Emanuel and his online encyclopedia ghostwriters hasn’t changed his fundamental outlook, as evidenced in his failure to repudiate many of the damning things he has previously written, as well as in several of his statements on Sunday.

According to his Wikipedia entry, Emanuel has tried to explain away his Lancet work as follows:

… [T]he Complete Lives system was not meant to apply to health care in general, but only to a situation where “we don’t have enough organs for everybody who needs a transplant.”

In other words, it would apply in any system which has to resort to rationing. Venezuela already has it. The U.S. will eventually experience severe rationing if Obamacare ever takes full effect.

The “Bolivarian workers’ paradise” which is Sean Penn’s favorite country has actually gone one step further with transplants. They’re not happening at all, while cancer treatments have been sharply restricted:

Last month, the government suspended organ donations and transplants. At least 70 percent of radiotherapy machines … are now inoperable in a country with 19,000 cancer patients — meaning fewer than 5,000 can be treated.

People are dying in Venezuela, one of the most resource-rich countries in the world, because of state-run health care.

On Fox on Sunday, Emanuel, unsurprisingly for a guy who is a big fan of the word “communitarian,” virtually celebrated the impending end of the nation’s individual health insurance market, while claiming that insurance companies are the ones responsible for the millions of accompanying individual plan terminations. The fact is that Kathleen Sebelius’s mid-2010 restrictions on which individual plans could be grandfathered have disqualified so many plans that the insurance industry’s main players will likely decide that what remains of the market won’t justify its continuation. Obamacare is to blame for that, not the insurance companies.

Emanuel also absolved Obamacare of any responsibility for the wave of part-time employer-sponsored health coverage terminations at companies like Walgreens and Kmart, claiming that these companies made decisions to move these employees to private exchanges completely on their own. Wrong again, Zeke. Obamacare has made the cost of covering such employees so prohibitive that these companies had to take the actions they did to control costs and remain competitive. Emanuel’s contention is the same as a government saying, after suddenly starting to charge people $1,000 to cross a bridge over a river, that it had nothing to do with everyone’s decision to swim across instead.

Most crucially, Emanuel ridiculously claimed that Obamacare’s plans are better and far preferable to “low insurance” which has supposedly caused “cost shifting” to patients with better coverage. He’s got to be kidding. The low reimbursement rate regimes of Medicaid and Medicare, the government’s core programs, are far and away the largest sources of cost shifting, while Obamacare’s plans have been shown to have worse coverage and higher costs than many of the terminated individual plans.

Emanuel’s appearance came the day before Obama’s infamous attempt to revise his “if you like your health care plan, you can keep your plan, period” guarantee by adding “if it hasn’t changed since the law was passed.” Ron Fournier at the National Journal correctly called this “lying about lies” in “an orchestrated deceit.”

Just wait until a large percentage of the American people figure out that the other half of Obama’s guarantee — that “if you like your doctor, you can keep your doctor” — was equally empty.