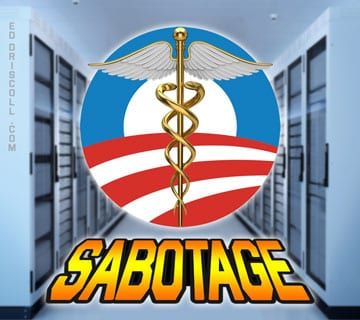 During the Bush 43 administration, leading lights on the left arrogantly christened themselves “the reality based community.”

Many of the same people who claimed at the time to base their assertions and beliefs “more on observation than on faith, assumption, or ideology” have hysterically concocted reasons why HealthCare.gov, surely in size and scope the most disastrously incompetent website rollout ever, cannot possibly be more than partially the Obama administration’s fault. Other nefarious people and shadowy forces, particularly Republicans and conservatives, who in reality “didn’t cast a single vote in favor of the ACA and had no control over its 42-month rollout,” somehow deserve the lion’s share of the blame.

On Thursday, the Washington Post’s Ezra Klein promulgated perhaps the longest list of ways Republicans did “everything possible to sabotage” Obamacare. He considers them hypocrites for criticizing the HealthCare.gov debacle, and believes that “their plan to undermine the law worked too well.”

As he blathers on about this non-existent conspiracy, one thing about which Klein can claim legitimate expertise is in orchestrating one.

In 2008, he founded Journolist, a private and intensely secretive Google Groups forum of 400 left-leaning journalists he coordinated from his blog perches, first at the far-left American Prospect and then, beginning in May 2009, at the Post.

In April 2008, Journolist participants were infuriated with reasonable questions raised by Hillary Clinton herself, as well as ABC’s Charles Gibson and George Stephanopoulos, at a presidential debate between Barack Obama and Mrs. Clinton about the degree of Obama’s philosophical kinship with his longtime pastor, the Reverend Jeremiah “God Damn America” Wright. In reaction, making it appear as if they had each spontaneously developed a case of instant outrage, they drafted an open letter calling the debate “a revolting descent into tabloid journalism and a gross disservice to Americans concerned about the great issues facing the nation and the world.”

The letter and subsequent internal Journolist discussions demanding that group members ignore all matters pertaining to Wright succeeded in killing virtually all subsequent establishment press coverage of Obama and Wright. Combined with Republican opponent John McCain’s decision, clearly in reaction to the enforced silence, to avoid the topic in the vain hope that he might end up being liked by people who would despise him no matter what he did, their conspiracy succeeded in removing an objectively important issue from the fall presidential campaign.

How can anyone, given the administration’s blatant attempts at race-based wealth redistribution and its disastrous foreign policy, still believe that the Obama’s 16-year rendezvous with Wright was an irrelevant matter?

Three weeks into October, Klein apparently felt the need to mend fences with long-time Democratic Party operatives, Democrat officeholders, and the left’s vast fever swamp after publishing several items severely critical of HealthCare.gov’s rollout earlier in the month. He has particularly emphasized the website’s back-end failure to integrate properly, or even at all, with insurance companies processing the trickle of applications which have made it through the gauntlet of HealthCare.gov’s system timeouts and crashes. A fiasco which will make the website’s access and front-end processing issues pale in comparison looms if those back-end integration problems aren’t resolved.

Klein claimed that the following items are germane to the HealthCare.gov’s calamity:

Here is a very short and far from complete list of things with which Republicans, conservatives, tea party members, and the Koch brothers have had absolutely no involvement:

The reality-avoidance community simply refuses to recognize that Obamacare’s failed implementation is a direct result of presidential detachment, Sebelius’s proven track record of government website management incompetence, and an atmosphere of paranoia and intimidation the likes of which I have not seen in my lifetime.

Sorry, lefties. This one’s all on you, and only your desperate ilk will buy what you’re trying to sell.