Now We See How Weak the Pre-Shutdown Economy Was

The September employment report released on Tuesday was bad enough to make one wonder if the Obama administration knew what was in it on September 30, when the 17 percent government shutdown began, and decided to hold it.

The report’s original release date, based on the results of data gathered during the payroll week containing the 12th of the month, was supposed to be just two days later. It is thus reasonable to believe that the government’s Bureau of Labor Statistics already knew what the key numbers were and was only adding finishing touches.

We’ll never know whether Team Obama would have told BLS to release the report if the topline jobs added number had been a good one, because it wasn’t.

September’s report shows that the economy was already slowing down considerably before the partial shutdown commenced. Employers added only 148,000 jobs in September, down from 193,000 in August. The BLS’s Household Survey showed only 133,000 jobs added. Sure, the unemployment rate dropped to a seasonally adjusted 7.2 percent, but that’s only because a paltry 73,000 adults joined the workforce following a decline of over 300,000 in August.

The painful trends we’ve been seeing for months on end in the Obama-Bernanke multi-year Keynesian calamity continued in September. Both the workforce participation rate, at 63.2 percent, and the employment-population ratio, at 58.6 percent, remain at multi-decade lows.

Temporary help services added another 20,200 jobs on top of an upwardly revised 21,200 in August. Since January 2009, the month Barack Obama took office, the economy has added 2.659 million seasonally adjusted jobs. And 785,000, or 30 percent of them, have gone to temps, a segment comprising barely two percent of the workforce.

So desperate was the press to find something positive to say about Tuesday’s report that they tried to claim that changes in full-time and part-time employment during the month “prove” that Obamacare, particularly its 30 hours per week definition of a full-time employee requiring coverage in employers’ existing healthcare plans, isn’t causing a permanent shift in the balance between the two.

Once again, the media’s failure to look at the actual numbers before seasonal adjustment has led them astray: 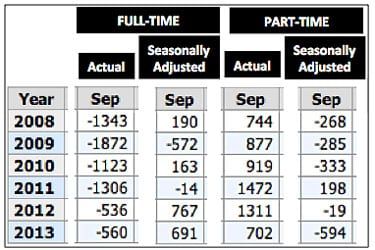 Over at the website of what’s left of Time magazine, Kate Pickert argued that September’s results don’t “support [the] claim that the Affordable Care Act will decrease full-time employment.” But as seen above, actual full-time employment decreased by a slightly larger number (560,000) than it did in September 2012 (536,000). Meanwhile, actual part-time employment increased by 702,000. That’s an historically low number, but it’s still a substantial one-month increase. Sure, the seasonal adjustment calculations, because they consider the past five years of data, produced a large increase and decrease, respectively, in full-time and part-time employment. But the idea that a month where a half-million full-time jobs were lost proves anything positive is laughable.

There’s a far more important overall point. In real terms, the economy, assuming annualized growth of about 1.5 percent in this year’s third quarter, is a bit less than 5 percent larger than it was in the fourth quarter of 2007, its previous peak. Yet full-time employment is still short of its seasonally adjusted November 2007 peak by 4.1 percent, or just under 5 million jobs. Meanwhile, part-time employment is up by over 2.65 million, or 10.7 percent, during that same period. That kind of fundamental shift has not occurred in any other recovery since World War II. There have certainly been other factors at work hindering overall job growth such as over-regulation and the war on coal and fossil fuel-based energy; but there’s no reason to believe that they would cause employers to make conscious moves towards more part-time employment. The one thing which has been hanging over this recovery which has caused employers to change their full-time/part-time mindset is the one thing which employers during other post-war recoveries didn’t have to face: Obamacare.

Obama’s and Senate Majority Leader Harry Reid’s 16 days of partial shutdown bullying only make it more likely that further slowing has subsequently occurred and will continue. Obamacare certainly won’t help, especially as more and more upper middle-income earners not covered by employer plans figure out — assuming they ever get into HealthCare.gov — that the only way short of divorce to keep healthcare costs from bankrupting them under Obamacare will be to work less.

The White House has already acknowledged that “more recent indicators suggest the labor market worsened in the month of October.” It will of course play pin-the-blame on Republicans for all of this, even though it’s Reid’s Senate and Obama himself who consciously chose not to deal with bills passed by the House which would have kept the government running, and even though Obama owns the HealthCare.gov disaster.

They can whine all they want about John Boehner’s alleged obstruction and point all day and all night at cooked polls which supposedly say Republicans and especially tea party conservatives are to blame, but the continued economic malaise, like the HealthCare.gov debacle, is completely and objectively on them.