Friday morning, the government announced yet another downward revision to a previously published economy-related number. The nation’s gross domestic product (GDP), thought to have grown at an annual rate of 3.2% a month ago, was downwardly revised to 2.8%. “Unexpectedly,” of course; analysts thought that the figure would increase to 3.3%.

In the six quarters since the recession ended, the economy under Barack Obama has grown by about 4.4%, and by only 2.7% in the most recent four quarters. By comparison, in the six quarters after the early 1980s recession ended while Ronald Reagan presided, GDP increased by almost 10%, with 8.5 points of that growth taking place during quarters three through six. The economy under Reagan blasted off; under Obama, it’s mired in something worse than mediocrity.

The glaring shortfall in growth under Obama might not be so troubling but for the catastrophic results it has caused in the employment market. In mid-January, I noted, based on data available at the time, that Reagan’s first six post-recession quarters saw the creation of over 4 million jobs, while only 72,000 jobs were created during Obama’s comparable six quarters.

That was before Uncle Sam’s Bureau of Labor Statistics (BLS) completed its annual comprehensive revision. When it went on the books in January’s employment report, it zapped hundreds of thousands of jobs from previously reported figures for the prior 21 months. 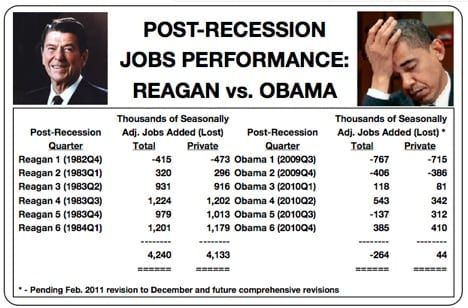 Eighteen months after the recession officially ended, the revised figures show that the economy under Obama is still in the hole by over a quarter-million jobs. That’s because 44,000 job additions in the private sector have been far more than offset by 308,000 jobs losses in the public sector. Here’s a supreme irony, considering that Obama is still somehow perceived as a hero by the state and municipal employees’ unions: all of those seasonally adjusted government job losses — and then some — have occurred not at the federal level, where employment is up by 38,000, but at the state and local levels, where job losses have been 29,000 and 317,000, respectively.

Arthur Laffer and his fellow supply-side economists have more than enough justification to address Will Smith’s line in I, Robot to leftist Keynesian holdouts like the insufferable Paul Krugman: “You know, somehow, ‘I told you so’ just doesn’t quite say it.” Krugman’s latest laugher is that “the stimulus can’t have failed, because it never happened.” Stop it, Paul. The federal government has operated as one big, failed stimulus program since late 2008. Barring a miracle, whether you go with administration or Congressional Budget Office (CBO) numbers, Uncle Sam will show three years of reported deficits totaling over $4 trillion when the current fiscal year ends — even if Tea Party freshmen in the House get absolutely everything they want.
Krugman despairs that Obama “has effectively given up on the idea that the government can do anything to create jobs in a depressed economy.” We should be so lucky to receive such benign neglect. Unfortunately, the administration seems more determined than ever to suppress and prevent job creation:

Bill Whittle opens the most recent of his outstanding videos with this statement:

Y’know, there comes a point where no matter how hard you try to offer the benefit of the doubt, evidence builds up to such a degree that you can no longer deny that the evidence is telling you something.

Halfway into his first term, the foreign policy decisions made by Barack Obama and his administration are so appalling, so destructive in the long-term, they can no longer be credited to inexperience or even incompetence. They’re so consistent, they must be due to ideology.

Replace “foreign policy” with “economic,” and Whittle’s statement is none the falser.