It's the Spending, Stupid

If for some reason, the ad agency that produces those MasterCard “Priceless” commercials ever wrote a commercial  that critiqued government spending, it would sound something like this:

The above recitation illustrates that as bad as the Bell and L.A. examples are, it’s the federal government that can waste money like no other entity ever seen on Planet Earth. Fiscal restraint has of course been a problem for decades, but the spending that has occurred under congresses controlled by Democrats since 2007 has taken this country to the edge of a fiscal and economic precipice.

A little-known fact is that federal spending rose by only 2.8% during fiscal 2007 under the final budget passed by a Republican Congress. I know, zero percent would have been preferable, and it was way too little and too late for a bunch that had let spending grow way too quickly during the previous five years.

Then came the Democrats. Spending during the fiscal year that ended in September 2008, the first full budget year under the control of Nancy Pelosi and Harry Reid, increased by 9.1% to almost $3 trillion. That percentage increase was greater than any Republican Congress under George W. Bush.

They were just warming up. Fiscal 2009 brought the beginning of the $787 billion (before interest) “economic stimulus plan.” All but those in serious denial acknowledge that it has failed to revive the economy, which economist David Rosenberg described on August 25 as already being in a depression. Despite representations to the contrary, the stimulus plan had 9,000 earmarks, including that $2 billion Illinois energy debacle. More generally, entitlement and other spending went into overdrive. Fiscal 2009 ended with a reported deficit of $1.416 trillion.

Recently, the Congressional Budget Office estimated that the deficit for fiscal 2010 will be a bit lower, predicting a figure of $1.342 trillion (see page three at this large-PDF report) after the dust settles. Wowee zowee.

The problem is that both last year’s and this year’s numbers are fudged. Even before considering the off-budget baloney and the Fed’s massive “quantitative easing,” each of which would require at least an additional column to treat properly, Uncle Sam’s real 2009 deficit was $115 billion lower than reported, while the 2010 deficit, assuming no additional non-cash adjustments, will be higher by the same amount.

Beginning in April 2009, the Treasury Department began reporting its “investments” under the Troubled Asset Relief Program (TARP) using what is known as “net present value” accounting. As I noted in a May 2009 column, this was a major departure from the cash-in, cash-out reporting people had come to previously expect, and which most believe still occurs.

Here in capsule form is how it works, and what occurred that has distorted reported results:

Here was my plain-English summary of that $115 billion adjustment when it occurred:

… the administration pushed as much “bad news” (asset writedowns) as it could into last year’s financial reporting, since last year was going to be a disaster no matter what. But since they overdid it with the writedowns last year (“Gosh, how did that happen?”), they can make this year look better than it really has been.

After adjusting for the $115 billion non-cash item just noted (and wryly noting that TARP somehow is treated as “mandatory spending”), and assuming that there are no more surprise TARP writedowns or writeups before the end of the current year, here’s how things really turned out last year, and how they will end up this year if the CBO’s estimates are otherwise accurate (all figures are in billions; numbers that changed from CBO’s original are highlighted): 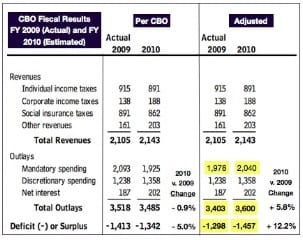 Well, well. While the administration and CBO will claim that spending and the deficit started to head downward in fiscal 2010, the reality is that fiscal 2010 will be significantly worse on both fronts.

One look at Table 3 in the July 2010 monthly Treasury statement confirms that there has been no letup in spending in most areas of the government. There’s a lot of competition for the most offensive increase, but my nominee would be the Department of Education, which through July had spent almost $81 billion compared to “only” $42 billion as of the same time last year. It would be nice to think that nearly doubling federal spending and building Taj Mahal schools with local tax dollars have made American students twice as smart. Dream on.

The administration’s accounting shift cleverly masks what it has really been up to during its nineteen months in office: creating a permanently high spending structure that will become ever more difficult to reduce to a decent size when (or if) sanity finally prevails. A year ago, Victor Davis Hanson called this the “Gorge the Beast” strategy. Its aim is to justify tax increases and enhance the power of the ruling class over everyone else.

It must be stopped. A massive change in congressional leadership in Washington is a prerequisite, but it will only be a start.