Remember when our president was telling us that his number one focus would be Joe Biden’s favorite three-letter word (“J-O-B-S, jobs!”)? It’s hard to believe, but it was only six weeks ago (“Obama to recast agenda to focus on jobs, deficit”) at the State of the Union address.

True to his word (not), it’s been virtually all health care, all the time since, including a new wrinkle that would seriously cripple the employment market.

The president’s reaction to more bad employment news on March 5 was to resort to happy talk, while Senate Majority Leader Harry Reid instead chose crazy talk:

Today was a big day in America. Only 36,000 people lost their jobs today, which is really good.

Besides falsely characterizing the nature of the result, Reid betrayed a fundamental misunderstanding of what Uncle Sam’s monthly Employment Situation report really tells us. It is a knowledge gap apparently shared by the press, most politicians, and a large percentage of the country’s population. It’s something I also explained here 18 months ago, apparently to little avail.

The following charts illustrate the problem: 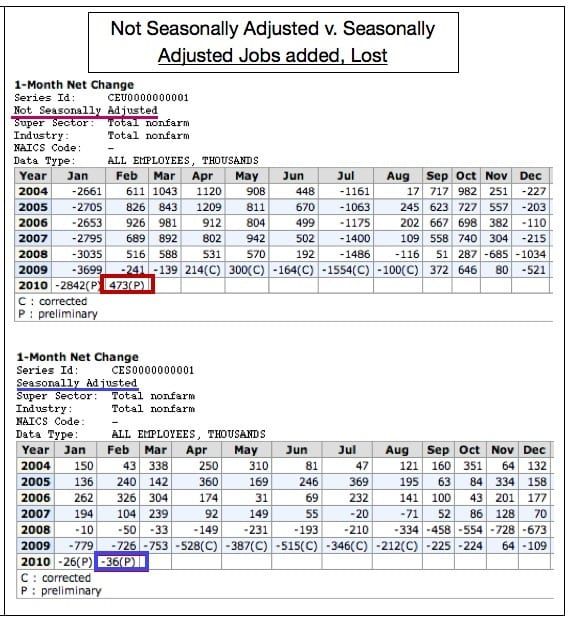 The first chart — Not Seasonally Adjusted (NSA) — shows us how many net jobs the economy really picked up or lost each month going back to January 2004. It tells us that 473,000 more people were working during February than were working during January.

The second chart — Seasonally Adjusted (SA) — reframes the actual results by adjusting them for seasonal trends like Christmas hiring and summer jobs. In this case, those machinations resulted in 36,000 jobs lost. There’s nothing wrong with this exercise; it’s a legitimate form of statistical smoothing designed to make month-to-month results more readily comparable. But it does not — repeat, does not — tell us what actually happened in America’s factories, job sites, and offices in any given month, as the vast majority of media reports and political announcements would lead one to believe.

Harry Reid could have tried to tell us how great February’s NSA 473,000-job pickup was. In context, it wasn’t that great at all. In fact, as you can see above, it came in lower than February 2008, when the people at the National Bureau of Economic Research say we were in the third month of an economic recession as they define it (as normal people define it, the recession didn’t begin until the third quarter of 2008). Moreover, it was 241,000 jobs lower than the February 2004-2008 average. If the employment situation were really in recovery in February, that difference would have been almost zero. Beyond that, February’s actual result using this metric was far worse than January’s, when the result only trailed the January 2004-2008 average by 72,000.

This isn’t an improvement; it’s a serious deterioration.

The only reason February’s SA number of -36,000 came in as low as it did (but still worse than January’s) is that the SA calculation took February 2009’s free-fall result into account, making it a statistically correct result that confuses more than it enlightens. Further evidence supporting that point is that the SA result for February 2010 is better than February 2008, which as already shown based on what really happened, doesn’t reflect the underlying reality.

If Obama and Reid really wanted to do something to seriously improve the employment situation, they would immediately call off their post-State of the Union obsession with imposing statist health care on a nation that doesn’t want it and is fiercely resisting it. Besides the federal government itself, the health care industry has been one of the few areas where employment has risen in the otherwise dismal POR (Pelosi-Obama-Reid) economy America has endured since about June of 2008. Since then, the sector has added 313,000 jobs (386,000 after seasonal adjustment). Once statist health care’s inevitable rationing and cost controls kick in, health care employment would at best stagnate, and more than likely shrink.

A press report earlier this week about a possible new wrinkle in ObamaCare demonstrates that the Democratic Party’s alleged interest in job creation is feigned at best and hostile at worst. On Monday, the Associated Press reported that a new iteration of the bill pushed by House Democrats “would require businesses to count part-time workers when calculating penalties for failing to provide health coverage for employees. Smaller businesses would be exempt. The Senate bill would count only full-time workers in applying the penalties, but under the change, described by a Democratic aide, two part-time workers would count as one full-time worker.”

Since the vast majority of companies do not make health coverage available to part-timers, this proposal is best seen as a direct payroll tax on companies who rely heavily on them. In the fantasy world of Washington, this appears to be an attempt to force companies to hire more people to work full-time or to extend coverage to part-timers on their own. If it ever arrives in the real world, what it will really do is raise prices, increase unemployment, impede economic growth, and put thousands of companies out of business. It will also virtually destroy the part-time employment market, shutting the door on students, homemakers, and others who can’t possibly commit to working full-time, and shouldn’t be required to.

But that’s how it goes with this out-of-touch bunch. They think they’re so smart, when 75 years of their “brilliant” ideas have led us to the verge of national bankruptcy.

As with so many other areas of governance in this administration, one must wonder if they’re trashing things accidentally or deliberately.