The evidence that the human-caused global warming/climate change effort may constitute one of the biggest scams in all of human history continues to mount. The contents of emails and other data surreptitiously obtained from a UK climate research facility add further fuel to that already burning-hot fire.

Predictably, while pretending to give the incident and its fallout reasonable coverage, the establishment media has generally ignored the most damning email of them all. Authored by Kevin Trenberth, head of the Climate Analysis Section at the National Center for Atmospheric Research in Boulder, Colorado, it addresses what has been happening with temperature changes in recent years, i.e., not a lot, with a slight cooling trend.

Trenberth’s note reacts to an October 9 article by Paul Hudson, a weather presenter and climate correspondent at the previously climate hysteria-infested BBC. In “What Happened to Global Warming?” Hudson has the unmitigated gall to note that “for the last 11 years we have not observed any increase in global temperatures. And our climate models did not forecast it, even though man-made carbon dioxide, the gas thought to be responsible for warming our planet, has continued to rise.”

Hudson, clearly in response to heavy criticism, reiterated his article’s original theme in a follow-up blog post, writing that “none of the climate models suggested that global temperatures would not rise any further for at least another 10 years, which is what we have observed.”

Taken at face value and combined with even a modicum of common sense, Trenberth’s treatment of Hudson’s piece and his other accompanying comments clearly cast serious doubt on the scientific credibility and integrity of the entire AGW (anthropogenic global warming) enterprise (bold is mine):

Subject: Re: BBC U-turn on climate

Well I have my own article on where the heck is global warming? We are asking that here in Boulder where we have broken records the past two days for the coldest days on record. We had 4 inches of snow. The high the last 2 days was below 30F and the normal is 69F, and it smashed the previous records for these days by 10F. The low was about 18F and also a record low, well below the previous record low.

This is January weather (see the Rockies baseball playoff game was canceled on Saturday and then played last night in below freezing weather). …

The fact is that we can’t account for the lack of warming at the moment and it is a travesty that we can’t. The CERES data published in the August BAMS 09 supplement on 2008 shows there should be even more warming: but the data are surely wrong. Our observing system is inadequate.

CERES stands for the Clouds and the Earth’s Radiant Energy System run by NASA.

Trenberth has “acknowledged the email is genuine,” according to Kim Zetter at Wired’s Threat Level blog. His email leaves two alternatives:

Per Ms. Zetter, Trenberth’s defense in the wake of the email’s release chooses door number two:

“It says we don’t have an observing system adequate to track it, but there are all other kinds of signs aside from global mean temperatures — including melting of Arctic sea ice and rising sea levels and a lot of other indicators — that global warming is continuing,” he says.

He can protest until the methane-generating cows come home, but the following implication of Trenberth’s trembling response is inescapable: “Even though we’ve relied on them all along to build our case, we suddenly can’t rely on temperature measurements to prove or disprove the existence of global warming. Our models nonetheless simply have to be right.” His backup argument if the temps are indeed correct — which would mean that the model generating “the CERES data” and other similar simulations will have been proven to be flawed — would be, “Well, even if the models are wrong, we still have proof in melting Arctic sea ice, rising sea levels, etc.”

The Intergovernmental Panel on Climate Change, whose work Trenberth cites in a recent paper to support his belief that “global warming is unequivocally happening,” doesn’t name any other factors beyond temperature, ice, and sea levels in the pull quote of its “Summary for Policymakers”: “Warming of the climate system is unequivocal, as is now evident from observations of increases in global average air and ocean temperatures, widespread melting of snow and ice, and rising global average sea level.”

So unless Trenberth has something meaningful in the “lot of other indicators” he casually cites in his response to his email’s release, he and his brethren are in a heap of trouble. That’s because by his own logic, temperature measurements must be rejected as credible evidence. Further, his presumptive, supposedly settled-science arguments about Arctic sea ice and rising sea levels melt upon only a cursory review.

It isn’t totally obvious that the overall sea ice is on a serious long-term melting trend. In fact, from what is “the lowest coverage ever recorded in the summer of 2007,” “the [Arctic] ice coverage rebound[ed] back to more near normal coverage” over the next winter. There is also a considerable debate as to whether “Antarctic ice is growing, not melting away,” or whether it “may not be losing ice as fast as once thought.”

It’s even less clear that sea levels are meaningfully rising; the preponderance of the evidence is that they are not. In fact, Nils-Axel Mörner, the head of the Paleogeophysics and Geodynamics Department at Stockholm University in Sweden, who is described as “one scientist who knows more about sea levels than anyone else in the world,” asserts that the rising sea levels claim is “the greatest lie ever told.”

Well, there’s a lot of competition for that title, but this nifty little chart from Mörner shows that fears of catastrophic rises in one controversial area hold very little water: 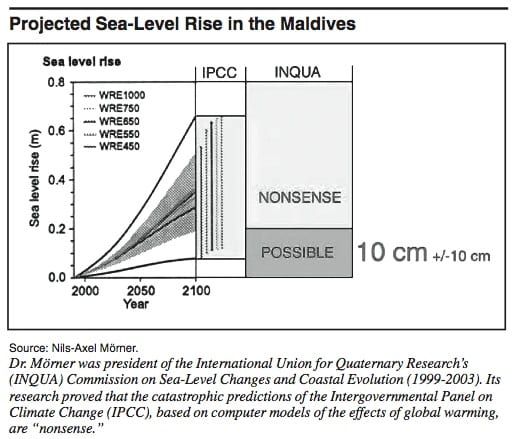 If you look at 2050, 41 long years from now, you’ll see that Mörner predicts a mean possible rise of about 0.05 meters, or just under two inches. That is not much more than a millimeter per year.

The alarmists are kidding, right?

Wrong. The purveyors of global warming baloney, or “globaloney” as yours truly and many others have been calling their belief system for years, are hell bent on totally reconfiguring the world’s industrial and commercial structure through cap and trade, and completely transforming its political order through transnational agreements such as the one under consideration next month in Copenhagen. They are bound and determined to have a world-run body assume an unprecedented level of control over the everyday actions of absolutely everyone, everywhere on the globe.

Before you do that, guys and gals, you’re going to have to present compelling evidence. Level, slightly declining, and/or not-credible temperature readings; faulty computer models; ice caps that may or may not be melting; and sea levels that may or may not be rising by less than the thickness of a dime annually won’t cut it. Kevin Trenberth and the globaloney in-crowd seem to have known all of this for quite some time. That is the unforgivable element of the scandal.