Social Security: The Train Wreck Is at the Station

During the third quarter, it has become dreadfully obvious to anyone looking at the numbers that Social Security has reached the point of crisis.

It wasn’t supposed to happen this soon. Year after year during this decade, Social Security’s trustees told us that while the system’s long-term solvency problems are very real, a cash crunch was roughly a decade away.

But in their most recent report in May, based on the system’s situation as it existed at the end of 2008, the trustees ominously trimmed that estimate to seven years:

Annual cost will exceed tax income starting in 2016, at which time the annual gap will be covered with cash from redemptions of special obligations of the Treasury that make up the trust fund assets until these assets are exhausted in 2037.

This decay occurred because the POR (Pelosi-Obama-Reid) economy kicked into high (or, I should say, low) gear. In the middle of last year, the Democratic Party’s terrible triumvirate took the economy down; the only question that remains is whether they were horribly misguided or deliberate.

In the face of $4 gas prices, Nancy Pelosi, Barack Obama, and Harry Reid refused to seriously entertain the idea of additional exploration and drilling, in effect making clear their intention of starving the nation of energy, regardless of the consequences, to support what may be human history’s greatest hoax.

They also promised hundreds of billions of dollars in tax increases on the most productive in the name of redistributing the money to everyone else. For the first time in my adult life, a major political party promised actions that anyone with clear eyes knew would seriously damage the economy.

At the time, the economy was modestly growing and had improved from a rough first quarter; nonetheless, it remained fragile. Then Pelosi, Obama, and Reid did their dirty work. At the time I identified the POR economy’s inception, I asked these questions:

In this business climate, are you going to hire more people? Replace employees when they leave? Expand your business? Even if demand for your products or services is strong, which is still the case in many sectors, you’re going to try to get through with the resources and facilities you have.

That’s exactly what began to happen, and then some. Entrepreneurs, businesspeople, and investors battened down the hatches, expecting the worst.

The worst arrived, in the form of the decades-in-the-making, Community Reinvestment Act-driven collapses of the Democratic Party gravy trains known as Fannie Mae and Freddie Mac. These were followed in short order by the bipartisan TARP debacle. Washington’s elites, especially Pelosi, Obama, and Reid, showed anyone who still doubted that they could care less what we think. Sadly, George W. Bush and John McCain were among the crunch-time betrayers. The whole sorry saga convinced just about every business leader who hadn’t figured it out already that hard times, entirely the creation of our governing class, were on the way.

Comprehensively revised numbers for the economy’s gross domestic product (GDP) show just how dramatic the POR economy’s damage has been and continues to be. Second-quarter 2008 GDP, at a revised annualized 1.5% (from 2.8%), was still positive and slightly ahead of population growth. But the third quarter was revised from -0.5% to -2.7%. The economy swung 4.2% in the wrong direction (from +1.5% to -2.7%), despite the fact that June was probably the best month in the second quarter. In fact, the National Bureau of Economic Research, while still incoherently clinging to its belief that the economy has been in recession since December 2007, says that “estimated monthly real GDP reached one peak in January 2008 and another, higher peak in June 2008.”

The wheels totally fell off during the next two quarters. Annualized GDP fell by 5.4% and 6.4%, respectively, in the final quarter of 2008 and the first quarter of 2009. The POR economy became the POR recession as normal people define it. Through the second quarter of this year, the economy has contracted by 3.8% since the POR economy began.

The effect on employment, and therefore the number of people paying Social Security taxes, has been dramatic. Monthly seasonally adjusted job losses, which averaged 137,000 from January to August 2008, have averaged an utterly intolerable 486,000 during the past 12 months: 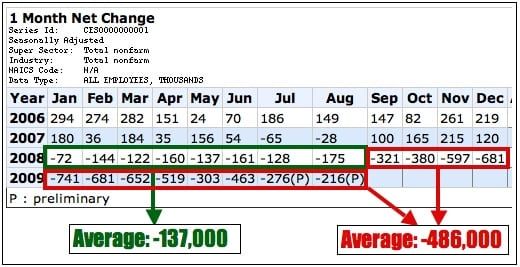 Meanwhile, the seasonally adjusted unemployment rate has risen to 9.7%.

Social Security’s trustees recognized the negative impact of the POR economy through the end of 2008, which is why the cash breakeven point came back to 2016. But since then, that seven-year cushion has vanished.

The Congressional Budget Office (CBO) predicts that the system will report what it calls a “primary surplus” (tax collections less benefits and administrative costs) of $18 billion during the government’s September 30, 2009, fiscal year, followed by small cash deficits in fiscal 2010 and 2011. Okay, but more recently, as shown here, July had a cash deficit of a relatively small $523 million; August’s deficit of $5.76 billion was far more serious.

September is on track to be even worse than August. Through Friday, September 25, overall Treasury receipts from economic activity were 28.5% lower than they were as of September’s final Friday a year ago: 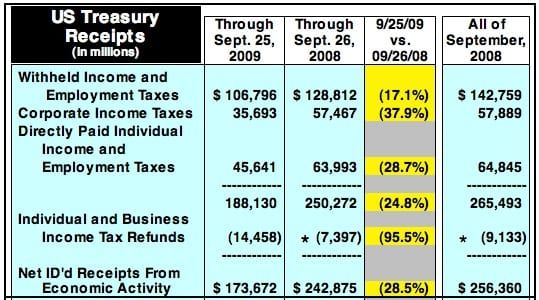 President Obama’s chief economic adviser Larry Summers believes that “the level of unemployment … will, by all forecasts, remain unacceptably high for a number of years.” Collections will lag for quite a while.

Meanwhile, Social Security payouts have skyrocketed and are locked into higher near-term levels than were anticipated, thanks to a 23% spike in applications for retirement benefits, many by those in their early 60s who lost their jobs. It seems highly doubtful that the tiny surpluses CBO hopes for during the next two years will materialize. After that, the wave of retiring baby boomers will probably send annual cash deficits into triple digits in short order.

Finally, if you’re banking on the $2.4 trillion Social Security “Trust Fund” for relief, forget about it. Contrary to established wisdom, it is not a stash of cash or investment securities set aside to pay future benefits. Rather, as demonstrated previously, it consists almost entirely of IOUs from the rest of the government, which happens to be about $12 trillion in debt. Barring major structural reform, Social Security’s ever-worsening cash shortfalls will of necessity have to be covered by either borrowing more, raising taxes, or cutting benefits.

Aren’t you glad Pelosi, Obama, and Reid thwarted and then applauded the demise of Social Security reform efforts four years ago?