January’s Employment Situation Report from Uncle Sam’s Bureau of Labor Statistics (BLS) was even worse than expected. Seasonally adjusted employment fell by 598,000 jobs and the unemployment rate rose to 7.6%.

In his Saturday address that followed this news, President Barack Obama was correct in pointing out that 3.6 million jobs have been lost since the recession, at least as “defined” by the National Bureau of Economic Research (NBER), began. The recession, as normal people define it (“a decline in gross domestic product [GDP] for two or more consecutive quarters”), began in the third quarter of 2008 and became official late last month when the fourth quarter came in negative.

What Mr. Obama “somehow” forgot to tell us is that almost 1.8 million of those seasonally adjusted job losses have occurred since his election, when his non-stop economic no-confidence game went into high gear, and that 2.8 million jobs have gone away during the seven months that began in July 2008, the first full month of the POR (Pelosi-Obama-Reid) economy: 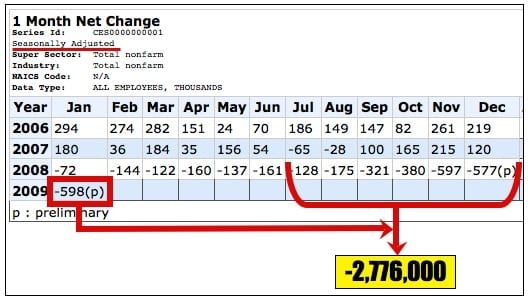 Beyond that, in comparing the raw month-to-month figures, i.e., before seasonal adjustment, it’s clear that conditions on the ground in the real economy are in a worse state of decay than the seasonally adjusted data would indicate. The November 2008 to January 2009 economy underperformed the same months of the previous year by over 2.2 million jobs: 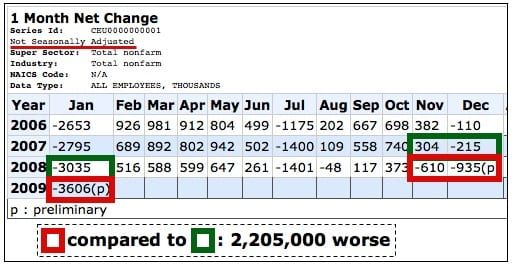 In the same report, the BLS did something else that virtually everyone ignored: it issued its annual comprehensive revision to previously released jobs numbers.

Let’s compare the last two-plus years before and after the revision: 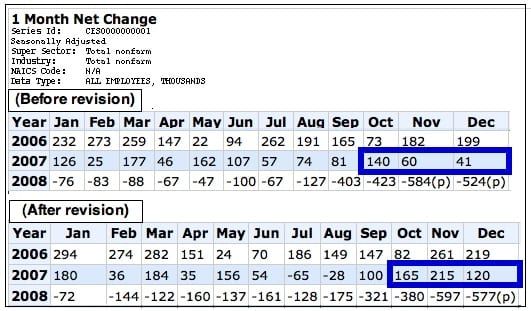 Yet the NBER claims that the recession started in December 2007, in a month when the economy added 120,000 jobs.

The BLS revision also shows that seasonally adjusted employment fell by 335,000 more jobs in the first half of 2008 than was previously reported. You would think that this might make NBER’s case that the recession was in progress during early 2008 stronger. To an extent, yes; but their case is nowhere near strong enough — at least not yet.

Comparing the first half of 2008 to previous recessionary and non-recessionary periods gives plenty of justification to doubt NBER’s call.

Here is how NBER defined a “recession” in its December 2008 announcement:

A recession is a significant decline in economic activity spread across the economy, lasting more than a few months, normally visible in production, employment, real income, and other indicators. …

Looking at GDP and employment (space prevents reviewing the others), here is how the four most recent six-month periods contained within NBER-defined recessions compare: 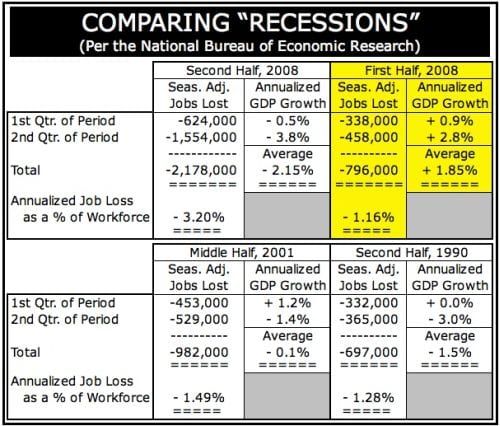 The first half of 2008 sticks out for three reasons:

Now let’s look at a couple of quarters where job growth contracted that NBER decided were not recessionary:

Each of the two non-recession quarters in this table has lower GDP growth than the second quarter of 2008, while job losses during the first quarter of 2002 were almost as bad as 2008’s first six months.

Keep in mind that the 1990-1991 and 2001 recessions are considered “among the … mildest on record.” So it’s safe to say that even if NBER’s recession call is somehow ultimately correct, the first half of 2008 in isolation would likely have been, even by their stretched definition, even milder.

But sadly, things got worse. They didn’t have to.

It’s revealing that NBER’s own report acknowledges in at least three different places that the economy was improving during 2008’s second quarter (bolds are mine), but got stopped in its tracks after that:

Our measure of real personal income less transfers peaked in December 2007, displayed a zig-zag pattern from then until June 2008 at levels slightly below the December 2007 peak, and has generally declined since June.

The Federal Reserve Board’s index of industrial production peaked in January 2008, fell through May 2008, rose slightly in June and July, and then fell substantially from July to September.

Thus, it’s reasonable to believe that if the architects of the POR economy and their party hadn’t done their confidence-shattering “magic” during the second half of 2008, the economy may very well have recovered.

But the terrible triumvirate of Nancy Pelosi, Barack Obama, and Harry Reid insisted on starving the economy of energy, and persisted with proposals for jaw-dropping tax increases on the most productive. Finally, their party’s decades-long romance with lending mortgage money to unqualified borrowers came to a head at the “worst” possible time — for the nation, not for them — with the multibillion-dollar implosions at Fannie Mae and Freddie Mac, followed by the spread of the wreckage to other financial institutions.

Now the president and his party are rushing a “stimulus” package through Congress and trash-talking the economy on a daily basis in an attempt to hold back a rising tide of public opposition. There’s one big problem, as Idaho Democratic Congressman Walt Minnick has pointed out: 80% of the $800-$900 billion or more in spending “doesn’t create jobs in this year and next.”

The mislabeled “stimulus” will, if it passes, almost certainly extend the conditions we saw during the last half of 2008. Much more of this, and regardless of what NBER says, we’ll soon be thinking of 2008’s first half as “the good old days.”