In a proposal that is stunning in both its ignorance and arrogance, a South Central Los Angeles politician wants to place a moratorium on the construction of new fast food restaurants in her area.

What is unfortunately not nearly as surprising is how Washington Post reporter Karl Vick let some huge, uh, whoppers go by without challenge when he covered this development.

Here how Vick’s story, as carried at Boston.com, begins (HT Hot Air Headlines; bolds are mine):

Citing alarming rates of childhood obesity and a poverty of healthful eating choices, a city councilor is pushing for a moratorium on new fast food restaurants in South-Central Los Angeles.

“Some people will say, ‘Well, people just don’t have to eat it,’ ” said Jan Perry, the Democrat who represents the city’s overwhelmingly African-American and Latino District 9. “But the fact of the matter is, what if you have no other choices?”

The proposed ordinance, which is awaiting a committee hearing, takes a page from boutique communities that turn up their noses at franchises.

It is supported by nutritionists, frustrated residents, and community activists who call restrictive zoning an appropriate response to “food apartheid.”

You would think that there are no grocery stores in South Central offering all manner of nutritional options that often cost less per meal than fast food. Quite the contrary: Web searches on two chains I’m aware of in the area reveal that there are ten Ralph’s or Food4less stores within four miles of the address of the advocacy group whose executive director is quoted in the article, and at least three Vons within a reasonable distance of its zip code. When did eating store-bought food at home become a nonviable option?

Here are some relevant points to chew on:

And wait a minute: Didn’t something really nasty happen in this area about, oh, 16 years ago? That’s right, the LA riots. It seems to have been forgotten that when order was restored, one of the biggest concerns was whether businesses would want to build or rebuild in or near the affected area. Now that many businesses have done that, and “too many” happen to be fast food places, that’s apparently not good enough.

But the most offensive aspect of the article is the blithe assumption on the part of Vick and many whom he quoted that no nutritional fare is available at fast food restaurants. For cryin’ out loud, that assertion has been untrue for at least the 29 years Wendy’s has had salad bars or a la carte salads. Is it really possible that Karl Vick and his layers of fact-checkers and editors don’t know this?

In case he doesn’t patronize fast food chains himself, Vick could have foraged through this marvelous creation known as the Internet and visited their respective web sites. Look what he could have found in mere moments: 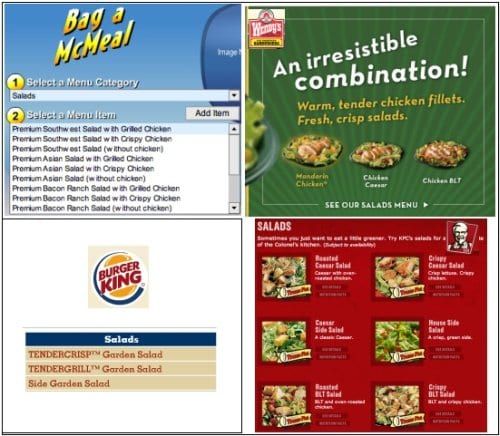 Links (not all links will display properly in all browsers): Wendy’s; McDonald’s; Burger King; KFC.

Despite all of this, one person quoted, Marqueece Harris-Dawson, executive director of Community Coalition, had the gall to say, “You try to get a salad within 20 minutes of our location, it’s virtually impossible.”

Really? Using the now-demonstrated salad-serving chains’ restaurant locators for either the 90044 zip code or the specific address given for Mr. Harris-Dawson’s organization, one learns that there are:

Instead of swallowing whole the “food apartheid” slop that Ms. Perry, Mr. Harris-Dawson, and others were feeding him, Mr. Vick should have been asking them whose fault it is if customers aren’t choosing of their own free will the nutritious foods obviously and readily available at the fast food outlets they patronize.

What’s next? Quotas on the number of different types of meals that can be served? Oops — I probably shouldn’t have written that. Now the food police have yet another idea.