How the Times Mined for Controversy in WV

On January 2, 2006, a coal mine explosion in Sago, West Virginia, trapped 13 miners for nearly two days. Only one survived. In the aftermath, any doubt about the existence of an anti-George Bush agenda at the New York Times disappeared.

In a January 5 editorial, the Times, sensing a pile-on opportunity, and without any tangible evidence, made it clear where it thought accountability for Sago resided:

The Bush administration’s cramming of important posts in the Department of the Interior with biased operatives from the coal, oil, and gas industry is not reassuring about general safety in the mines.

Just as Hurricane Katrina forced Americans to look at the face of lingering poverty and racism, this mining tragedy should focus us all on another forgotten, mistreated corner of society. … The dozen dead miners deserve to be memorialized with fresh scrutiny of the state of mine safety regulation and a resurrection of political leadership willing to look beyond Big Coal to the interests of those who risk their lives in the mines.

There was only one problem with the paper’s narrative, and it took very little research to prove it: Up until Sago, by any objective measurement, mine safety had improved during the Bush administration’s four years of accountability, both in terms of fatalities and on-the-job injuries.

Most obviously, fatalities had fallen dramatically: 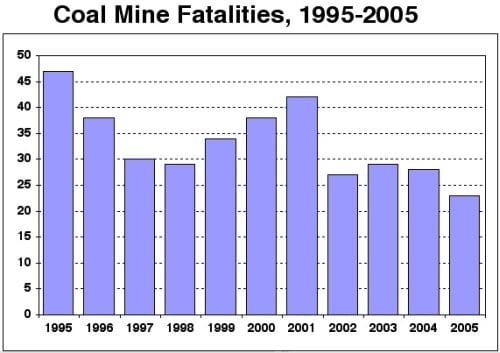 What was especially annoying was that anyone at the Times could have obtained this information from the website of the Mine Safety and Health Administration (MSHA) in minutes. But the paper apparently had little interest in letting the facts get in the way of an opportunistic rant.

Make that two opportunistic rants. The next day, apparently frustrated that the fatality figures contradicted their attempted meme, and by the center-right blogswarm that shouted it down, a second Times editorial, apparently coordinated with the AFL-CIO, complained about alleged Bush budget cuts at MSHA:

But in accounting for the deaths, inspectors should look as well into the budget cutbacks and staff attrition that have marked the Bush administration’s management of its own ranks in the Mine Safety and Health Administration. The latest budget imposes a $4.9 million cut for the safety agency, according to Congressional critics who estimate that the agency has suffered a reduction of 170 positions in the past five years.

The claim that the agency’s budget had affected safety also didn’t hold up to more than a few minutes of scrutiny: 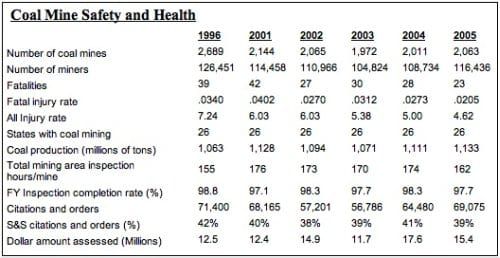 Note: The chart was copied from a since-updated version of this page at the MSHA website. The original post at BizzyBlog had summary data from 1995 and 2001-2004.

The Times simply had no justification, other than pleasing its Bush-deranged readership, for going after the administration before the Sago investigations even began. The paper’s industry-crony accusation was especially odious. Staffing safety-related positions with conscientious and industry-knowledgeable people usually leads to greater safety because of increased cooperation instead of confrontation.

Congress and the administration responded to Sago by passing the Mine Improvement and New Emergency Response (MINER) Act. As would be expected after a tragedy, it included tougher enforcement and new procedures. Many other measures MSHA has taken beyond the scope of the MINER Act are at the bottom half of this MSHA page.

After two relatively unsatisfactory years, it appears that 2008 may end up being the safest year on record for all U.S. mines (including coal and metal/non-metal; picture is from this PDF file obtained at MSHA’s site): 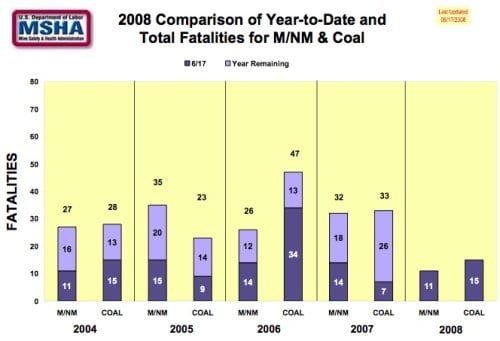 If that pleasant result occurs, don’t expect to find news of it in the Times.