There is talk that John McCain actually has a chance to take California in November’s presidential election.

Don’t count on it.

Governor Arnold Schwarzenegger may have endorsed McCain for president, but his economic stewardship will likely be fatal to the Arizona senator’s chances of winning the Golden State.

California’s economy is performing so poorly that it is singlehandedly making the rest of the nation’s economy look worse than it really is.

Take just one measure, unemployment (Source: Bureau of Labor Statistics; the seasonally adjusted “sum of the states” unemployment rate of 4.92% varies from the nationwide rate of 5.0% because of differing data collection methods): 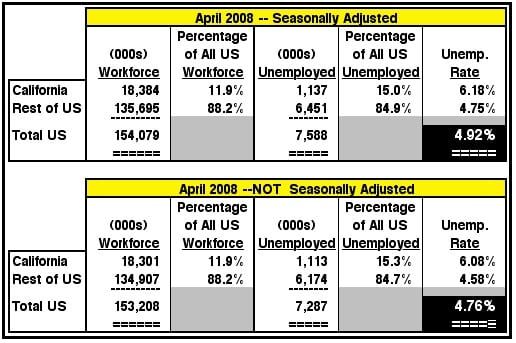 The Not-So-Golden State has almost 12% of the country’s workforce, but 15% of its unemployed. Without California, the nation’s unemployment rate would be almost 0.2% lower, and the press wouldn’t be obsessing about the supposed recession (or at least not as much).

Worse still, less than five years after California’s historic recall of sitting Governor Gray Davis and Schwarzenegger’s landslide election to replace him, the Golden State is once again in a serious self-inflicted budget crunch:

Unlike previous summer standoffs during [Governor Arnold] Schwarzenegger’s reign, the state this time could run out of cash. The latest projection is that the till could run dry in early September.

The governor wants to close a $15 billion budget gap by, of all things, convincing Californians to gamble more — a lot more:

Schwarzenegger last week called for the state, in essence, to borrow against future revenues generated by a massive expansion of the lottery. The state would receive $15 billion over three years from Wall Street investors and pay it back from lottery proceeds over 30 years. Lottery sales would have to double for the plan to work.

How did it come to this?

There are many reasons, but the state’s 12-year refusal to get with the program on welfare reform is certainly among the biggest.

The nation’s landmark welfare reform law went into effect in 1997. By any reasonable measure, it has been a resounding success. Nationwide, as of December 2007, the number of welfare recipients was 68% lower than 11 years earlier.

But California’s welfare rolls have for decades been twice as high, as a percentage of the population, as the rest of the country. The declines should have been even more dramatic, and weren’t.

Now the situation is getting worse. Despite having so much room for improvement, and a golden opportunity handed to him to do something about it, welfare rolls in California on Schwarzenegger’s watch have gone up, while the rest of the country has continued to enjoy significant declines.

Here are the raw year-end numbers of recipients and families on welfare in California and the rest of the country since 2002:

These graphs illustrate just how bad things are: 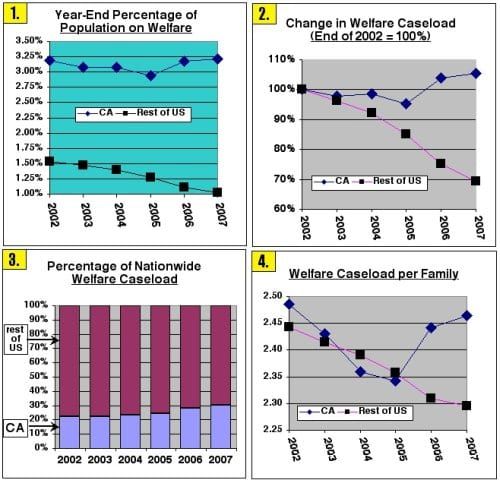 Taking them one at a time:

Governor Schwarzenegger and his state were very fortunate during his first few years in office. The economic growth created by the Bush tax cuts came at just the right time. The state also received some lucky onetime windfalls, including the hundreds of millions of dollars founders and insiders at Google coughed up when they cashed in their stock options.

Unfortunately, it appears that the good fortune enabled the state to avoid serious expenditure reform in welfare, and surely other areas, which Schwarzenegger should have aggressively undertaken when he took office.

Now the party’s over. Because of that, the chances that John McCain will be partying over a November win in California are nowhere near as good as they should be.