Social Security: Anything but Secure

Long-Range Results
Under the intermediate assumptions, OASDI cost will increase more rapidly than tax income between about 2010 and 2030 due to the retirement of the large baby-boom generation. …

Annual cost will begin to exceed tax income in 2017 for the combined OASDI Trust Funds, which are projected to become exhausted and thus unable to pay scheduled benefits in full on a timely basis in 2041 under the long-range intermediate assumptions.

Many readers, and many reporters who should know better, naively conclude from this that Social Security’s big problems are 33 years down the road. Others more astutely note that 2017 is when the trouble starts.

I’m here to tell you that as far as the government’s full fiscal situation is concerned, the trouble will really begin in 2010. Things will get progressively worse for the next six years (2011-2016), and go “code red” after that.

To understand why, let’s establish a few undeniable facts about Social Security (Medicare is its own separate nightmare).

For years, Social Security has been taking in more in taxes than it has paid out in benefits — in recent years, lots more. In fact, Social Security has run a 22-year “surplus” of over $2.1 trillion, as reported by the Congressional Budget Office (the full report is a PDF found at this CBO page): 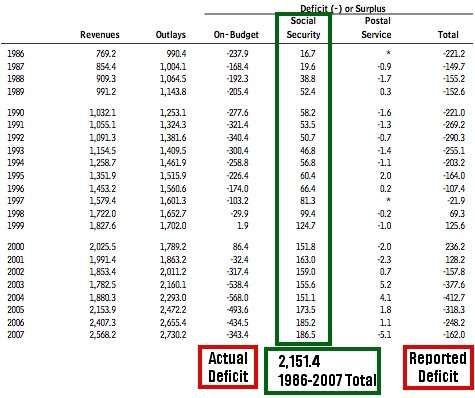 That must mean that Social Security’s Trust Fund is flush with investments, right?

Wrong. This bit of history explains why:

In early 1968 President Lyndon Johnson made a change in the budget presentation by including Social Security and all other trust funds in a “unified budget.”

Social Security’s Trust Fund, instead of being a separate, untouchable stash of cash and investments (i.e., instead of being run like a normal pension plan), thus became money that the rest of the government could raid.

This fiscal sleight-of-hand didn’t matter much until the mid-1980s; the net Social Security surplus from 1968-1985 was only about $3 billion. But as you see above, the system’s surpluses exploded after that as the Baby Boomers entered their prime earning years.

What have the politicians in Washington done with those surpluses? They’ve spent them, by continually borrowing from Social Security’s “Trust Fund.”

By including Social Security in a “unified” budget and raiding its surpluses, Uncle Sam has been able to paper over typically huge deficits in all other government operations. For example, as you can see above, in fiscal 2007, the government’s operational, or “on-budget,” deficit was $343.4 billion; but after netting in the Social Security surplus and the Postal Service, it “officially” reported a deficit of $162 billion.

The Social Security “Trust Fund” is thus nothing but a pile of IOUs from the rest of the government — which is itself over $9.4 trillion in debt.

So there is no money to speak of in the “Trust Fund” to pay benefits. There is also no indication from anyone who could make a difference in Washington, including the three presidential candidates, that they want to change this situation.

Like it or not, the next president is going to face the “Trust Fund” problem early in his or her first term. That’s because Social Security’s annual surpluses are going to start shrinking, and quickly. You can already see the looming trouble above in the minimal change (less than inflation) from 2006 to 2007.

In 2010 (perhaps 2009, if the economy slips into recession), that subsidy to the rest of the government will get smaller with each successive year. Every year in which the subsidy decreases will be a year with three stark choices: cut spending, raise taxes, or issue more debt.

To believe that the problem doesn’t become serious until 2041, you have to believe that the government, starting in 2017, will “somehow” be able to pay back what will by then be about $4 trillion in Social Security IOUs over a period of 24 years — an average of about $170 billion a year in principal alone — without significantly disrupting or tanking the economy. Surely you jest.

Tom Blumer is a CPA based in Mason, Ohio, outside of Cincinnati. He presents personal finance-related workshops and speeches at companies, and runs BizzyBlog.com.