E.Coli in Organic Food Leads to 50 Dead in Germany 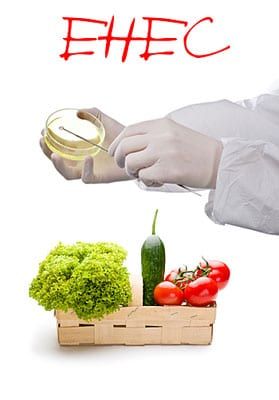 As everyone knows, Mother Nature not only knows best but means us no harm: and therefore, the less we mess around with her and her products, the better. Although many people may have remarked, more in sorrow than in anger, how small and shriveled organic vegetables often appear by comparison with those that have been treated with chemicals, it is obvious that they (the organic ones) must be better for us because they are nearer to what Mother Nature intended.

This item of faith took something of a knock recently with the outbreak of Shiga-toxin-producing E. coli food poisoning in Germany. It was no small matter: more than 4000 people suffered from it and more than 50 died.

Papers in the latest New England Journal of Medicine from the Robert Koch Institute in Germany trace the epidemic and describe its characteristics. Anyone who doubts the brilliance of modern epidemiological methods, and the astonishing rapidity with which they permit the cause of an outbreak to be traced, notwithstanding initial mistakes, should read this paper. What once took millennia to understand now takes weeks.

The authors used three methods, knowing as they did from clinical and laboratory studies that the epidemic was caused by E. coli. First, they asked people who had suffered from food poisoning, and a series of controls, what they had eaten.  Second, they asked the same question of people who had eaten in a restaurant in a town geographically central to the outbreak. Finally, they traced individual outbreaks to an original, single source.

The epidemic was caused by eating raw bean sprouts grown at an organic farm where the products had probably been contaminated from seeds imported from Egypt as long as two years before. One of the curious things about the epidemic was that more women suffered from it than men, presumably because women are (at least in Germany) more anxious to eat healthily than men.

It is important to find the source of outbreaks not only for health but economic reasons. Before the source had been traced to an organic farm in Northern Germany, German health officials had suggested that Spanish cucumbers might be the source, and Spanish cucumber-growers had to destroy much of their crop. The European Commission generously awarded $300,000,000 of other people’s money to compensate the farmers for the initial, though understandable, mistake. A blanket ban on European vegetable exports to Russia was enforced, thus impoverishing the Russian diet yet further, until the elucidation of the cause of the outbreak. Overall, the cost of one organic farm in Germany to European horticulture is said to have been in the region of $600,000,000.

The E. coli that caused the outbreak was a new strain, and it will bring some comfort to believers in the benevolence of Nature to know that one of the evolutionary pressures under which it developed was the widespread use of antibiotics. Nevertheless, perhaps it would be a good idea to print on all health-food packaging and vitamin supplements the following words: WARNING: OVER-CONCERN FOR YOUR HEALTH MAY BE DAMAGING TO YOUR HEALTH.

(Image above, thumbnail on PJM homepage by Shutterstock.com.)

Theodore Dalrymple, a physician, is a contributing editor of City Journal and the Dietrich Weismann Fellow at the Manhattan Institute. His new book is Second Opinion: A Doctor's Notes from the Inner City.
Read more by Theodore Dalrymple