Earlier this afternoon, that’s how it began. In a large room crowded with Hillary Clinton supporters and plenty of press, including myself, the final steps were unfolding. The event was begun by Philadelphia’s Mayor Nutter, who started by praising the speech Hillary gave last night, then called for unity. When Hillary was introduced, the crowd went wild. When she began speaking, it was a continuation of last night’s strong unity call.

In a show of gratefulness, to both honor her supporters and display unity, Clinton thanked her delegates and acknowledged them all yet again and all they’d done for her. Then, without any fanfare but certainly with finality, she released her delegates to vote for Barack Obama. It was greeted with disappointment and a yell of “no!”

“It’s tradition to have a roll call. … As part of that tradition, I am here to release you. I signed my ballot today for Senator Obama. We have an election to wage and an election to win.” – Senator Hillary Clinton

During Clinton’s call for unity, chants broke out, as well as calls to have a full roll call vote. Some just won’t give up. Hillary did all she could to honor her supporters, but made it clear that Democrats must come together to win in November. She also, however, realizes, that she doesn’t own anyone’s vote.

“What that means is that both Senator Obama’s name and mine will be put into nomination this afternoon. I have spoken to many of you who have expressed your questions about what you should do. Many of you feel a responsibility to represent your voters. Others of you want the chance to vote what’s in your heart. Still others will be voting for Senator Obama because they want to demonstrate their commitment to the party and the nominee. So I am not telling you what to do.”

No doubt some will think she should have done just that: direct her delegates to cast their votes for Barack Obama. She’s made herself clear on all counts. Barack Obama will be the nominee, which was made official later this afternoon.

Once the roll call began, state after state weighed in. California and Illinois yielded. … It finally came to New York. The cameras panned to the the New York delegation as the political theater began its crescendo.

Senator Hillary Clinton was down on the floor when New York weighed in. The floor broke out in cheers and more chants. Then Clinton presented the acclamation. The message was clear cut. Let’s declare together in one voice, right here, right now, that Barack Obama will be our nominee.

Clinton then announced in formal language a suspension of the rules, what was needed to make it official, with New Yorkers all around her and the crowd cheering. The hall seconded Senator Clinton’s suspension of the rules and that was that. Barack Obama finally had the number needed to be the first African American in United States history to win the Democratic nomination for President of the United States.

It’s been an extraordinary year for Democrats, having a woman and an African American making history in the same election season, especially two people as incredibly talented on all fronts.

Hillary Clinton went a long way to changing women’s role in politics forever. Next time it will be that much easier for one of us to go all the way.

So, it was a fitting finale, when at around 3:49 Mountain Time, Hillary Clinton was the one to propel Barack Obama to the nomination officially. It was a class ending to a grueling battle.

Hillary Clinton took the stage last night and didn’t waste any time in getting to her mission, the moment where she turned the tables on the media-driven drama to give a wholehearted plea for unity and coming together that could only be ignored by those who never had any intention of listening to Hillary in the first place.

Oh, but one problem. Was Hillary too good?

Rank-and-file Democrats could hardly have asked for more. Which may actually create a slight problem for Barack Obama. Did Clinton do too well?

That’s always been Hillary’s problem. No matter what she does she’s damned.

Except when someone opens their ears and hears, at least for a moment. Cue Dahlia Lithwick:

The fact that she ran circles around the men tonight reminded me why the glass ceiling with the 18 million cracks in it really is poised to shatter. I can’t recall a woman rocking a convention like that, ever.

That’s because no woman in political history has blown the roof off like Hillary did last night. And, oh, what a catbird seat I had. Doing political analysis before and after the speech, I was skybox center. 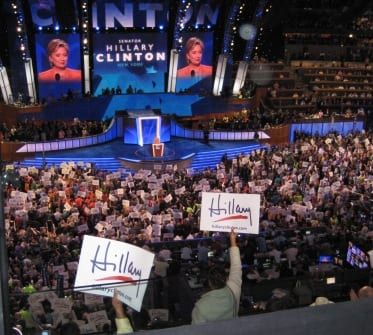 Hillary also didn’t hesitate to let Bush and McCain have it.

Now, with an agenda like that, it makes perfect sense that George Bush and John McCain will be together next week in the Twin Cities, because these days they’re awfully hard to tell apart.

But you had to be in that hall to feel, hear and sense the anticipation before, the excitment as she entered, as well as the shared passion when Hillary’s words took flight. She simply blew the guys before her away.

Hillary not only did what she needed to do last night, she did it to the power and honor of the 18 million cracks in that commander-in-chief glass ceiling she shattered.

Of course, there will be some unhinged fringe who won’t take her words and turn them into action for Obama. But these people are on their own now, to spin their webs alone, because Hillary has asked everyone to put that all behind and most of her supporters will. She’s asking everyone to remember what’s at stake.

I want you — I want you to ask yourselves: Were you in this campaign just for me, or were you in it for that young Marine and others like him?

Were you in it for that mom struggling with cancer while raising her kids?

Were you in it for that young boy and his mom surviving on the minimum wage?

Were you in it for all the people in this country who feel invisible?

Last night Hillary proved that she’s not only the most important and powerful female ever to run for president and almost land the nomination, but that she’s earned the respect of every Democrat who believes that this country cannot afford four more years of George W. Bush policies, led this time by John McCain.