Parade of Fools Set to Descend on Washington

Next week the liberals will troop to Washington en masse to celebrate the inauguration of President Barack Hussein Obama. But not satisfied with having won the election and expanded their power in the House and Senate, the loonier leftist extremists are committed to putting their peculiar brand of nitwittery on parade throughout the inaugural festivities.

It all started with a left-wing hissy fit over Pastor Rick Warren being invited to give a prayer at the inauguration. Now we have the atheist element in the Democratic Party protesting prayers of any sort at the inauguration combined with the “gay, lesbian, transgender, etc.” crowd launching specific denunciations of Warren due to his Biblically-based admonitions against sinful behavior and gay marriage.

Apparently, neither of these groups has figured out that the ongoing policy input that Warren can expect to provide to the Obama administration is akin to the “play calling” input that a pastor giving a pregame prayer at a football game generally makes after the opening kickoff: none.

Nevertheless, actress Anne Hathaway is among the liberal representatives from Hollywood who will make their disgust with Warren’s involvement known through their display of anti-Warren ribbons. The protest ribbons are white ribbons tied into a knot. Anne hasn’t yet indicated whether she will be wearing a second ribbon of some other color to denounce longtime boyfriends who plead guilty to 14 counts of fraud and money laundering like her own boyfriend, Raffaello Follieri. Apparently, Anne is much more tolerant of big-time international crooks and scammers than she is of Christian pastors.

The inaugural parade is also in the target sights of the left. The political correctness police are on patrol to make sure that the parade does not include any expression, logo, group, or sentiment that might create some real or imagined slight. The Roosevelt High School marching band from Wyandotte, Michigan, will be the only group of high school musicians from Michigan marching in the parade. But a letter threatening litigation from Harvey Gunderson, who claims to be president of Religious Americans Against Indian Nicknames and Logos, put a damper on the band’s excitement.

The band has been known as the Marching Chiefs since the 1950s, but to avoid controversy the school district agreed to drop their name for the day and sew patches to cover the Chiefs logo on the shoulders of their band uniforms. After the story received national publicity nonetheless, the school district decided to drop the “Chiefs” moniker on their banner but will stop short of covering up the Indian head logo on the uniforms. 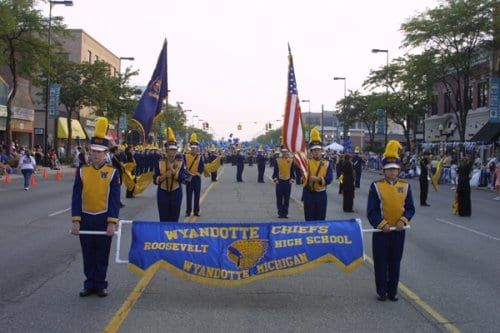 It is not clear what, if any, connection that Harvey Gunderson has to any Native American tribe, but the actual chief of the Wyandotte Nation in Oklahoma, Leaford Bearskin, is supportive of the use of the logo and “Marching Chiefs” name by the school. But what does Chief Bearskin know? He is just a real Wyandotte Indian chief rather than some liberal nitwit expressing outrage on behalf of others. In fact, Gunderson isn’t very happy about Bearskin’s viewpoint. These ignorant Wyandotte Indians don’t even know when they should be offended; thank goodness Harvey is available to be outraged for them!

The Chiefs are not the only parade participants under fire. The Azalea Trail Maids from Mobile, Alabama, are catching flack from the president of the Alabama NAACP. Edward Vaughn believes that the pastel-colored hoop dresses and bonnets worn by the goodwill ambassadors from Mobile serve to promote slavery. Over the past 60 years the Azalea Trail Maids have appeared at events like the Macy’s Thanksgiving Day Parade in New York and at presidential inaugurations in 1985 and 2005. Nearly a quarter of the current Azalea Trail Maids are minorities. But that is apparently not the point for Mr. Vaughn, who says they will be the targets of derision at the inaugural parade. Maybe he and Mr. Gunderson should sit together at the parade and share their joint outrage.

In the next week, there will certainly be other groups involved in the Obama inauguration that will spark some sort of controversy. In fact, just wait until radical Hispanic organizations like LULAC and MALDEF figure out the origins of the nickname “Volunteers” that applies to the University of Tennessee! In 1846 President James K. Polk, a Tennessean, requested a 2,800 volunteer soldier quota from his home state to fight in the Mexican-American War. Some 30,000 Tennesseans offered their services, solidifying Tennessee as the “Volunteer State.” A lottery system was used to determine which of the volunteers would actually get to serve in the units that later fought bloody battles in Monterey, Vera Cruz, Cerro Gordo, and Mexico City.

What is supposedly a day intended to unite the country behind a new president and celebrate a peaceful and democratic transition of power is quickly devolving into a parade of liberal extremist pet peeves. Perhaps we should just put the parade participants on the sideline and let these varied interest groups march down the street displaying their particular grievances and agendas. America would then have a clear picture of who is actually moving into power in Washington.