The final jobs numbers are in for 2014, and unless we get some exceedingly unlikely downward revisions, the news is pretty good — or at least better than “the new normal” we got all too used to during President Obama’s first term. And for that good news we can thank bad governance.

First off, the numbers.

The Wall Street Journal detailed that although wage growth was “tepid,” jobs gains were the best since 1999, with an annual total of three million new jobs added. Don’t believe for one minute the official unemployment rate of 5.6%, because the Polar Bear Club-level shrinkage in the workforce makes an unfunny mockery of the BLS’s headline number. The labor force participation rate hasn’t been this low — 62.7% and declining — since Fantasy Island debuted on ABC exactly 36 years ago today.

So what’s behind the shockingly pleasant news on employment? During President Obama’s first term, federal spending as a percentage of GDP was never less than 22%, and as high as nearly 25%. That’s a significant increase over the postwar norm of 18-19%, reaching highs not even seen when FDR was radically increasing spending as a part of his New Deal.

This chart (courtesy of usgovernmentspending.com) explains: 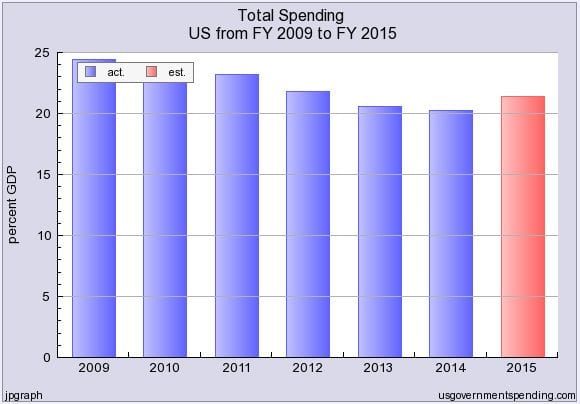 (I’ll pause here from our story for just a moment to take note that President George W. Bush, whom Obama derided as a prolific spender [and he was], kept spending within peacetime GDP norms, despite fighting two active wars. Obama has kept spending-as-a-percentage-of-GDP at peacetime highs, despite “ending” those wars.

And now back to our story.)

Obama had been sworn into office on the heels of the $700,000,000,000 TARP bailout package, and promised — and got, courtesy of Nancy Pelosi and Harry Reid — a flood of even greater spending increases.

Then a curious thing happened on the day Obama got his trillion-dollar stimulus package: The Tea Party was born. An even more curious thing happened after the Affordable Care Act was passed: The GOP won control of a House of Representatives which can only be described as having been out of control during the period when Pelosi wielded her giant gavel of magic spending.

The GOP House proved resistant to the kinds of spending measures on infrastructure and Democratic slush funds and whatnot Obama kept insisting on, and continued Democratic control of the Senate meant that budgeting became a thing of the past. Capitol Hill lurched from crisis to crisis, the only real results being the sequester and oodles of continuing resolutions. The sequester cut discretionary spending growth off at the ankles, if not at the knees, and the CRs have done a fair-to-middling job of restraining the rest.

(I’ll pause here another moment to note that when the People’s House is unable to significantly alter spending levels or priorities despite deep and sustained changes in its members and their governing philosophies, then we have a representative republic with deficiencies bordering on pathologies.

And now back to our story once again.)

It’s true that gridlock locked in continued levels of massive spending, but it also meant that new discretionary spending, the kind the Democrats enjoyed so much of from 2009-2011, was off the table. The result? The economy grew, and Washington’s share of it declined. Federal spending as a share of GDP last year was just a shade over 20% — the smallest share we’ve enjoyed under six years of Obamanomics. 2013 wasn’t much worse, and we had decent job growth that year, too.

If the Left wants to claim that massive spending early in Obama’s first term saved us from another Great Depression, I’d be willing to stipulate the point — provided they concede that restraint in the years since has given the private sector the breathing room it needed to get some people working again.

And if not? Then I for one welcome two more years of terrible, horrible, no good, very bad governance — which is about only thing Washington produces with any regularity. But this once it seems to be working for us.