21st Century Britain: You Say You Want a Devolution? 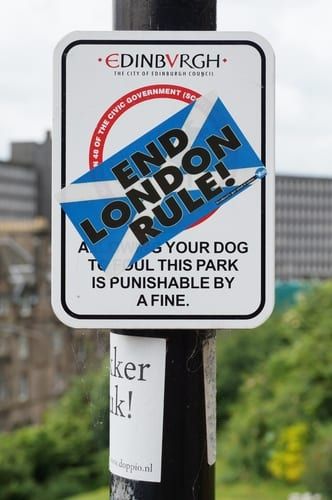 Sign on display in Edinburgh, Scotland on June 22nd in anticipation of the vote on September 18th. (Photo by EQRoy / Shutterstock.com)

In the end, it wasn’t even close. Scottish voters, turning out in record numbers, gave a decisive No! to independence from Great Britain by a better than ten-point margin. This puts an end to the Scottish National Party’s dreams for at least a generation, just as Quebec’s secessionist movement has quieted down greatly since losing in a much closer vote (49.42% to 50.58%) almost twenty years ago. British Prime Minister David Cameron’s position is strengthened by the result, but it remains to be seen if he can recover all the political clout he spent practically begging Scotland to vote No.

The Scottish Parliament, first convened in 1999 following former PM Tony Blair’s promises of “devolution,” will gain additional local control over domestic issues such as welfare spending the North Sea oil revenues. The details won’t be worked out in the form of legislation before January, but the Scots might now find themselves in a weaker position to make demands than they were just a week ago. When independence was still a possibility, Westminster held the weaker hand. With the door now firmly shut on independence, the SNP may have to take what they can get, declare victory, and head back north.

But that doesn’t mean the devolution movement is dead in Great Britain — far from it.

Having seen the goodies Westminster dangled in front of the Scots, and a general dissatisfaction with the Parliament’s direct control over seemingly everything, smaller semi-nationalist groups are starting to find their own voices.

Most everyone expects Wales and Northern Ireland to make their demands for local autonomy. Both have large populations, and local histories distinct from England’s. The Six Counties of course are also separated from Britain by the Irish Sea, if such things mean anything anymore.

Cornwall, the west-pointing peninsula in southern England, could be another one of devolution’s focal points, if Cornish party leader Dick Cole has anything to say about it — and he certainly did on Friday:

The people of Scotland did not vote for independence, but the No vote was underpinned by promises of additional powers for the Scottish Parliament from David Cameron, Ed Miliband and Nick Clegg.

The three leaders of the Westminster parties claim that a ‘stronger Scottish Parliament’ would actually strengthen the basis of the United Kingdom.

This has huge constitutional significance and it would now be hypocritical for Cameron, Miliband and Clegg to deny the opportunity of devolution to Cornwall through its own National Assembly.

Perhaps Cornwall doesn’t hold enough sway to get everything it wants, but the Scottish movement has set enough of an example for them to at least try.

But are you ready to answer the… West Lothian question?

“The West whadda-whadda?” I hear you ask. The Wall Street Journal’s Nicholas Winning published a handy summary of it today:

In other words, the biggest region to seek autonomy from Great Britain might end up being England, herself.

Outrageous? Perhaps, but only on the surface. English devolution already has support from Labour, and also from the Liberal Democrats — the Conservatives’ own coalition partners. Near as I can tell from their 2009 party platform, the UKIP is in favor, too. So something’s gotta give, and it looks like the giving will be done entirely by Westminster.

Independence for Scotland is off the table. But even while losing Thursday’s vote, the independence movement has set the stage for deep, lasting, and constitutional changes to the nation known for 300 years as United Kingdom(s?) of Great Britain.