Profits Up, Earnings Down

If you’ve read the business headlines for the third quarter, everything appears to be on the right track. Take a look at some of these reports: 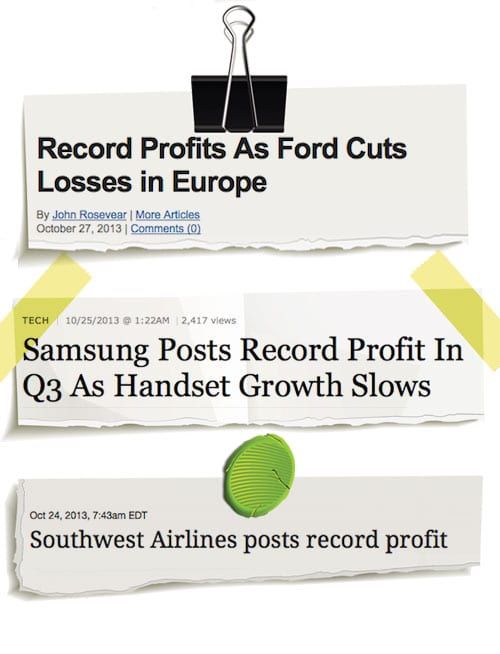 That’s just a small sample of what’s been a stellar season for profits. The good news seems to be everywhere — until you look past the big headline numbers.

Ominously, banks profits were up on the higher fees they charge you and me for simple services, but were down on job-creating investments. Most ominous of all perhaps, given how much work the Fed has done to reinflate construction, earnings and revenues were both down at Caterpillar.

If you’re not seeing a trend here, I just spent a lot of time on Google News for no good reason.

The belated jobs report was no more comforting. Just 148,000 new jobs created in September, with unemployment barely dipping to 7.2%, Our own Tom Blumer reports:

September’s report shows that the economy was already slowing down considerably before the partial shutdown commenced. Employers added only 148,000 jobs in September, down from 193,000 in August. The BLS’s Household Survey showed only 133,000 jobs added. Sure, the unemployment rate dropped to a seasonally adjusted 7.2 percent, but that’s only because a paltry 73,000 adults joined the workforce following a decline of over 300,000 in August.

As Tom noted later in his column, 30% of the new jobs created since President Obama was sworn in are temp positions — easy to hire, easier to fire.

Which is the crux of our problem, and why earnings are missing while profits are soaring.

ObamaCare’s employer mandate was supposed to kick in on January 1 of 2014, now delayed by executive fiat for one year. But the IRS will start looking back to January 1 of this year at employment practices, to determine how tightly to apply ObamaCare’s screws to each employer. Since that “look back” kicked in, part-time jobs creation has outpaced full-time job creation by three to one.

Between temp work and part-time work, America’s workers are feeling the squeeze. Insurance-premium increases will squeeze them further. That’s why earnings are down — under ObamaCare’s many unintended consequences, we just can’t spend as much money.

Those record profits? Businesses have done what they must do: They’ve cut all the fat. However, those kinds of cuts aren’t typical for a recovery. The U.S. economy enjoyed a hiring surge in the second half of 2009 and the first quarter of 2010, adding 250,000 or 300,000 jobs a month. Then ObamaCare became law and hiring slowed to a trickle, despite our economic recovery. Come the next downturn, employers will be forced to cut deep into the meat and bone right at the start.

And when that happens, it’s going to make this quarters’ missed earnings figures look like the good old days.